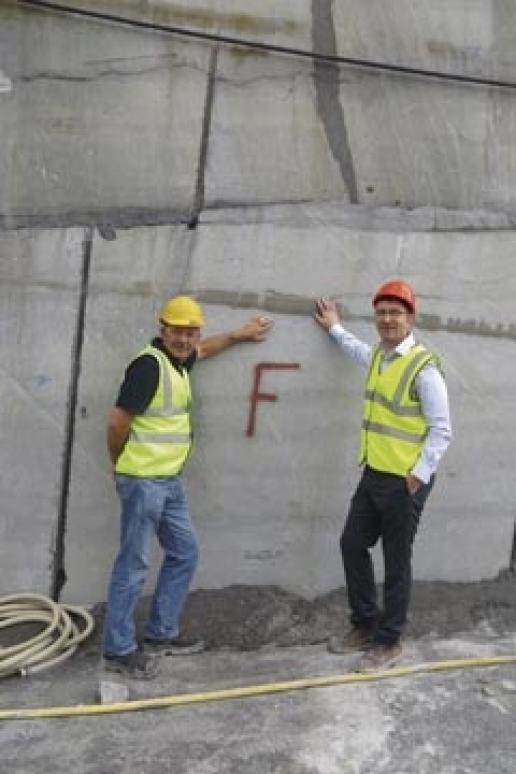 Stone Developments has re-focused its business on selling the limestone from its quarries for hard landscaping, for interiors and for building. Now it is expanding on the international market including the UK.

Stone Developments, which extracts and processes Irish Blue limestone, was at the Natural Stone Show in London in May this year, but it was there under the name of Erinstone.

Erinstone is a Belgian company. The product it was showing at the Stone Show was a composite tile with a ceramic backing and a face of Stone Development’s natural stone. The tiles are 13mm thick and can be up to 800mm x 800mm, thanks to the strength of the ceramic backing. The stone is a 3mm veneer.

Stone Developments bought Erinstone in 2003 to protect their interests in Belgium and Holland, which buy a lot of the Irish stone because it matches the Belgium Blue used for hard landscaping and products such as cills and doorsteps in buildings.

When the Belgians started buying the Irish Blue stone in the 1980s, it gave the Irish quarries a major boost. Stone Developments supplied Erinstone, so when the owner wanted to sell up 10 years ago, Stone Developments was keen to buy the business to maintain its route to a lucrative market. At the Stone Show, Erinstone’s aim was to introduce the brand to the interiors market in the UK, especially as the sector is so keen on the blue-grey colour scheme that the Irish stone offers.

The Erinstone push marks a resurgence by Stone Developments after the credit crunch crash that hit Ireland even harder than it did the UK.

After 2008, Stone Developments pulled out of contracting and cut its number of employees from 235 to 85.

“With the recession, every builder that went bust brought down someone who owed us money,” says Paul Ryan, the Managing Director, at Stone Developments’ head office in Old Leighlin in Co Carlow. “It almost brought us down.”

By 2010 Stone Developments had developed a new strategy. It stopped importing stone for the Irish market (apart from a few memorials) and concentrated on its core strength of its own compact crinoidal limestone with a rich fossil content of mainly brachiopods and polyps formed 340million years ago. It focussed on exports as the Irish market was showing little sign of recovery and Erinstone was the ideal vehicle for promoting the stone in Europe.

At the end of 2011, Stone Developments carried out extensive research to establish the size and value of the market for hard blue limestone.

The stone is available from Ireland, Belgium and Vietnam. The combined sales amounted to l115milllion. Stone Developments had a bit less than 10% of that market, making it the third biggest player in the sector and the largest in Ireland and the UKâ€ˆwith about 44% of that market, which it valued at l7.5million.

From its two quarries – Old Leighlin and Holdensrath – it produces about 8,000m3 of slab and finished stonework a year, 85% of which is exported, mostly to Belgium, much of it as paving.

In the UK, Pat Conlon had decided it was time to retire in 2010. Other companies wanted to represent Stone Developments and after some negotiations agreement was reached with hard landscaping product suppliers Hardscape, which has offices in Bolton, Stratford upon Avon and Northern Ireland and representatives covering the whole of the UK.

“That’s worked very well for us,” says Paul Ryan. Stone Developments has just finished a bus station in Stoke on Trent and Hardscape has sold the company’s stone for other projects in Manchester, Birmingham, Edinburgh, Glasgow, Sheffield and London. “We have great hopes for the UK, even though we’re really a small part of the market,” says Paul.

Stone Developments has also struck up a partnership with a company in Holland called Struyk Verwo. It sells mostly concrete products but was keen to add the stone to its repertoire.

The Irish company has priced some jobs in France and has spoken to people it knows in Canada and the USA. It has even supplied a project in Hong Kong.

Across its two sites, Stone Developments is geared up for mass production with its primary saws (two Pelligrini wire saws, two 3.5m Gilbert disc saws, a BM, two Maggi and two Simec frame saws), a secondary GMM Radia, three GMM Axias, a Gilbert and a small Gregori Impala, three Cortan and one Pelligrini texturing lines, and a Simec polisher. Nevertheless, like many quarry operators, it particularly likes bespoke production, even when that presents the kind of challenges faced by the restoration of St Mel’s Cathedral in Longford that was featured in the previous issue of Natural Stone Specialist.

A fire at the Cathedral meant 28 solid blue limestone columns, most of them load-bearing, had to be replaced. They had been built originally with the stone face-bedded to achieve heights for each section of as much as 1.8m. The fire had exposed the weakness of face-bedding and Peter Cox of Carrig, a stone and conservation consultancy in Dublin and Ireland, wanted the replacement columns to use on-bed stone that achieved the same dimensions. The trouble is that the limestone does not usually come in bed heights of 1.8m, certainly not consistently.

Brendan Costello, the Operations Director at Old Leighlin, says he had worked with Peter Cox for many years and even when they started talking about St Mel’s, Stone Developments was supplying the stone for another of Peter’s projects at the University of Limerick (which went on to be short-listed for the RIBA Stirling Prize this year – more about that in the next issue of this magazine).

“Peter had one very simple criterion: that the stone should be on bed and that it should be 1.8m high. That’s where the discussion started,” says Brendan.

Brendan did not believe the bed height required would yield enough stone to keep the project on schedule. In the end, a compromise was reached that the column sections should be 1.75m on bed. The sections had to be 1m diameter at the base and 800mm at the top. It was still asking a lot, but a particular area of just one bed of the quarry yielded what was required.

And although Brendan says Peter had one very simple criterion, in fact he had created a specification for the stone for St Mel’s that was not exactly simple. It strictly controlled fossil content and colour and required testing for a full analysis of strength and durability. Two, 10m2 panels of acceptable stone samples were created, one for the quarry and one to go on site, so both the manufacturers and the fixers could check to ensure the stones were acceptable.

“It was the first time we had used a system like this,” says Brendan, who ended up admiring it because it gave him a lot of information about the stone in different parts of the quarry.

Paul Ryan: “If we had had to quarry blind, we would have encountered many problems.” Brendan says he still had to quarry 12,500tonnes of stone to get 1,000tonnes of finished product, but that the method of recording the stone was “the most precise tool we have ever used in the quarry”.

Once blocks of the right size had been quarried they still had to be turned into the drums for the columns, which posed another problem, as they weighed about 4tonnes. A local engineer came up with a vertical lathe that used the weight of the stone to keep it steady (there was no tail stock) and cut it as it turned. Two complete columns were turned in three weeks, which was the fastest Brendan had ever seen the work performed.

For the bases and capitals, other local stonemasons were sub-contracted to keep the project moving to schedule.

Brendan Costello admits there were times when all the stops had to be pulled out, but all the stone was delivered on time.