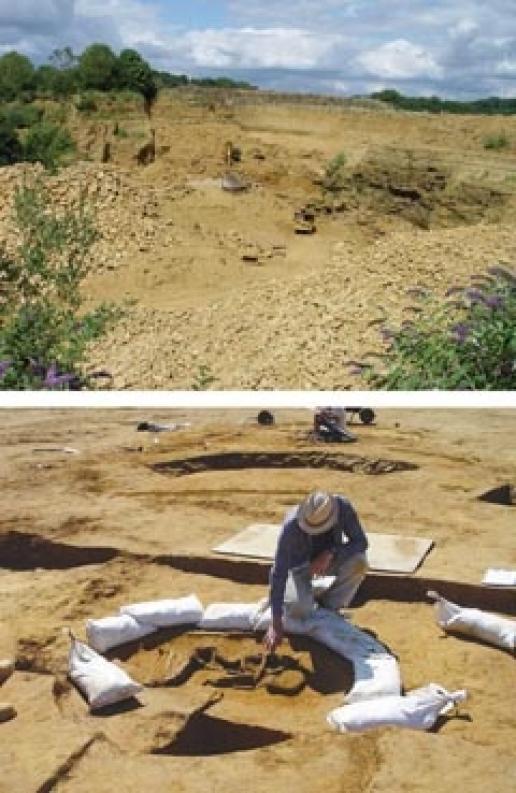 The Harveys' Norton Quarry on Ham Hill. A two-year archaeological dig on land that the quarry will be extended into has uncovered Iron Age remains, like the skeleton above.

An extensive three-year archaeological dig at Ham Hill is now coming to an end, leaving the way clear for the Harvey partnership to extend its quarry and secure supplies of the stone for the next 50 years. NSS went to see the latest developments.

Ham Hill limestone is a distinctive, characterful British building stone that has helped define the area near Yeovil in Somerset in which Ham Hill sits.

But times are changing, says Saul Harvey, who runs the family business, trading as Harvey, which is one of two companies still quarrying the stone from Ham Hill. Local demand for the stone for new build, conservation and renovation work is finite, especially since the downturn of 2008, and these days Harvey Stone relies on orders from further afield as well as local business.

Not that demand for Ham stone has not previously come from outside the area from which it originates.

Ham stone has been used since at least the times of the Romans and as communications have improved over the years its allure has spread geographically. It is now used to make a statement on interiors and exteriors in an ever broader area of the British Isles – and beyond.

Ham stone was notably used as cladding on Thames Court in London (pictured on the next page) and a current project using it is on Guernsey. And one of the orders that came as a result of exhibiting at the Natural Stone Show in London this year is from a company in Japan. “They are stone merchants there,” says Saul Harvey. “They spent an hour-and-a-half on our stand at the Stone Show.”

The geological feature that is Ham Hill is pretty big and the two quarries currently operational on it, like many dimensional stone quarries, are relatively small. Still, getting permission to extend them to keep supplies of stone coming is not made any easier by the Hill being a geological Site of Special Scientific Interest (SSSI), a Scheduled Ancient Monument with an Iron Age hill fort, a Nature Reserve and a Country Park.

In spite of that, Harvey Stone has obtained planning permission to extend its quarrying there, although a condition has been to fund a three-year archaeological dig.

The dig is now coming to the end. It has been carried out by Cardiff University, overseen by Cambridge University.

The quarry extension covers three acres and the dig has been carried out in three stages. The first was up to the existing quarry face in a strip running the length of the quarry so that the stone there would be available for extraction after the first year’s survey. The other two strips are either side of a central point on the quarry face going to the back of the site.

The permission lasts until 2066 and so should the stone… “if the stone is there”, says Saul Harvey, ominously.

Saul manages the family-owned quarry and masonry business with his father, Ray. They process other stones from the region – notably Portland and Bath – to reduce the amount of non-productive time on their six Wellcut saws and the Anderson Grice that is still working in the masonry works that sit on 11/2 acres of their 25acre site. The quarry accounts for another eight acres.

So, in the light of Saul’s comment, is there some doubt about there being stone under the land where planning permission has been granted?

He hopes not. Obtaining planning permission has taken a long time and is costing a lot of money. Winning the stone is not as easy as it might be, either, with around 10m of overburden to remove before the 20-25m of Ham Hill stone is revealed in beds that are normally up to 700mm or so deep.

But Saul cannot help wondering why there has apparently been no quarrying on this area of Ham Hill before. The stone has been taken from the hill for so long that there are not many areas of virgin land left. A century ago there were 12 quarries operated by the three estates that own various parts of Ham Hill. “Why didn’t they quarry here years ago?” he wonders as we walk over the area that is now the subject of the archaeological dig (you can read more about the dig at www.hamhillfort.info).

Marcus Brittain, an archaeologist with the Cambridge Archaeological Unit at the University of Cambridge, who is accompanying us, lifts the cover from a skeleton, still where it was found. It is not the first to have been found on the site. It appears to have been carefully buried with some ceremony.

Marcus says the dig has provided the opportunity to build up a better overall picture of the history of Ham Hill. They have found evidence of construction dating back to the late Bronze Age (1,000 years BC) and some artifacts from the late Mesolithic (6-8,000 years BC). By the Iron Age (800BC) the whole of Ham Hill was defended by the largest hill fort in England, covering 88hectares.

The archaeologists have also found some Roman relics and Marcus says there is evidence of Roman workings on the site that might have been quarrying.

Whatever the reason for the site not having been extensively quarried previously, Saul has not been disappointed with the stone that has been recovered so far. “We have some lovely stone coming out at the moment… so far so good,” he says.

The stone from Ham Hill is a superior quality limestone, up there with oolitic limestones such as Portland and Bath, which is why, like Portland and Bath, it has been chosen for buildings beyond its immediate area – although Saul admits the specification for Thames Court in London stretched the quarry to its limits with the bed heights required.

“It’s nice to do jobs like that but the stone is really better suited to traditional ashlar walling rather than cladding,” says Saul.

Before the collapse of the housing market in 2008, the Harveys partnership was supplying a lot of stone for building in its region. It was running three splitters five days a week and still struggling to meet demand. Happy days. There is still demand for split-faced walling, but these days there is only one splitter working. Houses that are going ahead now tend to use higher value ashlar and worked masonry.

And when it comes to masonry, there is no doubt about the quality of it because this is where Chris Berridge works, the young mason who won a Gold Medal at WorldSkills in London in 2011.

Not all masonry is worked by hand, of course, and when NSS visited, the Terzago Forma profiler was producing two 2.5 x 1.2m canopies as part of six months’ work making stone features for a big new house. Other features include a portico and a hefty bay window.

Another project that has kept the works busy is the production of masonry for repairs to University College School in London. There is so much stone there that renovation projects are on-going. Harvey Stone began Phase One a decade ago.

The variety of projects won by Harvey Stone has saved the company from having to make any redundancies as a result of the downturn. The business employs 13 people, including Chris Berridge and two other skilled stonemasons.

The planning permission for the quarry limits the amount of stone that can leave the site each year. Although that is not proving a restriction on the business, the company is keen to make the maximum use of the stone taken from the quarry face, so smaller blocks are sawn for jobs that do not require such large pieces of stone. “It takes longer to saw them, but even though the latest planning permission has given us plenty more years in the quarry, I don’t want to waste the stone. I’m keeping the bigger blocks for a job where we need them,” says Saul.

The product range also makes full use of the stone. As well as bespoke masonry, Harvey Stone sells standard walling products as split faced, ashlar, random rubble and dry stone walling. The newest line is stone for gabion walling, an example of which can be seen at the Light Box gallery in Woking, Surrey, where Ham Hill is a good match for the no longer available Bargate stone. Another 26tonnes of Harvey’s Ham stone are just going to make a feature gabion wall at a Holiday Inn in Stratford-upon-Avon.

The gabions can be used to make quickly erected boundary walls that have the desirable look of dry stone walling for prices that start at just £50 a tonne.

Other standard products include flooring in 500mmm widths and random lengths, and fireplaces, although sales of both have been hit by the housing slump. Harvey Stone will also fit locally.

The company is even involved in reclamation, buying in old Ham Hill stonework and other reclaimed materials that are valued in restoration projects.

It all adds up to a business that should ensure the distinctive Ham Hill stone continues to be available to preserve the vernacular attraction of this region of England, while also being available to be appreciated much more widely – even as far away as Japan.