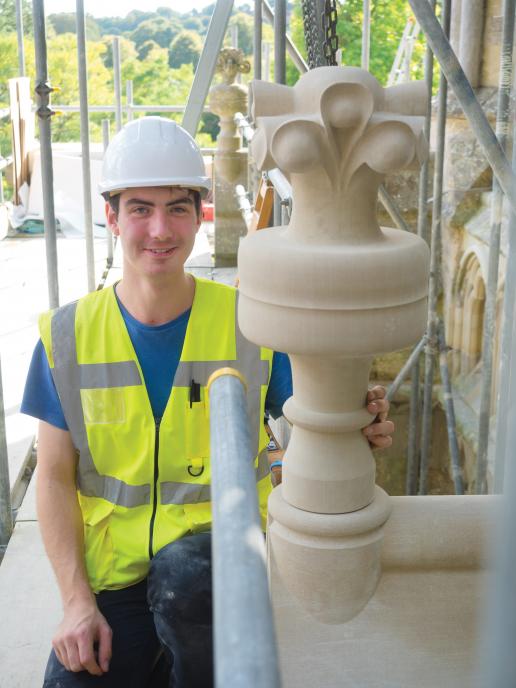 Christian Sullivan has ended his apprenticeship at Salisbury Cathedral by fixing the final finial, which he had carved, of the latest stage of restoration work.

Stonemason Christian Sullivan marked the end of his four-year apprenticeship at Salisbury Cathedral by fixing the last stone on the latest phase of the Major Repair Programme (MRP) to be completed.

Christian, who has now embarked on a Foundation Degree in Stonemasonry, spent the last two months of his apprenticeship carving a copy of a damaged finial for the south-east side of the Cathedral.

The original finial was damaged as a result of Victorian restoration in which the masons used an iron pin to fix it to the stone below. The iron rusted, splitting the finial. The new finial has been fixed with a stainless steel dowel.

Lee Andrews, who is Head Mason, also joined the Cathedral as an apprentice. He says: “Christian came to us looking for a job that would engage both his hands and his mind. As a mason you form a very strong bond with the Cathedral, learning as you work and getting to know the fabric intimately. It is no surprise that we have such a low turnover of staff here because people grow to love the building and the close team who work to preserve it.”

Christian says he had always wanted to work with his hands but had not particularly seen himself as becoming a mason before joining the Cathedral workshop. “It’s amazing to think that my work is now up there on the east side and will be for the next few hundred years,” he said.

Salisbury is one of nine English cathedrals that have their own works departments. Salisbury’s is headed by Clerk of Works Gary Price. As well as the stonemasons there are glaziers, a dedicated ecclesiastical carpenter and a lead worker. One stonemasonry apprentice is recruited every four years and it is a much sought after training post.

Gary Price had also joined as an apprentice, just as the current programme of repairs began – 30 years ago. He has worked his way round the Cathedral and has now moved on to the next phase of the project on the East end.