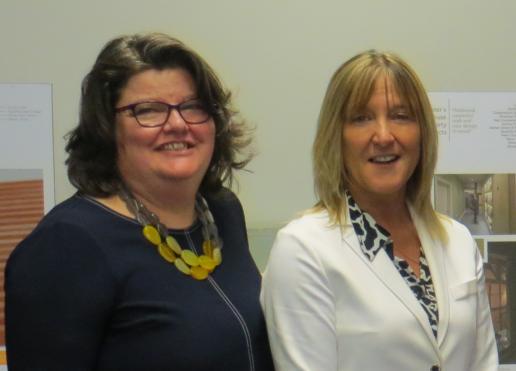 Claire Wallbridge (left) and Michelle Turner, whose many hours of work with other members of the group and the Institute of Apprenticeships have delivered Stone's Trailblazer apprenticeship published today (1 May).

The stone industry is a step closer to getting its own Trailblazer apprenticeship.

The Institute for Apprenticeships has today (1 May) approved and published the new standards for the Stone Trailblazer.

You can take a look at them here.

It involves a core curriculum with the following occupational options for routes to completion:

The apprenticeship is not quite yet up and running because an 'end point assessment' has yet to be agreed. Work will start on that next week (4 May).

When the government took over apprenticeships in 2013 it said they had to include a 'final exam' (now known as the 'end point assessment') that has to be administered by someone other than those involved in the training and will involve the colleges that teach stonemasonry.

The Trailblazer committee is always open to comments and suggestions from anyone within the sector who will be using or delivering the new apprenticeship, or who wants to help with the development of the end point assessment. Please contact Claire Wallbridge at the Natural Stone Industry Training Group on [email protected].

Trailblazer apprenticeships date back to 2013 when the government published a report of its review The Future of Apprenticeships in England: Implementation Plan 3. Its aim was to grow the number of apprenticeships available and put employers in the driving seat.

Michelle Turner, a Director of the company Stone Restoration Services, has headed the group that has developed the apprenticeship.

As this was new territory for both government and industry the road has been long and sometimes difficult but the industry was keen to achieve an apprenticeship as part of the construction industry and is almost there.

The publication of the apprenticeship is a significant milestone for the sector that has been achieved as the result of many hours of work by the Trailblazer Committee led by Michelle.

I'm delighted to learn about this industry apprenticeship. I have worked in the stone industry, sales and project management for 20 years, the last 11 being in Cape Town, South Africa. My partner and I have been looking to introduce a similar programme to this for a long time in order to bring a level of professionalism to the labour force employed in the industry here. I wonder if we could engage with you about running your apprenticeship programme and accreditation here in South Africa. Email address: [email protected]