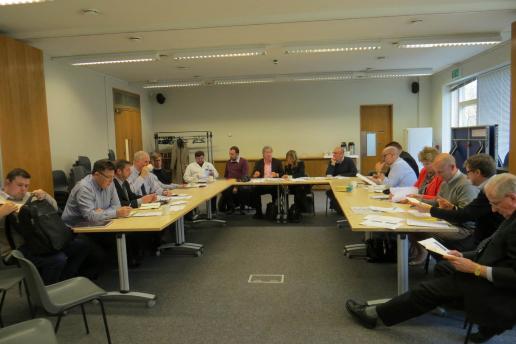 The meeting of the Stone Industry Training Group at the Building Crafts College in March.

The Natural Stone Industry Training Group (NSITG) met this month (22 March) at the Building Crafts College in London to discuss the Government's proposals for what it calls Trailblazer apprenticeships.

There will be a report from the meeting in the next edition of Natural Stone Specilaist magazine.

The money will be used for grants given to those who train, although in future, being in the driving seat will also mean picking up the tab for a third of the cost of training as grants will only cover two-thirds of the cost. They currently cover it all.

Apprentices will need to demonstrate their competence through 'rigorous and holistic' assessment. This will focus on the end of the apprenticeship (what most of us would regard as an exam, or test) to ensure that the apprentice is ready to progress.

The new standards for apprenticeships are intended to be short and easy to understand, setting out the knowledge, skills and behaviour (KSBs, as they are already being called) that individuals will need in order to be considered fully competent within an occupation.

To be accepted by the Government, the industry apprenticeship proposals have to include a minimum of 10 companies willing to carry out training under the scheme. The stone industry does not have 10 companies prepared to be Trailblazers currently, but Ian Major, who heads Stone Federation's training arm, StoneTrain, believes they will be forthcoming. Those from the stone sector at the meeting this month were:

There is no upper limit on how many companies can be involved, so anyone else who would be interested in taking on Trailblazer apprentices should email Ian Major at [email protected].

You might like to read what the Bishop of London, The Rt Revd Richard Chartres, had to say about the apprenticeship proposals, which were part of the Enterprise Bill, when he spoke in the debate about it in the House of Lords in October. Click here to read his comments.