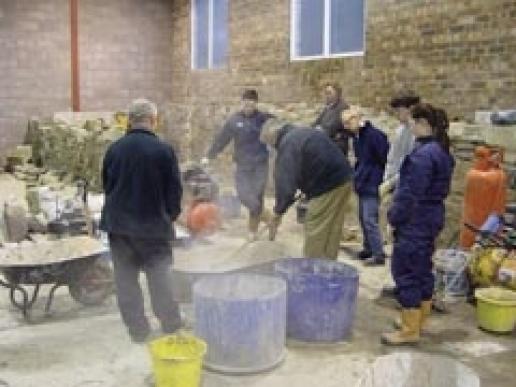 Slaking lime on a course at the Scottish Lime Centre.

Lime mortars and renders are inordinately more friendly to stone construction than hard cements. Specifying and using them, however, requires some specialist skills. If you are looking for those skills the Scottish Lime Centre can throw you a lifeline.

The benefits of using lime mortars when building with stone were only rediscovered in the late 20th century in the light of accelerated decay caused by the use of hard cements.

When mortar is impervious it traps water in porous masonry. And when the mortar is harder than the masonry, any movement results in cracking of the masonry rather than being accommodated by softer mortar.

Lime mortar is both softer than stone and porous to allow the migration of water so it is not trapped in individual pieces of stone that can then be damaged by salt crystallisation and sometimes freezing.

The first patent for Ordinary Portland Cement (OPC) was granted in 1824 and, because it was a commercial product that was marketed as being stronger, more predictable and easier to use than lime mortar, it quickly replaced lime, even more so in the UK than on the Continent.

When OPC was first produced it had a strength of 1-2 Newtons per square millimetre, not significantly different to lime, although it set more rapidly. Over the years the process of making cement has developed and OPC today is typically 56 Newtons per square millimetre. As the strength of the cement increased, so did the problems associated with using it for building with stone and it has been blamed for accelerated decay of stonework as a result.

As Craig Frew at the Scottish Lime Centre says: “There’s this over-emphasis on how important the strength of a mortar is. What you really want is very high vapour permeability to allow moisture to dry out very quickly. There’s virtually no vapour permeability in a modern cement.”

Lime cements, renders and plasters have been used successfully for building for millennia. There are 2,000-year-old Roman walls still held together by their original lime mortars.

From the end of the 18th century lime was produced commercially at Charlestown on the estate of Lord Elgin, although that industry came to an end in the mid-20th century.

It is on land leased from the Earl of Elgin at Charlestown, in Fife, Scotland, that the Scottish Lime Centre today continues the traditions of making lime mortars using the local limestone that produces a naturally hydraulic mortar (ie one that can set in the presence of water by a chemical reaction).

The Scottish Lime Centre is an internationally accepted authority on lime, providing analysis and consultation services and running a variety of courses to help both professionals and craftspeople get a better understanding of lime products.

The courses are held in such high regard that although they are attended by Scots, the locals are usually outnumbered by others from England and elsewhere in Europe.

The Lime Centre was opened in 1994 by Pat Gibbons, the Senior Architect with Historic Scotland who was Director of the Centre before Roz Artis-Young, the current Director. Roz was involved in the early days, joining the lime centre after gaining a degree in geography followed by post-graduate studies in building conservation.

By the time the Lime Centre was established, the skills of making and using lime had been largely forgotten by the construction industry. However, there was a growing awareness that hard cements were damaging masonry and a interest in lime was being rekindled.

“There was a dirth of knowledge about lime,” says Roz. “The most important thing we have learnt is that lime is not tolerant of bad site practice and poor specification.”

Craig adds: “Most of the work we do is preparing specifications, both for repairs and new build.”

In July last year the Lime Centre opened a new training centre next door to Masons Mortars for the practical part of their courses. The first course they held there was ‘Traditional Walling’, which involved the construction of a stone wall (pictured above) that has subsequently been used for the pointing courses that are also run there. The practical elements of the courses normally involve burning limestone in a kiln that those on the courses build themselves.

Limestone is basically Calcium Carbonate (CaCO3). Reactive silicates within the stone make it hydraulic. The ingredients are essentially the same as those for making hard cements, which are also hydraulic, although for lime the stone is burnt at lower temperatures. It therefore requires less energy to produce and so produces less CO2 in its manufacture.

Quicklime looks like what it is – lumps of burnt limestone. But it is highly reactive with water and when water is added to it (in a process called slaking) the lumps break down to become Ca(OH)2 amid a cloud of steam. A small amount of water will produce a dry powder, which is what is sold in bags for mixing lime mortars. If more water is added it becomes lime putty, which is also sold.

To make mortars and renders, the hydrated lime is mixed with sand, aggregates and water, just as hard cements are. Lime takes longer to cure than hard cement so the 28-day strength test normally associated with hard cements is largely irrelevant, although lime mortars never achieve the strengths of OPC. As the lime mortar cures it re-absorbs Carbon Dioxide to return to its original state as Calcium Carbonate. It is more environmentally friendly than OPC.

She is now in her 15th year at the Lime Centre and she still finds the project fascinating. “I got involved because I wanted a job in conservation and I couldn’t have chosen a better one, frankly.”

Anyone involved with stone, especially in the conservation sector, should have a knowledge of lime as part of their repertoire of competencies. And there is no better way of gaining that knowledge than attending the 1-to-3-day courses at the Scottish Lime Centre.

If you need help identifying, specifying, analysing and using lime products, the Lime Centre also has the skills and resources (such as its own laboratory and one of the largest sand and aggregate libraries in the UK) to help you through its consultancy services. You can find out more on their website. The web address is at the top of this page.