Training: Trailblazers reaching the end of a long and winding road 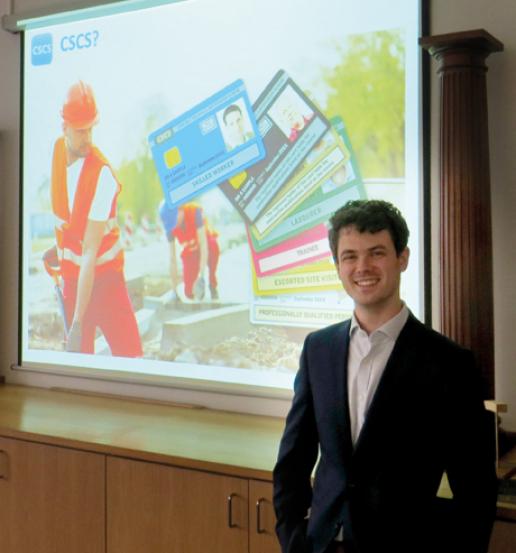 Joe Gibbons from CSCS explaining the changes to skills cards during the NSITG annual meeting.

The stone industry seems to be reaching the successful conclusion of its attempt to get its own Trailblazer apprenticeship, said Michelle Turner, Chair of the Natural Stone Industry Training Group at its annual meeting in February. It has been a difficult journey that started in 2016.

From the outset it encountered difficulties when it was discovered the Natural Stone Industry Training Group (NSITG) proposal had been unexpectedly and surprisingly superseded by a proposal from Specsavers.

A discussion with Specsavers cleared that up and then the stone industry wanted a two-tier apprenticeship with ordinary (level 2) and advanced (level 3) categories, but the government has required a single masonry standard. The reason it has claimed apprenticeships for itself is so that each industry has just one apprenticeship that is clearly understood and means the same thing to everybody.

Industries have to work with the Institute for Apprenticeships & Technical Education (abbreviated as IFA), described by itself as an employer-led Crown Non-Departmental Public Body. It means it was established by the government but is a step removed from it. IFA appoints people to work with industry to establish the Trailblazer apprenticeships.

But the evolving roles within IFA and its commitment to ensuring a future-proof standard has resulted in numerous changes.

IFA oversees the development, approval and publication of apprenticeship standards and assessment plans. It is also involved in developing T Levels, two-year technical study programmes that will become one of three major options for students to study at level 3 alongside apprenticeships and A levels.

Crucially, IFA makes recommendations on funding bands to the Department for Education for each apprenticeship standard and oversees External Quality Assurance (EQA) across providers to ensure quality, consistency and credibility. It puts what the industry wants into the formal requirements of the apprenticeship.

The apprenticeship will consist of core modules that everyone will take, which account for 60-80% of it, and optional modules for specialist areas such as memorial masonry (which has been developed in conjunction with the National Association of Memorial Masons – NAMM), interior fixer, exterior fixer, heritage mason, banker mason and façade preservation.

Stone Federation and its StoneTrain training arm have not been heavily involved in the development of the Trailblazer but will support it, with StoneTrain hopefully delivering some parts of it.

The apprenticeship will last two years and has to include off-site training and an end point assessment. Employers will determine when apprentices have reached what is called ‘Gateway’ and are ready to be assessed. Once successfully assessed, they will be entitled to CSCS cards straight away.

CSCS cards and the end of ‘grandfather rights’

CSCS Communications Co-ordinator Joe Gibbons attended the NSITG annual meeting to give an update on developments on CSCS cards and particularly the end of so-called ‘grandfather rights’, more properly known as industry accreditation.

He explained that the end of grandfather rights to CSCS cards had been brought about by Construction 2025, a document drawn up between the industry and government.

In doing so, it also wanted to standardise the criteria for obtaining a card and the most straightforward way of doing that was through industry recognised qualifications, typically NVQs, that can be verified online to ensure people on-site have actually been trained to carry out the jobs they are being employed to perform.

Industry accreditation lacks that verification, so those who do not have a qualification will have to get one in order to be able to hold a CSCS card after the end of 2014.

The difficulty with that is that someone who has been carrying out a job for a long time can resent having to go through an assessment procedure to obtain a qualification. Some people might simply decide they are not going to do it and the industry can ill afford to loose more skilled workers when it is already loosing some from overseas who are going home and recruiting from abroad looks like becoming more difficult.

No new cards have been issued on the basis of industry accreditation for several years, but cards already issued have been renewed – and Joe said there are 60,000 people who hold these grandfather rights cards. Because there are so many, the timescale for removing them all from the system has been set at five years from the start of this year. The cards will continue to be renewed in the meantime, but they will all expire on 31 December 2014.

Joe said those holding such cards will have to decide what they are going to do next. Some will have gained qualifications after obtaining their cards so will already have the necessary route to replacing the card. Some might simply decide to retire. Some will have qualified for membership of professional bodies such as the Chartered Institute of Building, membership of which qualifiers them for a CSCS card. Some will no longer need a CSCS card – the site visitor card is coming to end, for example, and visitors will no longer require a CSCS card to go onsite. But some will have to be assessed for at least a level two vocational qualification if they wish to continue to hold a card.

Joe emphasised: “This is not just mindless bureaucracy, it’s about having people who have the right qualifications for the job. Construction industry professionals are truly professional and we can prove it, that’s what we want to be able to say.”

Mark Priestman, who writes the regular column about training in this magazine, interviewed Alan O’Neile, Head of Communications at CSCS, about the changes to CSCS cards and the end of grandfather rights in November. You can read his report online at bit.ly/CSCSgrandfather-rights.