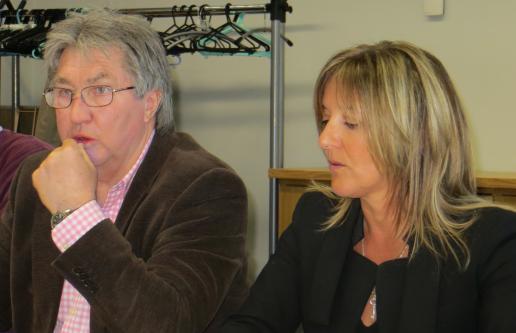 Ian Major and Michelle Turner were flummoxed when they discovered Specsavers had made a proposal for a stone apprenticeship, although all is now becoming clear. They hope the government Department for Business, Innovation & Skills will accept the stone industry's proposal for its own Trailblazer apprenticeship.

Trailblazer apprenticeships are a proposal by the government to claim exclusivity of apprenticeships. It wants them to be exam-led training programmes to benefit industry and the individuals being trained. Presumably it believes current apprenticeships do not live up to that standard, although not everyone in industry agrees.

A group of those from the stone industry interested in training met in March at the instigation of the Natural Stone Industry Training Group to discuss the matter. There was a less than enthusiastic welcome for the proposal but it was agreed that the industry had better develop a Trailblazer programme or somebody else would. (You can read a report from that meeting here).

The committe, chaired by Michelle Turner of Stone Restoration Services, met again at Weymouth in May to progress the industry's 'declaration of interest' to BIS, the government Department for Business, Innovation & Skills (more about that meeting here). A declaration of interest has to include an outline of what is proposed. The Stone industry proposed several streams: banker, interior and exterior fixer, memorial mason, stone carving, draughtsman, facade preservation and heritage craftsman.

The declaration was duly submitted only for BIS to say it could not be accepted because a proposal had already been received. It had been submitted by Guy Kidd, the National Apprenticeships Manager of Specsavers!

There can be only one Trailblazer apprenticeship for a sector because part of the government's aim is to clarify and simplify apprenticeships to make them meaningful and transparent to industry and those achieving them, so everyone knows what they mean and what the training has involved.

Michelle Turner tried to contact Guy Kidd, but he has been on extended leave of absense due, first, to a death and then a holiday. BIS was not helpful and would not let her see the proposal put forward.

Guy Kidd is now back at work. He explains that his expression of interest came about as the result of a number of small trades getting together to try to create an overall Trailblazer for them all.

Guy is the third person to chair his group, which came together three years ago. Its origins seem a little hazy, but it appears to have been instigated by, perhaps among others, Beth Davies, a Building Conservation Officer with North Yorkshire National Park, and London Livery companies.

It includes spectacle makers (hence Specsavers), blacksmiths, organ builders, hand engravers, clock & watch repairers, ceramicists and a variety of others, including the Victoria & Albert Museum and the Livery Companies' Skills Council. Various building skills are needed in the conservation of buildings and walls on the North Yorkshire National Park, including stonemasonry and dry stone walling.

Guy Kidd told Natural Stone Specialist magazine how the group he now chairs had developed its proposals. "They started down this craft apprenticeship route but soon realised they couldn't have one apprenticeship for so many crafts. It just didn't work. So we started to split it up."

Having now spoken to Michelle Turner, Guy Kidd says: "I'm happy we can all find a way forward." Whether that is together or not remains to be seen.

Michelle still wants the stone industry to produce its own Trailblazer. She is critical of BIS for being unhelpful. It has told her that its review of the proposals should be completed on Thursday (8 September), after which she and Ian Major, the convenor of the Natural Stone Industry Training Group and manager of Stone Federation Great Britain's training arm, StoneTrain, hope to talk with the Department again. Although Michelle says: "Someone said dealing with BIS is like walking through treacle. And it is. It's exactly like that."