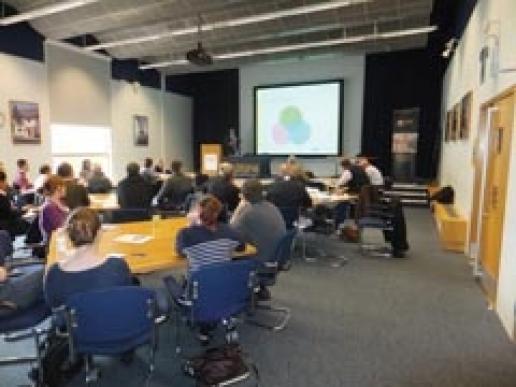 It can be difficult to know what to do to get stone’s sustainability message to customers. Conferences by BRE in Garston and York last month, organised by Stone Federation Great Britain with backing from ConstructionSkills, provided some answers.

Sustainability. Encompassing it is becoming a matter of enlightened self-interest because if you cannot speak the language of sustainability you are going to lose sales to those who can.

And that is not just a matter of opinion. Legislation is insisting it happens – for example, there are more changes on the way to Part ‘L’ of the Building Regulations next year as the Government continues towards its Kyoto Protocol commitments to carbon reduction that are enshrined in UKâ€ˆlaw.

So Stone Federation Great Britain, supported by ConstructionSkills and using the expertise of BRE, held two workshops last month (April) in an attempt to start enlightening its members on the subject. One of the workshops was at the BRE in Garston, Hertforshire, the other in York.

Presentations were given by Mike Jaggs and Flavie Lowres, both Senior Consultants with BRE.

As Mike Jaggs began by saying, sustainability is a huge subject that just gets bigger and more complex the more you look into it. However, it can be boiled down to three pillars: environmental, social and economic, often presented as the ‘triple bottom line’ of people, planet and profit. When all three are considered equally, development might be said to be sustainable.

The reason sustainability is such a big deal for construction is because the work of the industry can have a major impact on the reduction of CO2 emissions.

A lot of energy is used for heating and cooling buildings when they are finished and a reasonable amount more is encapsulated in the products used in building them.

Flavie Lowres said that 50% of all CO2 equivalent emissions in the UK are the result of the use of buildings and another 10% are accounted for by the manufacture and distribution of construction products.

That makes construction an obvious target for CO2 reductions when it is a relatively easy matter to make buildings carbon neutral, at least in use – as a tour of the BRE Innovation Park offered to those who attended the workshop at Garston demonstrated.

And, again, making buildings carbon neutral is not just a question of ecological soundness – it is required by legislation. The Energy Performance of Buildings Directive (in Part ‘L’ of the Building Regulations) will require all new buildings to be zero carbon from 2019.

Flavie mentioned schemes being used to determine the sustainbility of buildings, such as the Code for Sustainble Homes from the Department for Communities & Local Government (DCLG), BREEAM from the BRE, LEED from the Green Building Council in the United States and HQE from the Association Haute Qualité Environnementale in France.

Use of such accreditation sytems is growing fast. There are 200,000 buildings certified under BREEAM and a million more registered for assessment. The point is that it is no longer acceptable just to use vague terms about a building’s environmental credentials, the industry has to demonstrate it really is achieving them.

There are different categories of BREEAM, including one for refurbishment. The latest to be introduced is for domestic buildings.

So how does all this relate to the stone industry? Flavie Lowres said energy use and material sources would be most relevant, along with responsible sourcing and robustness.

She explained the difference between the carbon assessment of a product from cradle-to-gate (the point at which it leaves the factory), cradle-to-site, cradle-to-grave and cradle-to-cradle if it is being re-used.

She mentioned the different lifecycle assessments (LCAs), explaining that there was a Type 1 standard (ISO 14024) defining an envirnomental standard with an Ecolabel for those who pass; Type 2 (ISO 14021), which is a self-declaration such as saying a product is recyclable; Type 3 (ISO 14025) involving so-called ‘nutritional labelling’ that involves environmental product declarations (EPDs) determined by a prescribed formula and verified by a third party.

An EPD can be used to obtain a Green Guide rating giving BREEAMâ€ˆor Code credits, in building information modelling (BIM), or within a company, to start reducing your environmental impact by better use of energy and water, for example, to help towards achieving ISO 14001. Carbon footprinting is a simplified version of a lifecycle assessment.

Flavie Lowres explained the workings of the Green Guide, saying that methodology, which did not used to be published, is now shown on the Green Guide website. Different impacts have different weightings, and the weighting for water use has increased lately because of water shortages.

To create the Green Guide, BRE tested various uses of product systems, rather than individual products, and gave them a cradle-to-grave rating. So, for example, a system might have pre-cast concrete, insulation, stone external facing and plasterboard internally. That might achieve an A+ rating. If it does, it might make little difference to the system what the external stone is, so anyone supplying the stone for that system can justifiably claim an A+ rating for their stone as part of that system.

The Green Guide rates products according to their performance within the system being tested, and there are six categories, from A+ to E in each system, so the rating is a relative value rather than an indication of some specific level of CO2 equivalent output.

Nevertheless, an A+ rating is worth three points towards a BREEAMâ€ˆclassification (you need 90 points for an ‘excellent’ rating). You can add up the different rating for different parts of a building to give a total contribution towards a BREEAMâ€ˆrating. And if you have an EPD you get extra points.

The Government’s target for construction was to have 25% of products responsibily sourced by this year, although the UK Contractors Group has set itself the more exacting target of 75% by 2015.

One final point to be made is that this is a dynamic subject. There are new standards and targets being set all the time and new ways of achieving them. It is not a box ticking excercise that can be done once and forgotten. It needs director-level involvement to engage everyone in a company so that the culture pervades the whole business.

Mike Jaggs said companies should be taking a hard look at all the impacts they are having. “There’s legislation focusing directly at us which we have to make sure we are addressing. We need hard data – real data. How much do we actually contribute to emissions?”

He said individual firms should be assessing their impact, setting realistic targets for reducing that impact and making plans for achieving those targets.

And while reducing energy use, water use and waste is good for the planet, it is worth remembering it is also good for the bottom line.