Modern slaves in construction rescued in raids in and around London 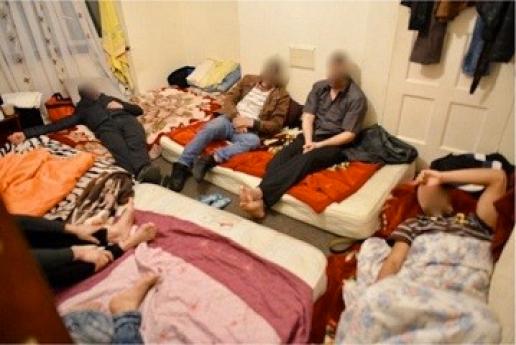 These are the cramped living conditions uncovered at a terraced house in East London, where 22 people were living.

Officers carrying out an investigation into the alleged exploitation of eastern European workers found 51 people living in cramped conditions at addresses in Barking, Walthamstow, Forest Gate, Ilford and Newham.

GLAA Senior Investigating Officer Tony Byrne said: “What you see in this picture [above] is fairly typical of the sorts of conditions workers - men, women and children - are living in right now throughout the UK and we will not hesitate to act on any intelligence we receive to protect vulnerable workers.”

Two boys, aged 15 and 16, were among 51 people found living in cramped conditions across the five addresses. They have spoken to the GLAA’s specially-trained officers and are now receiving help and support from a range of partner agencies.

The investigation, which was supported by the Met Police, was launched following allegations of labour abuse on construction sites across London, with threats of violence and false identities being used.

A 25-year-old Romanian man was arrested on suspicion of modern slavery offences. He has since been released under investigation as enquiries continue.

Those found inside the houses – who were aged between 15 and 56 – were spoken to and offered support. Ten of them were taken to a reception centre, where they are being given the opportunity to speak to specially trained officers about their circumstances.

Anyone who suspects slavery or trafficking offences are taking place in their community or workplace is urged to call the Modern Slavery Helpline on 0800 0121 700 or report suspicions to the GLAA on 0800 432 0804.