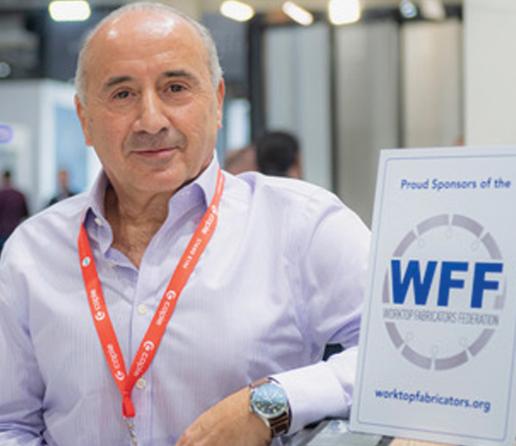 WFF Director Mem Zekayi: “There’s no such thing as a cheap quartz surface: the raw material always costs the same, so somebody somewhere is paying for a cheaper job.”

A report highlighting the extra risk to stone workers of respirable crystalline silica (RCS) specifically from working quartz has been published by the American peer reviewed medical magazine Chest and picked up by The Daily Mail.

The survey was carried out in the Bay of Cádiz area of southern Spain, where 106 people working in local, mostly small stone companies were diagnosed with AS (artificial stone) silicosis between 2009 and 2018.

Almost 40% of the masons who worked quartz developed lung problems and the lung capacity of a quarter of them worsened during the period of the study.

In spite of dust extraction systems, including wet systems, used by the companies involved in the study, harmful levels of RCS were still documented in workplaces. The study calls for more action to protect workers.

There are legal RCS exposure limits in Europe, the UK and the USA. In Britain, the workplace exposure limit was cut in 2006 from 0.3mg/m3 of air to 0.1mg/m3, requiring more stringent controls. The USA’s limit is half that of the UK’s.

Concerns about the danger of RCS from working quartz have been growing around the world, especially in America and Australia, for several years. You can read previous reports on the issue on this website. Just search for ‘silicosis’.

This latest report in Chest says some of the cases progressed rapidly, suggesting that what it calls AS silicosis is more aggressive than silicosis resulting from other exposures.

Chest interprets the findings like this: “Artificial stone silicosis rapidly progresses to PMF even following exposure cessation, and a significant percentage of patients experience a very rapid decrease in lung function.”

PMF is progressive massive fibrosis, a complicated form of pneumoconiosis. ‘Fibrosis’ means scarring is present in the lungs. It causes the loss of blood vessels and air sacs, so it becomes hard to breathe.

It can lead to lung cancer and other complications resulting in premature death.

The report concentrates on engineered quartz because the growth of its popularity as kitchen worktops has coincided with a growth in the incidence of silicosis among those working it. Until then cases of pneumoconiosis had been decreasing in the Western world.

It is not only quartz that has expanded the kitchen worktop market so much in recent years, of course, although it has led the way. Natural granite is also a popular worktop material and it, too, contains high levels of silica, as do porcelain and sintered stone products, although the high temperatures involved in their manufacture change the silica content to amorphous silica, which is not the same as crystalline silica and is not known to cause silicosis.

The report in The Daily Mail, one of the UK’s largest circulation daily newspapers, is not on its own likely to have much impact on sales of quartz worktops or the hard surface worktop market in general because there is no suggestion quartz poses any threat where it is installed, only where it is worked.

Hard surface worktops, whether quartz, natural granite, pocelain or sintered stone are inherently aesthetically pleasing so are not likely to lose their popularity.

Nevertheless, an industry’s reputation is hard won and can be damaged. Silicosis is not unknown in the UK stone industry, so vigilance of dust suppression procedures and employee testing for lung conditions is important.

You can download the Spanish research report in Chest from bit.ly/assilicosis.

There’s a lot more about RCS and how to control it from the Health & Safety Executive at www.hse.gov.uk/stonemasonry/silica-dust.htm.

The Worktop Fabricators Federation represents professional stone fabricators in the UK. Mem Zekayi, a Director, comments on the quartz worktop report (above):

Another sign of the times. With so little sport and celebrity gossip during lockdown, we’ve just seen a fresh spate of newspaper stories implying the safety of stone fabricators’ staff is being put at risk by poor working practices.

While we can’t comment on whatever conditions researchers may have found in Spain, silicosis risk is hardly news: British worktop manufacturers and our suppliers have been aware for many years of the potential dangers associated with poor workshop practice.

The UK worktop fabrication industry has led the way in insisting on wet-cutting, dust filtration ventilation and mechanical handling to reduce the risk to our workforce.  Responsible worktop fabricators are very aware of the risks of crystalline silica and respirable dust, and have strict health & safety control measures in place, including appropriate regular health screening.

One of the core reasons we set up the Worktop Fabricators Federation is because of our concern to ensure customers can have full confidence that the materials used to create their dream kitchen have been handled correctly. And that the fabricators and installers who create it are treated with proper respect for their health and wellbeing.

In a free market, it is not possible to prevent anyone buying slabs of quartz. Or from cutting and shaping them in customers’ gardens using angle-grinders or adapted joinery tools. This Spanish research serves as a reminder that one of the reasons properly-made engineered stone worktops command a price premium is the significant investment professional fabricators have made in wet-cutting equipment and properly controlled workshop environments.

We urge anyone who is thinking of commissioning a quartz worktop to talk with a WFF member about what it means to do the job safely and professionally.