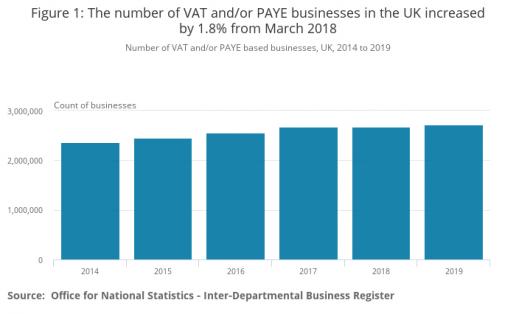 In business-friendly Britain the number of registered businesses continues to grow, with construction leading the way.

Construction saw the largest growth in the number of firms working in the sector in the year to the end of March 2019, according to figures just released (2 October) by the Office for National Statistics (ONS).

The number of companies and public corporations represents 72.5% of the total number of businesses in the UK, although there continues to be a gradual fall in the number of sole proprietors and partnerships.

The largest industry group is professional, scientific & technical, making up 17.4% of all registered businesses in the UK and accounting for 7.5% of the economy.

London remained the region with the largest number of businesses, representing 19.2% of the UK total.

But construction continues to attract most start-ups and although that is offset by some failures, the number of companies operating in the sector rose by 12,000 between March 2018 and March 2019. The largest number was of companies building or repairing houses.

The second largest growth in numbers was seen in the information & communication industry, which had an increase of 7,000 businesses.

Property had the strongest percentage growth in businesses at 4.1% and finance & insurance the second largest at 3.8%.

Apart from health, all industries that saw a fall in the number of businesses in them last year showed positive growth this year. Even the health industry saw a slow down in the fall of the number of companies involved. This year's decline was 5.9% compared with last year’s decrease of 9.7%.