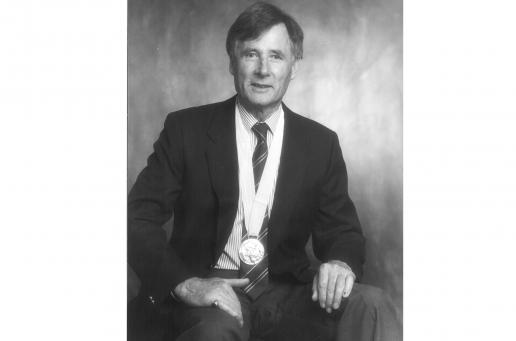 Eric Brookes MBE, a past President of Stone Federation Great Britain and a Liveryman and Honorary Court Member of the Worshipful Company of Masons, died peacefully at home on Saturday (18 May).

Fellow past President of Stone Federation, Honorary Court Member of the Livery Company and friend John Bysouth, who holds the Duke of Gloucester Gold Medal for his contribution to the stone industry, has written the following eulogy:

Eric, known to many of the older generation in the stone industry, has passed away at his home in Chichester. He was 97.

I first met Eric in the mid-1960s just after his appointment to the position of Surveyor / Clerk of Works at Chichester Cathedral. Along with the architect, Robert Potter, they were visiting the masonry contractors in London and the South East to assess the suitability of companies to carry out work at the Cathedral. They decided to set up their own workshop and employ the labour directly. From this was born the Chichester Cathedral Works Organisation that later became a private company owned by builder Osborne. It was the forerunner of what is today Chichester Stoneworks Ltd.

Due to a lack of suitable stone locally, Chichester Cathedral had been built using French limestone and it was decided to go back to France for supplies, mainly from quarries belonging to Rocamat. Eric saw the potential to act as an agent and promoter of the French stones in the south of England. This caused some alarm among the members of the London Association of Master Stonemasons (LAMS). Further consternation came when Eric - a competitor! - applied to join LAMS.

However, CWO did join LAMS and Eric became an active member of both LAMS and Stone Federation Great Britain.

On one occasion he organised a trip around some of the quarries in north-east France. It was a particularly memorable occasion, especially when by accident we ran into Rocamat's Swiss agents and enjoyed a libation together - a meeting not to be forgotten!

Eric became a good friend; someone you could share problems with knowing your discussions would be just between the two of you.

Eric’s funeral is on the 11 June at 2.45pm at the Chichester crematorium.

Eric's nephew, Stuart, has said that Eric loved flowers and as he is leaving a large proportion of his estate to charity, a floral tribute would be welcomed.