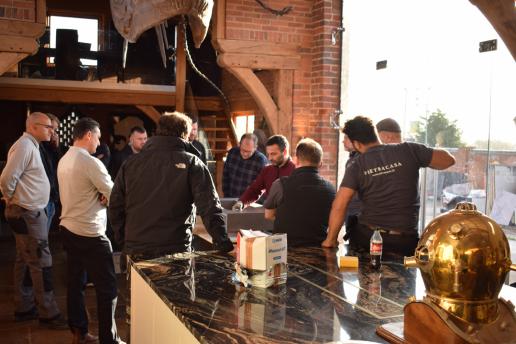 Roberto Colonetti gives some tips on using porcelain during his workshop at Planet Granite near Coventry.

A small group of stone fabricators gathered at Steve Murphy's Planet Granite premises near Arley, just outside Coventry, this week for a three-day training course on using porcelain.

Cutting large format porcelain and sintered stone has caused stone fabricators some problems. The tension has to be taken out of most of the materials by cutting off the edges and then the cuts have to be made carefully and in the right order and direction to avoid the material snapping. Saws have to work slower with more water to cool and lubricate the blade. Then there are all sorts of requirements for installing the material, such as insulating it from hobs and ovens.

Nevertheless, the companies making the materials are putting a lot of money into promoting them and orders are coming through, so fabricators want to know how to get the best out of the materials. And they are learning. 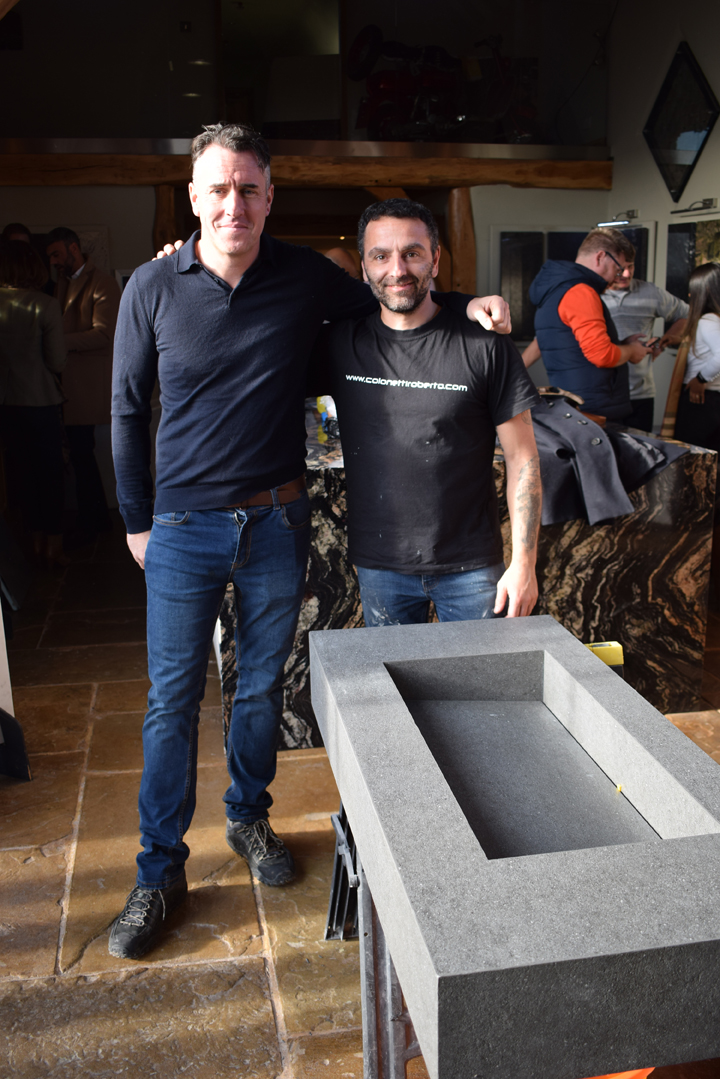 Roberto Colonetti is helping them to learn – all over the world. This was his first visit to the UK. He and Steve had made contact on social media. Once the Planet Granite workshop was over on Thursday, Roberto was off to Iowa in the USA to start another course the following day (Friday) and then back to Europe for a course in Italy. He anticipates returning to the UK to present another workshop in March.

Roberto was running the three-day course at Planet Granite, sponsored by tile manufacturer Porcelanosa, which introduced its own large format porcelains this year under the name of Atlas Plan (read more...), distributed by The Thomas Group.

Roberto, originally from Italy and now based in Perth, Australia, working for a company called European Ceramics, which sells just that, was also sponsored by the maker of the CarCol glues he was using, although they have to be bought from Italy, where they are made, as nobody is distributing them in the UK.

Wedi also sponsored the event and each of the sponsors gave presentations about their products during the three days.

The fabricators had paid £500 each to attend. Those NSS spoke to thought it was good value. Not just for what they learnt during the three days, but also because it meant they would be able to call on Roberto in future if they had any problems or projects they needed help with. 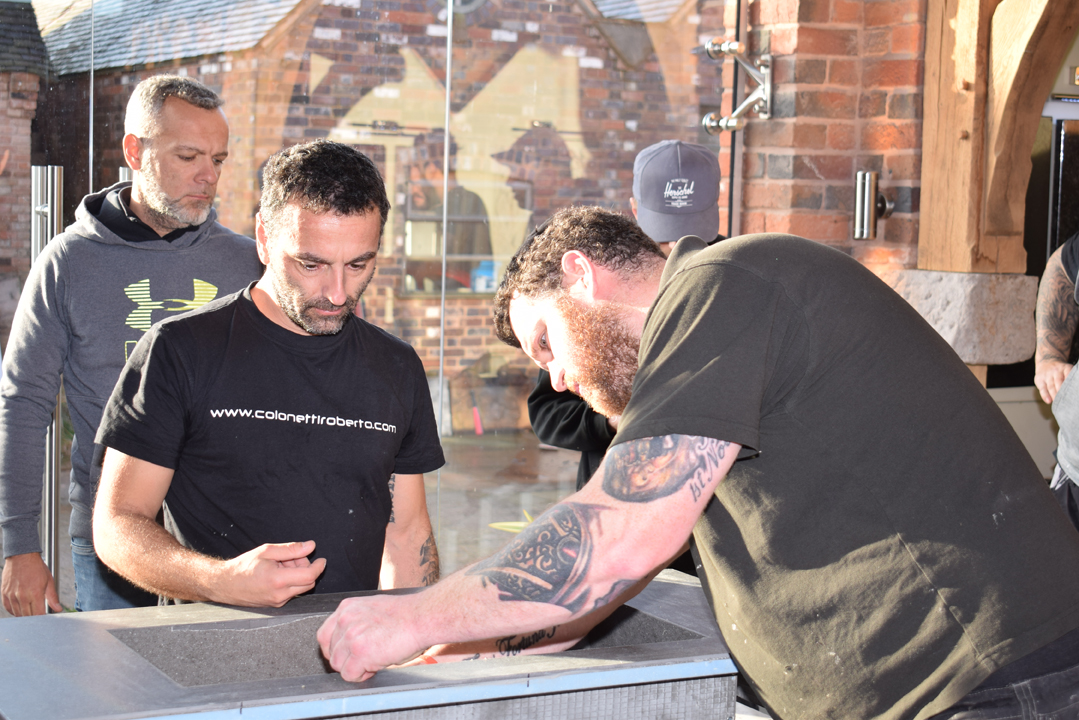 Roberto calls himself a porcelain artist and showed them how to make a sink out of porcelain. On the first day of the event they went to Steve Murphy's workshop factory to see how the material could be cut. Steve has two waterjet cutters, CNC saws and workcentres and a Comandulli edge polisher.

The material Roberto was using to make the sink was Atlas Concorde, which many believe is one of the least problematic porcelains to use, although Roberto said he does not believe it makes much difference. It usually comes down to which design the customer likes and the price – "everyone is looking for the price", says Roberto.

On the second day, the course moved into the unusual Planet Granite showroom (which was warmer) with its fabricated dinosaur fossils and pool table to finish the construction of the sink.

The basic shape of the sink was formed using Wedi board and the porcelain was used to clad it.

"What I do is not a bible, it's a system," says Roberto. "I'm not saying it's the only way to work, but it's working for us. When you know what you can do with porcelain it opens up new opportunities. All designers are talking about these days is porcelain."

Steve Murphy agrees and has found some novel ways of using it himself. 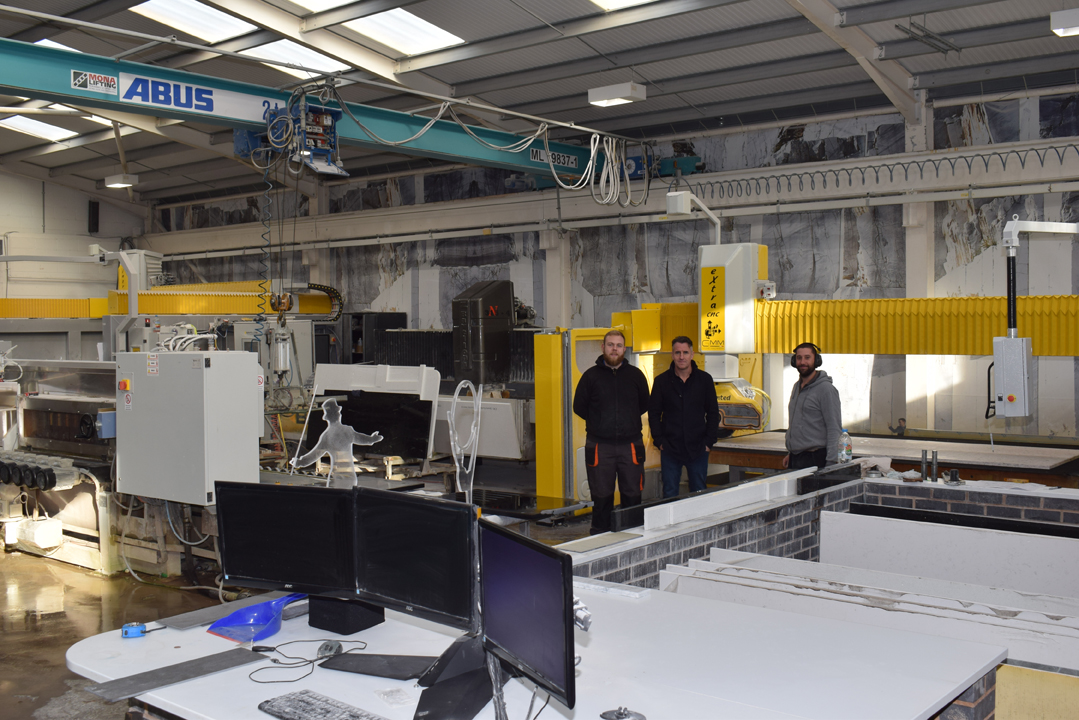 He uses a lot of Dekton and Neolith, but because the pattern on them is generally printed on, if you make a sunken drainer you lose it because you have removed the surface. Steve has got round that by using his waterjets to cut out the shape of the sunken area of the drainer. He then glues the piece back in a few millimetres below the worktop surface.

It is not only effective, it is also quick. It takes about 12 minutes to do – a fraction of the time it takes to cut a sunken drainer into a granite worktop using a CNC.

"The GMMs and the waterjets have brought us this level of sophistication. Before we had them we couldn't have done this." Steve has a GMM Intra and had the first Extra to be installed in the UK. His two waterjets are Technis from the Australian manufacturer taken over by GMM last year, although that was after Steve had bought the two he has.

Below. The two waterjets that Steve says have added a degree of sophistication to his business that would not have been possible without them and the GMMs. 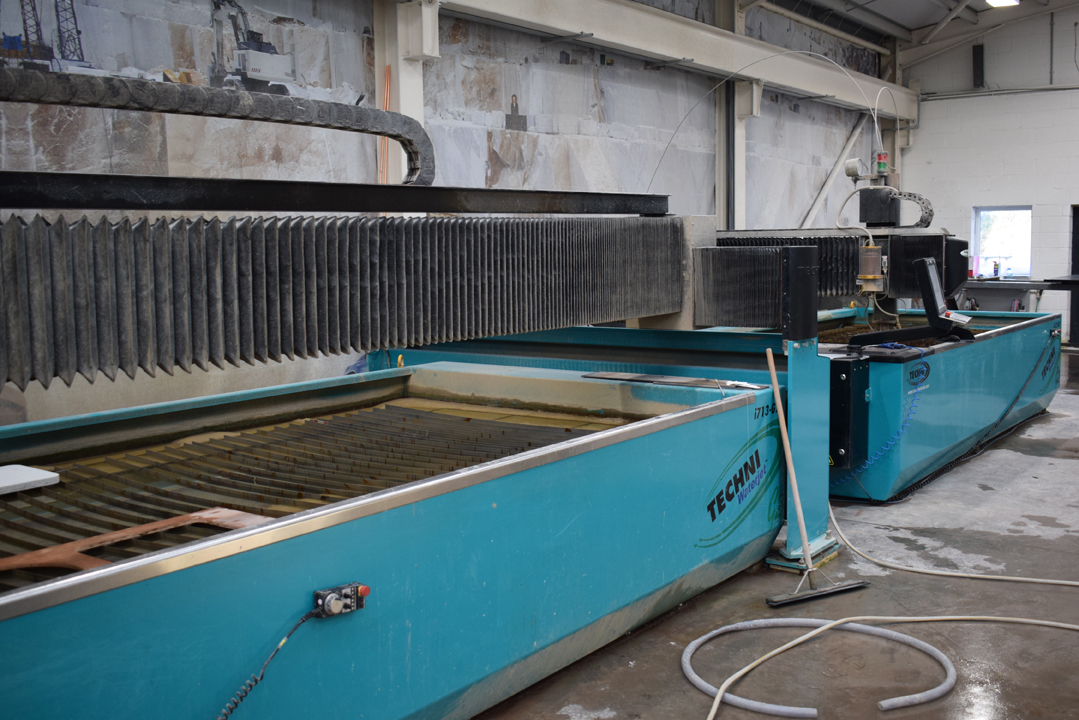