Legendary London Stone is back 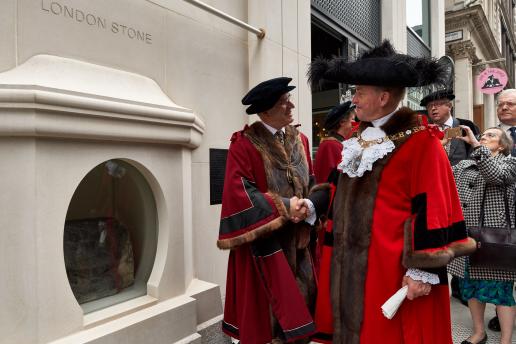 Andrew Bowles (left), The Master of the Masons' Livery Company, with the Lord Mayor of London, Alderman Charles Bowman, at the unveiling of London Stone on 4 October.

The legendary London Stone, said to have been brought to London by Brutus, the reputed founder of Britain, is back in Cannon Street.

The Lord Mayor of London, Alderman Charles Bowman, unveiled the reinstated London Stone at its original address this morning (4 October) in the company of The Master of the Worshipful Company of Masons, Andrew Bowles.

The unveiling marks the completion of a new commercial development from London & Oriental at 111 Cannon Street in London EC4. While the work progressed the London Stone was housed in the Museum of London.

London Stone has long intrigued Londoners and visitors to England's capital city. Legend says: “So long as the stone of Brutus is safe, so long shall London flourish.” It has survived The Great Fire of London and the Blitz and is referenced in Shakespeare’s Henry VI Part 2.

The stone was first mentioned in the 12th century and since then many tales in folklore and literature have added to its enigmatic reputation. It is thought to have stood in London since prehistoric times and was probably once part of a substantial Roman building on the site of what is now Cannon Street railway station. It was even supposedly visited by medieval kings and queens when they ceremonially took charge of London. In 1450, Jack Cade, leader of the rebellion against the corrupt government of Henry VI, struck it with his sword and claimed to be Lord of London.

The Worshipful Company of Masons, which has an historic association with the use of stone in the City of London, has long watched over London Stone – ever interested that it is appropriately displayed. The Stone has also featured in the history of other Livery Companies, notably the Spectacle Makers, whose Master was authorised by the Lord Mayor in 1672 to smash poor quality spectacles on it to uphold craft production standards.

The stone is now once again on display on Cannon Street, now behind glass in a new Portland limestone enclosure. It is illuminated and has a plaque next to it explaining its significance. It even has its own website (londonstone.org.uk).

Loris Tinacci, Partner at London & Oriental, says history is being preserved and London Stone will remain in its original home on Cannon Street.

Roy Stephenson, London’s Historic Environment Lead at the Museum of London, added: “The Museum of London has been proud to be able to display London Stone and introduce it to our visitors and countless Londoners who never knew it existed. We are honoured to have been able to highlight the legendary status of this seemingly mundane slab of limestone and be part of its illustrious history. We are pleased it is going back to its former home and hope its new display case will allow many more people to learn about its fascinating history.”