MGLW has everything the Italians can offer and it's in London 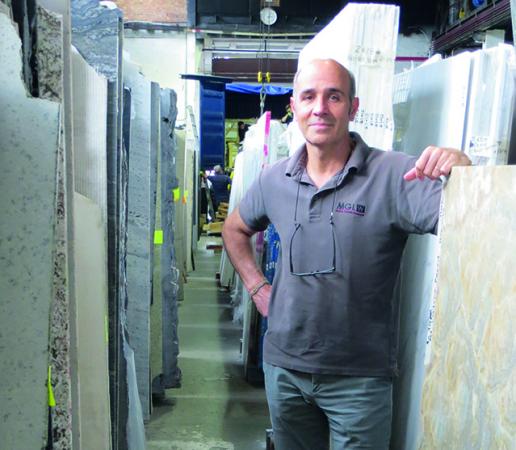 Rogerio Moutinho in the MGLW warehouse in London where a new inspirational showroom is being designed by two young Italian architects. A new website is also being designed incorporating customer relationship management (CRM) software.

More than anything else, MGLW aims to be the source of inspiration when it comes to choosing natural or engineered stone.

For more than 25 years MGLW has been supplying stone to the London market and in that time it has made a lot of friends among the companies that install the stone. It has supported and helped them through difficult times and always welcomed their customers, professional and domestic, to its no-nonsense premises in Linford Street, just south of the River Thames near to where Battersea Power Station is currently undergoing its transformation in one of the largest building projects in the English capital.

MGLW aims to make choosing beautiful, quality hard surfaces as easy as possible and offers unique and exotic materials from across the world to architects, designers, stonemasons, developers and building contractors as well as end users. Customers can take their time choosing exactly what they want, helped by MGLW’s specialists offering their professional advice. If the wholesaler does not have what a customer is looking for, it will often source it specially.

It is a service and an attitude that has made MGLW the first point of call for many of the stone fabricators and fixers in London and a go-to company for architects and developers looking for quality finishes.

But… times are changing. Changing times demand changes in the way we work, although until it is clear what is changing it is not easy to respond appropriately. The uncertainty about what life will be like post-Brexit is a problem, especially as Brexit stretches on and especially when a proportion of the products you sell come from Europe.

It makes stone wholesaler MGLW reticent about putting plans it has for meeting the changes into action. It is not alone. There is a lot of waiting and seeing going on right now.

One aspect of Brexit MGLW Director Rogerio Moutinho is hoping might help UK distributors is if it makes Italian suppliers less keen on supplying UK projects directly from Italy and cutting out the UK supply chain.

Some of MGLW’s marbles come from Italy, of course, although it is also buying stone from countries such as Brazil, Oman, Egypt, Lebanon, Turkey, Norway and anywhere else Rogerio and his older brother Joao, who established the business, find material they believe will be appreciated in the UK.

Rogerio maintains that a combination of UK stone processors, who make up 90% of MGLW’s customer base, and wholesalers like MGLW can supply projects in the UK competitively compared with the Italians.

“What we have to do is to somehow find a way to tackle the Italian competition. We have our connections around the world and can compete with the Italians directly – and we’re easier to deal with! If a customer wants to see the quarry, we can arrange that very easily. It’s how we support our fabricators, but we need to exploit those advantages better. It’s down to us, really, to sharpen up our act; to be flexible, cut margins a bit and give a very good service.”

One way he is already working on doing that is by updating the MGLW website, which he says has become his main shop window as a new tech-savvy generation starts to dominate. The website has become a major source of enquiries.

Rogerio is currently developing the new website's CRM (customer relationship management). “We have to get that right first,” says Rogerio.

It is about increasing the efficiency of stock management and keeping track of orders and deliveries, improving management resources and giving the customer a quicker, more transparent service.

“That’s a very, very big job for us – and very important. It will give us a lot of information about the client. It will tie it all up together, although we will still prioritise the masons - we want to win projects but we supply them through the masons.”

In spite of the importance of an online presence, Rogerio still encourages both industry and consumer customers to visit the company’s premises because he knows when people visit MGLW it is usually MGLW that supplies the stone, even though it is supplied via a fabricator.

To help encourage architects and clients to the MGLW premises, the company is currently creating a showroom where they will be able to spend as much time as they need in comfort planning and choosing the materials they want to use. Two young, Italian architects are designing it.

Rogerio: “It’s all about image, service, information and winning orders. We will be bringing more sales people into the business, although probably after October – this waiting game effects everyone. The objective is always to get more people visiting the warehouse. To do that we have to make that experience as pleasant as possible so they want to come back and will refer us to others.”

Rogerio likes to have slabs for them to see because MGLW has used its extensive contacts around the world to make a speciality of supplying more exotic, high quality materials that it is hard for others to source directly. He is glad, too, that marble continues to be popular because granite prices have been cut to the bone to try to compete with quartz.

The more figurative materials need to be seen as slabs to be appreciated. A 400mm square sample, or even a larger sample, cannot possibly do justice to a highly figured slab of marble or quartzite that varies across its whole surface.

Currently MGLW carries a lot of stock, which can make it difficult to appreciate individual slabs. The warehouse is basically organised for the convenience of the trade rather than clients, but the role of wholesalers is changing and they know they need to be stretching further along the project chain to reach the decision makers in order to support processors.

Wholesalers have become not just suppliers of slabs, but of projects for those slabs to be used on. And architects and clients often appreciate a more comfortable environment for their deliberations, so MGLW is considering a completely new approach, turning its Battersea premises into more of a display and sales environment and holding most of the stock in less expensive premises outside the M25.

It might already have happened if there had not been the uncertainty surrounding Brexit. As there is, MGLW is progressing carefully, for now contenting itself with the showroom in its Battersea premises, although it has also opened a warehouse on the European mainland to hold stock for the projects it supplies primarily for London architects working in Europe… just in case trade with the UK becomes subject to tariffs.

Inevitably these days, MGLW stocks quartz and sintered stone as well as natural stone. In fact, it was one of the first wholesalers to introduce sintered stone when it started selling Neolith from The Size. And it is still selling it, even though The Size has opened its own Neolith and Granith (a factory-sealed granite) warehouse in the UK in Harlow, Essex, and has its own showroom in London’s Business Design Centre in Islington. MGLW says its prices are the same as Neolith’s, so its customers still find it convenient to buy from MGLW.

For quartz, MGLW sells Compac and its own collection sourced from India and China. Rogerio says the market has encompassed quartz because it is easy and because it has been marketed strongly, which has expanded the demand for it. But, he says: “If you’re brave enough to accept natural stone you will get your own niche.” Even so, he says about 60% of MGLW’s sales are now of artificial stone – mostly quartz, but with ceramics holding out a lot of promise for the future, largely because they can be thinner and lighter weight.

Whatever the outcome of Brexit – and Rogerio thinks it will require the UK to re-think what it is good at – MGLW intends to remain in London. Rogerio says the English capital is “unbelievable” in its variety of attractions and that stone will continue to play an intrinsic role in the art of many of its buildings, from carvings, sculptures and masonry to the walls, floors and work surfaces of interiors.