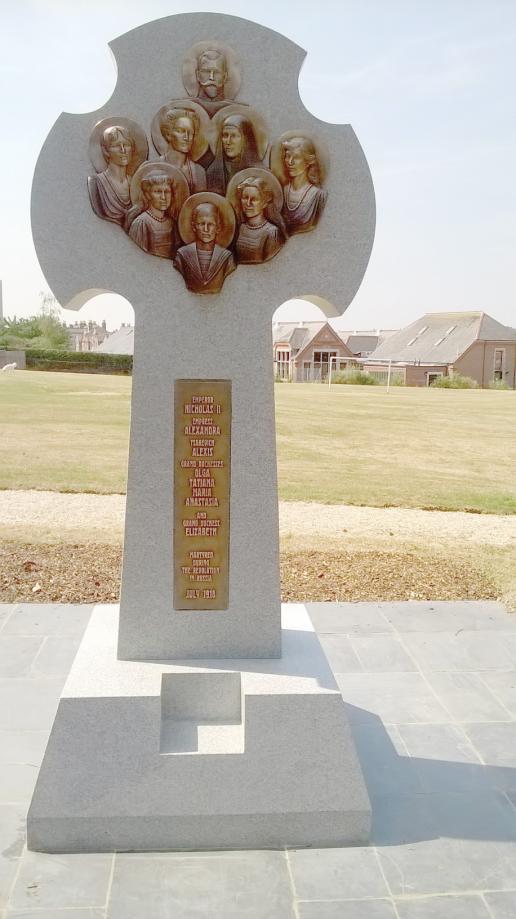 The new cross on the Isle of Wight that commemorates the killing of the Russian royal family 100 years ago.

Cowes in the Isle of Wight has a new, 3m high granite memorial with bronze decoration, supplied by R Pascoe Granite wholesalers in Cornwall for Wight Stonemasonry. It commemorates the Russian royal family, killed by Bolshevik revolutionaries 100 years ago.

The Cowes connection comes from the Romanov’s visits to the Isle of Wight for summer holidays. They went to the Isle of Wight because Queen Victoria, the grandmother of Alexandra, the Czar’s wife (canonised in 1981), spent holidays there at Osborne House (now a tourist attraction) to enjoy the Cowes Week yachting event. The Romanovs arrived on their Royal Yacht and would visit Osborne House, Barton Manor and St Mildred’s Church.

Czar Nicholas and his family and supporters were killed in Russia on the night of 16-17 July 1918. To mark the centenary, East Cowes resident Dave Hill brought together the Grand Duchess Elizabeth Romanov Society, East Cowes Council, East Cowes Heritage Centre, St Mildred’s Church and Barton Manor to erect and dedicate a memorial.

Dave Hill approached Wight Stonemasonry, architectural and monumental masons on the Isle of Wight, to make a granite cross with bronzes depicting and naming the members of the royal family who were killed.

The memorial was designed by renowned Russian artist Elena Bezborodova, who also unveiled it. It was donated to the town of Cowes by the Grand Duchess Elizabeth Romanov Society.

Wight Stonemasonry approached memorial wholesaler R Pascoe Granite about getting the 71/2 tonne cross with its 21/2 tonne plinth made.

The stone chosen for it is Indian Silver Granite. It is made from a single block that was shaped to the required design in India.

The celebrated choir from the Saint Elizabeth convent in Minsk sung at the dedication of the memorial and afterwards there was vespers at St Mildred’s Church.

David Hailstone at Wight Stonemasonry told NSS this was the biggest memorial the company has ever been asked to put up – although it was not their most onerous memorial as they are also working on Ryde war memorial. There it has been decided to re-cut all 4,000 names by hand after first re-dressing the Portland stone of the memorial, cutting 6-7mm off the face to create a flat surface for the re-worked inscription. “Most of the names were illegible anyway,” says David.