160 post-tensioned Massengis limestone columns carry the names of 22,442 people who died in the D-Day landings and subsequent battle of Normandy.

Architect Liam O’Connor and stonemasons
S McConnell & Sons, who worked together on the Armed Forces Memorial at the National Memorial Arboretum and the Bomber Command Memorial in Green Park, have now built a £30million memorial in Normandy, France, to commemorate those who died on D-Day and in the subsequent Battle of Normandy.

A memorial to commemorate those who died under British command on D-Day (6 June 1944) and the subsequent Battle of Normandy should open on a site overlooking one of the beaches where the troops landed in France next month (October), although the official opening will not take place until June next year.

The original intention was to have completed the building of the memorial by this month (September) but work came to a halt during the Covid-19 lockdown and will not now be completed until October.

The British Normandy Memorial bears the names of 22,442 British personnel and those serving under British command who died establishing a European mainland bridgehead that led to the end of World War II.

The memorial is the largest yet produced by the collaboration of architect Liam O’Connor and stonemason S McConnell & Sons in Northern Ireland – and their previous collaborations have not been modest. They are the Portland limestone Armed Forces Memorial at the National Memorial Arboretum in Alrewas, Staffordshire, and the Bomber Command Memorial in Green Park, London, also in Portland limestone.

Liam told NSS he enjoys working with McConnells because “they are such a great team with a great attitude”.

This time the stone used is the French limestone Massengis, supplied by Polycor, the Canadian company that in 2018 bought four French quarries previously owned by Rocamat.

About 3,500 tonnes of the stone were delivered to S McConnell’s works in Kilkeel, Co Down, to be worked into the various elements of the memorial, which includes 160 post-tensioned columns topped with oak beams.

Each column comprises seven stones, including the base and capital. The inscriptions were cut into the stones by McConnells using two Omag CNCs.

To put the number of inscriptions required into perspective, the Armed Forces Memorial at Alrewas, which carries the names of all the armed forces personal who have died on active service since the end of World War II, involved about 15,500 inscriptions.

The 22,442 inscriptions on the Normandy Memorial might still not be everyone who died in the battle. The Normandy Memorial Trust, which is behind the memorial, has tried to ensure the list is complete, but says if anyone discovers any omissions to contact it on [email protected].

The lettering used for the inscriptions was produced under the supervision of Richard Kindersley, who was also involved with Liam O’Connor and McConnells in the lettering for the Armed Forces Memorial and the Bomber Command Memorial.

The British sculptor David Williams-Ellis, whose father was a wartime lieutenant in the Royal Navy commanding a motor torpedo boat that supported the Normandy operation, was commissioned to create the ‘D-Day Sculpture’ that occupies a prominent position at the centre of the memorial.

The site selected for the memorial is a ﬁeld overlooking ‘Gold Beach’ in the town of Ver-sur-Mer, quite close to the spot where CSM Stan Hollis of the 6th Green Howards won the only D-Day Victoria Cross.

‘Gold Beach’ was the code name for one of the beaches where British and Canadian troops landed. Others were ‘Juno’ and ‘Sword’, while the Americans landed at ‘Utah Beach’. The Americans and Canadians already have memorials in Normandy.

D-Day veteran George Batts was an 18-year-old Royal Engineer (Sapper) when he landed on Gold Beach on the morning of D Day. Tasked with clearing mines and booby traps, he survived and eventually became the National Secretary of the Normandy Veterans Association, which has long held an ambition to see a defining British monument built on a single site in France to commemorate the men and women of the British Armed forces and civilian services who lost their lives in the Normandy Campaign.

The Normandy Memorial Trust harnessed George’s long-held passion and, with HRH The Prince of Wales (Prince Charles) as Royal Patron and Lord Ricketts as Chairman, along with many other venerable trustees, secured a commitment from the UK Government to construct the powerful and inspiring statement in Normandy to honour the fallen.

Architect Liam O’Connor says the site originally proposed for the memorial was 15 miles or so along the coast, nearer to Sword Beach. But it was too confined and the 60-acre location eventually chosen was more suitable because it is unsullied by any form of inappropriate development.

Having decided on the site, the Trust went about securing the land, a project that was made easier thanks to the help of the Mayor of Ver-sur-Mer who gathered the land owners together and impressed upon them the significance of the memorial and the benefits of it putting the town firmly on the tourist trail.

The world-class memorial that Liam O’Connor has conceived and S McConnell & Sons have helped build, along with the French main contractor on the project Eiffage (which, in a joint venture with Kier, is involved in the construction of the HS2 rail route), is an impressive tribute to the British sacrifice involved in liberating Europe from the brutal rule of Adolf Hitler’s Nazi fascists. 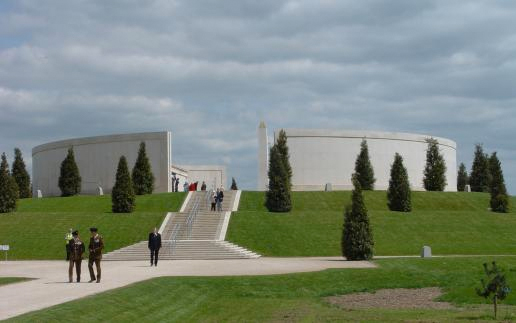 The circular Armed Forces Memorial at the National Memorial Arboretum, Alrewas, and the Bomber Command Memorial in Green Park, London, that were also designed by Liam O'Connor and built by S McConnell & Sons.