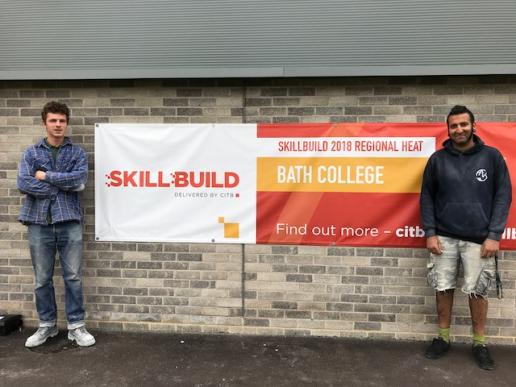 Everyone involved in last motnh's (May) SkillBuild competition in Bath, run by Stone Federation Great Britain in conjunction with CITB, had been sworn to secrecy about the result until the Scottish heat was completed. That has now been held and we can reveal that the winner in Bath was Bath College, taking both first and second place.

The competition was held at Bath College's new Somer Valley Campus, which the masonry workshops moved to last year.

Taking the top honour at the competition was Josh Underwood, with Hartaj Hunjan runner-up.

Josh and Hartaj worked hard to reach the top of the regional qualifiers and are now awaiting the final results, which will be released in July, to see if they have made the top eight competitors who will go on to the UK National Final at WorldSkills Live UK, as the SkillBuild exhibition has been renamed, in the NEC, Birmingham, in November.

SkillBuild is the biggest and longest running multi-trade construction skills competition in the UK. Stonemasonry is just one of the skills involved.

Hartaj was delighted with his second place in the competition: “I was quite surprised to finish where I did as I tried last year and didn’t quite make it. It’s great to see how much I’ve improved in a year.”

Hartaj has just finished the Stonemasonry course at Bath College and is an apprentice at A F Jones Stonemasons Ltd.

“I’m really enjoying my apprenticeship, which is enabling me to hone my skills. It’s a great way to learn and improve, as eventually I would like to go self-employed.”

Josh is also doing an apprenticeship at a Stonemasonry business. He is with Phidias Neo Classical in Bristol. After his apprenticeship he would also like to start a business.

Paul Maggs, Stonemasonry lecturer at Bath College was impressed with the performance of his students in the SkillBuild competition. “We are incredibly proud of Josh and Hartaj, who worked so hard for the competition. To have our only two competitors come first and second is a real testament to their talent.”