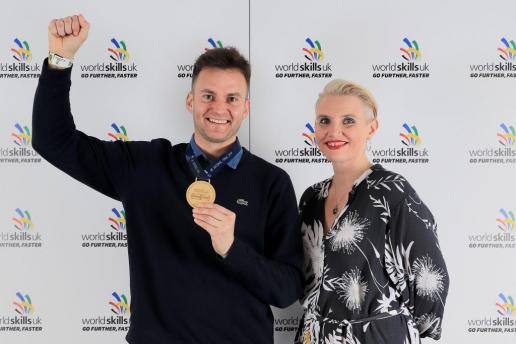 Callum Munro, a stonemasonry student at Edinburgh College, was one of three Scottish trainees to win a Gold Medal at the SkillBuild National Final held in conjunction with WorldSkills UK Live (previously called the Skills Show) at the NEC, Birmingham, 15–17 November.

Organised by the Construction Industry Training Board (CITB) with Stone Federation Great Britain organising the heats of the competition in England and Scotland to determine whio will compete in the final, SkillBuild is one of the longest running construction competitions in the UK and has been showcasing the talents of trainees for decades. It is part of the elimination process for deciding who will represent the UK at the two-yearly international WorldSkills event, the next of which takes place in Kazan, Russia, 22-27 August 2019.

Last year's WorldSkills competition was in Abu Dhabi. There were 1,249 competitors from 58 countries competing in 51 skills. Archie Stoke-Faiers, who trained at Weymouth, represented British stonemasonry and won a Silver Medal.

SkillBuild and WorldSkills involve a variety of challenges in various vocational skills, including plastering, stonemasonry, painting & decorating and bricklaying. The SkillBuild 2018 National Final saw more than 70 competitors from 15 regional qualifiers travel to Birmingham’s NEC Arena to battle it out for the honour of being judged the best in their chosen trade.

The other Scottish winners of Gold Medals were John McMenamin (for plastering) from City of Glasgow College and Aiden Dearie (painting & decorating) from City Building, Glasgow.

Sandy MacGillivray, CITB Scotland Regional Delivery Manager, said: “It's fantastic to see a group of talented people from Scotland taking home Gold at the 2018 SkillBuild final. The standard that’s been shown by the competitors over the weekend was hugely impressive. SkillBuild is one of the many ways we can demonstrate the immense talent coming into the construction industry and attract more young people into a rewarding career in our sector.”