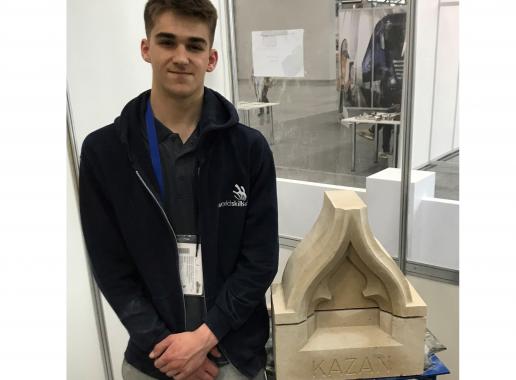 Ethan Conlon, who is representing UK stonemasonry at WorldSkills in Kazan, Russia, 22-27 August.

WorldSkills, sometimes known as the Skill Olympics, is an international competition for technical and vocational subject trainees held every two years in different countries. This year it goes to Russia. The UK has produced a fair number of Gold Medal winners in stonemasonry since the competition was launched in 1950.

The competition sits alongside WorldSkills’ mission to raise the profile and recognition of vocational skills to highlight the contribution such skills make to economic growth and personal success for those who choose this route.

Competitions in more than 50 skills take part, from stonemasons and bricklayers to beauty therapists and mechatronics.

Earning a place in the team is not easy. The journey involves lots hard work and dedication. Ethan’s journey began when he left Burford School in 2016 with a handfull of GCSEs. Not finding satisfaction in academic life, he looked around for something else and started an apprenticeship with APS Masonry in Oxford, where he still works.

Ethan, who works studied on day release at Bath College, where his lecturers were impressed with his ability and commitment. He was an easy choice to include in the Bath College team taking part in the competitions leading up to the WorldSkills final selection process.

Ethan, just 17 years old, competed against older trainees on his way to being selected. In the end, the hopefuls had been whittled down to three possible stonemasons, who then received 10 weeks of specialist training last year in preparation for a final five-day Team UK selection competition in March this year at York College.

Ethan’s outstanding work earned him his place in the team to represent his nation.

Ethan is now in the middle of his last stage of training with stonemasonry experts from the UK as well as travelling to competitions in Russia and Brazil to build up his experience before his final test in August.

With his dedication to the craft, this young man has shown the great talent that young people have in the UK when they find their right direction. There are, as Worldskills UK says, “many paths to success”.

Ethan is nearing the end of his journey. Our best wishes to this young stonemason, who has won his place among the world’s best – a modern day Christopher (Kit) Kempster, the Burford stonemason who worked with Sir Christopher Wren to build St Paul’s Cathedral in London.