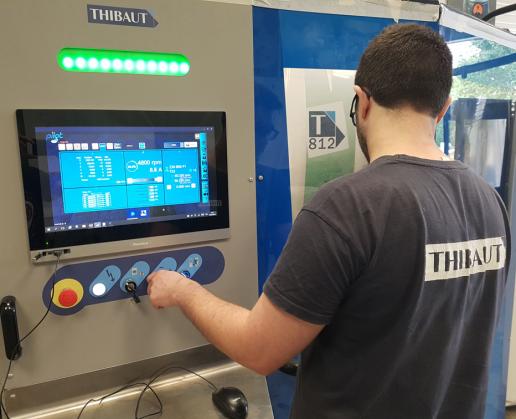 The latest machines from Thibaut have the standardised intuitive 'Pilot' interface, which the operator has to learn how to use just once and can then use the skill for all the machines.

That has reduced the number of components and enabled the company to source more of them from European suppliers at a better price and lower environmental cost.

It also gives Thibaut the ability to respond quickly to customer requirements – and customers usually want a quick response.

In view of the coronavirus that has made supplies from outside Europe less reliable, the move has come at the right time.

Thibaut makes, on average, more than 150 machines each year, 60% of which are exported across the five continents. Some come to the UK and Ireland through the manufacturer's agent in Britain, On Point Engineering in Grantham, Lincolnshire.

Jacques Thibaut, MD of the company that bears his family name, says: "We have been present in the United Kingdom for more than 40 years and have more than 500 machines sold in Great Britain. We also have a trusted agent, On Point Engineering, who allows us to stay close to our customers.

"Despite Brexit, customers rely on us just as we rely on them. So there is no question of turning our backs on our English-speaking neighbours.

In the new decade of the 2020s Thibaut offers its streamlined range of machines that ensure operator safety, optimize productivity and reduce environmental impact.

Thibaut has been making machines for stone processing for more than 60 years, making a whole range of machines from diamond wire saws for block cutting to five-axes CNC workcentres and even a robot arm.

From this range, it will retain two machines in particular that it wants to highlight and add two new machines that it introduces below. 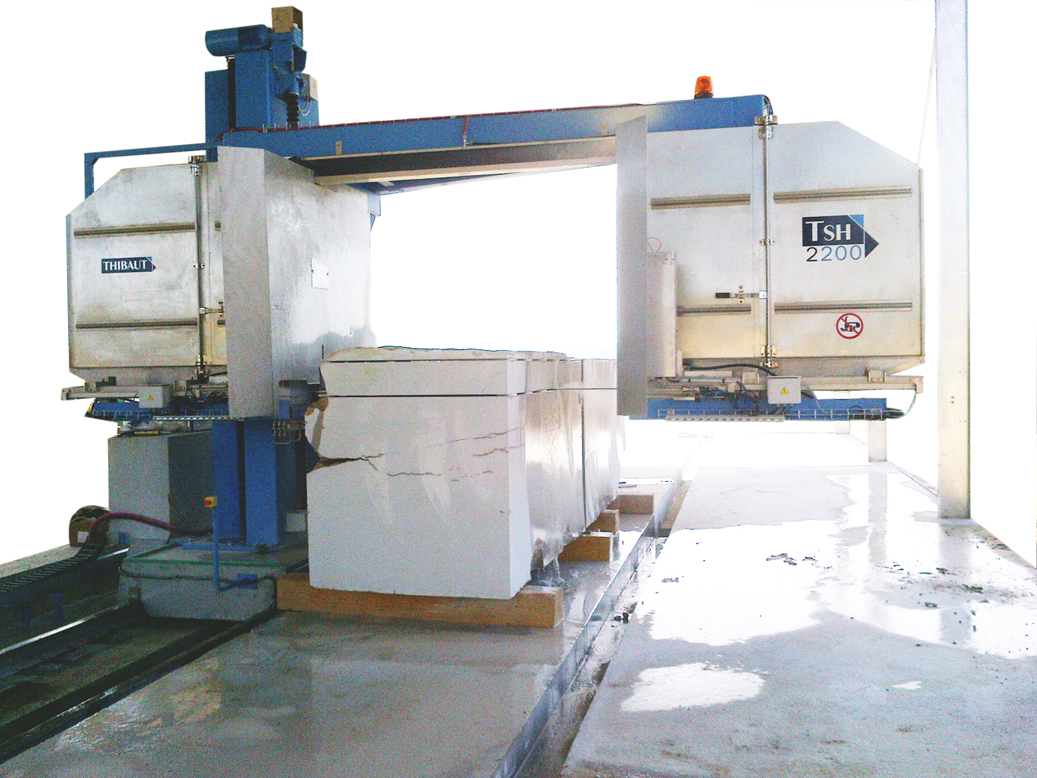 The first of the retained machines is the TSH2200 diamond wire saw that cuts horizontally.

This machine has been designed with the safety of the operator as a primary concern, which is why it cuts horizontally, using a patented automatic wedge insertion system. Thibaut says this is safer than vertical cutting because it requires less intervention by the operator and removes the need to turn the slabs through 90º for transport, as happens with vertical sawing. The length of the wire has also been reduced to limit the tension and reduce the risk of breakage.

The design of the wedges ensure a perfect fit to the cutting edges without the risk of splintering.

Apart from safety, the maximum possible amount of material is converted to usable finished slab, thanks to the wire passing through each cut line only once. A vertical wire goes back and forth, risking marking both slabs either side of the wire, which subsequently requires more preparation of the surface of the slab. 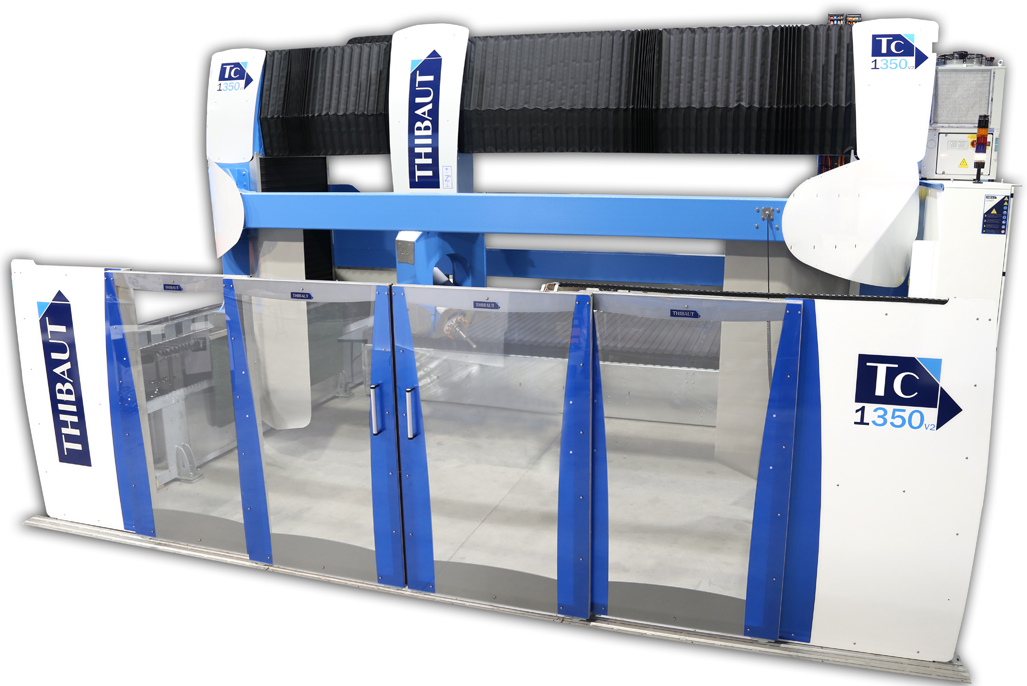 The other machine being retained that Thibaut wants to highlight is the TC1350 five-axes CNC cutting and profiling centre.

The TC1350 V2 allows the cuts to be made in all directions automatically without moving the slab – and the slabs can be up to 500mm thick. It can profile any shape up to 1500mm long.

The 360° rotation of the disc means there is no need for a rotary table, which makes the TC1350 V2 compact with fast positioning of the work.

Its variable speed (0-8,000rpm) and its automatic tool change allows it to be programmed to carry out any combination of drilling, profiling, trimming, sawing, smoothing and moulding operations without intervention.

Install the TC1350 V2 on a long track and it will work all night or even all weekend without supervision.

The innovative design of the mobile beam of this machine allows you to keep the vertical dimensions reduced without affecting the working capacity.

The TC1350 V2 will easily find its place in most existing workshops without the company having to invest in a new building to accommodate it.

The two new machines introduced to the streamlined Thibaut range again focus on safety, performance and adaptability. They are the TC625 five-axis sawing centre and the T812 V5 three and four axes machining centre.

The T812 V5 is an evolution of Version Four.

It has a new look and new features but Thibaut says the reliability on which the reputation of the T812 has always been built remains unchanged.

The fourth axis on this latest T812 is achieved with an angle drive gearbox.

The new look of the machine is a key element of this latest version of the T812. By rethinking the design, Thibaut has made it a point of honor to improve the safety of the operators while offering ergonomic use of the machine.

The new self-supporting doors with a large glass surface and the console integrated in the door have been designed with safety in mind. It is now possible to control the machine with the fingertips and still have a good view of the working area.

The operator can move safely in front of the machine thanks to the high polycarbonate doors that meet CE standards and ensure safety.

Above the stainless steel console, a luminous strip sends visual signals during the machining process to inform the user about progress.

The new 'Pilot' interface that is appearing on the latest Thibaut machines is easy to use, with the same intuitive skill set required for each machine, minimising the amount of training necessary to operate the different machines.

More from the stone machinery suppliers in the Annual Machinery Review in the September issue of Natural Stone Specialist magazine.