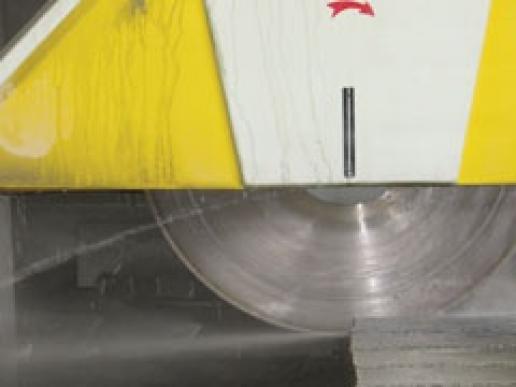 Rob Goode, owner of Goode Stone Supplies in Banbury, Oxfordshire, disagrees with those who say modern CNC technology and powerful software are deskilling the stonemason’s trade.

“It’s actually giving people the opportunity to have a trade in the stone business,” he says. “Masons need to embrace new skills that technology brings, enabling them to produce more accurate work much faster and remain competitive.”

He speaks from experience. Rob wanted a five axes GMM saw, but he wanted a Zeda head frame fitted to a Litox, making the machine unique. Since producing it, GMM has added the combination to its price list, but Rob’s is currently the only one of its kind up and running. And what is running it is Alphacam Advanced Stone Cad/Cam software.

Goode Stone Supplies already had a GMM Egil and Rob wanted to expand its capabilities as well. “We’ve switched that to Alphacam, too, as it gives us great accuracy on all jobs on both machines, including straightforward projects such as copings, string courses, capitals and columns.”

Goode Stone Supplies has nine employees working out of 1,500m2 offices and workshops on an acre of land recently purchased to guarantee the company’s long-term future at the site. Rob did not want to employ any more people and believes the Alphacam software takes the place of four people he would otherwise have needed to complete the same amount of work.

“With Alphacam we simply line up on one corner and press ‘go.’ We can then leave the machine running and it’ll finish the job in the one set-up.”

Since installing Alphacam Advanced Stone to drive the GMMs, word has spread that Goode Stone Supplies can take on more complex projects and lately Hamish Mackie, one of Britain’s leading wildlife sculptors, asked the company to create a life-and-a-quarter size horse’s head in Great Tew ironstone on its machines for him.

Having finished a commission to produce lifesize horses in bronze, Hamish sent scans of the bronzes to Rob to see if the heads could be produced in the distinctive ironstone.

Rob: “I can guarantee what comes off our machines is a 100% accurate representation of the 3D CAD design.”

Rob believes stone companies that fail to embrace technology will be unable to compete in future on three counts: accuracy, speed, and cost. “Instead of endangering the stonemason’s trade, I fully believe that technology is preserving it,” he says.

And it helps with health & safety by reducing masons’ exposure to the risk of vibration injuries and dust. “It makes us cleaner, faster and more accurate. It’s definitely the way forward for Goode Stone Supplies.”

Alphacam is a CAD/CAM solution provider that is part of the Vero Software Group.