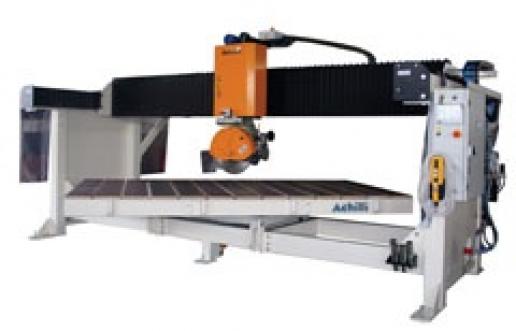 Marco Cavalleri, the Managing Director of Omag, left the Natural Stone Show in London in April a happy man. He had put a big Blade 5 CNC machine on the stand of his UK agent, D Zambelis. The machine is impressive and attracted attention. And by the time the show closed, Stella Zambelis had sold four Omag machines, admittedly not all Blade 5s but still worth a total of more than £500,000. And she had seven more leads to follow up.

As Stella says, you don’t sell Omag-size machines in a day and there were details and options to be sorted out after the exhibition, but two of the Omags have now been installed, one is due to be delivered in October and although decisions are still being made about the fourth, the purchase order is signed.

In Verona, Omag plans to show its big Tower 7, which it once demonstrated with an Area 5 working inside it. The two machines were operating together shaping 2m blocks of stone into a statue.

Stella says the Terzago and Achilli saws she sells are also continuing to be popular. “I have sold three Terzagos in the past week alone,” she says. “It’s the exchange rate – it’s like giving customers a discount. I went to three of our customers who are having machinery installed later in the year and suggested they pay now while the exchange rate is good. Then I did a forward currency contract. One of them has saved £2,000 on a Terzago. I was talking to someone an hour ago who’s buying an Achilli. He’s saving £600 on the exchange rate. ”

Stella says the Terzagos, in particular, sell themselves. “There’s nothing complicated about them. It’s easy to see what you get for your money and people trust the name. I have sold 10 so far this year. Whatever happens I sell one a month.”

From Achilli, there is the promise of an alternative version of the GLD TS monobloc bridge saw on its stand in Verona. It was introduced to the UK at the Natural Stone Show inâ€ˆLondon this year alongside a new mitre saw. Zambelis quoted for 10 of the mitre saws at the Stone Show and has so far supplied three of them.

The GLD TS has all the features Zambelis wanted to see on a saw for the UK market because the UKâ€ˆagent had a hand in writing the specification.

The saw has a price tag that starts at £35,000, a rotating, tilting table with positive locking at 0º, 45º and 90º in both directions, a 10hp (7.6kW) motor (with an upgrade to a 15hp [11kW] with 800-2500rpm variable speed an option), carries a 500mm disc and has motorized head travel. The head can be manually tilted through 90º. Linear guides with recirculating ball slides give smooth operation.

It has a ceramic-coated steel frame (or hot-dip galvanized if you prefer) with the option of hydraulic motorized pop-up rollers for easy slab loading and positioning. It has a cut of 3.5m on the X axis, 2.2m on the Y axis and 380mm on the Z axis.

The only drawback as far as some are concerned is that the turning table means you cannot have a water tank underneath for recycling the water, so the version being introduced in Verona has a fixed table and a water recycling tank.

The CNC software operated by colour touchscreen is simple and intuitive to use, although the saw can be set to various operating modes, including manual.

In ‘automatic’ mode you can make multiple cuts and program in step cutting on each size, with the head tilted if required. You can also calibrate.

In ‘profiling’ mode you can create and store profile shapes, while the optional ‘macro’ mode means you can create geometric shapes, including L-shaped kitchen tops and inclined drainers.

If you want to go even further, you can buy a licence for software that allows you to import and convert DXF drawing files (AutoCAD 2000) so they can be processed by the CNC control unit of the saw.

Another big Italian machine-maker Zambelis represents is Donatoni. Again, big, sophisticated machinery – which Stella Zambelis says she prefers because it is well made and does not cause problems after it is installed. A Donatoni tile line has gone to Stamford Stone and a cross cut saw to Lovell Stone on Purbeck.

CMG edge polishers complete the line-up of machinery from Zambelis.