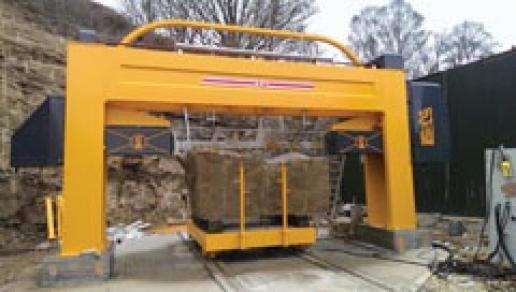 New Stone Age has sold a lot of machines this year, with several still to be installed yet. Among the companies it represents is the Italian BM, which makes some heavyweight saws. Lately, New Stone Age has sold two BM Super 800 Monoblades – one to M&M Yorkshire Stone in Bingley, West Yorkshire, and the other to North East Stone Products in Newcastle.

BM monoblades continue to be the preferred choice of New Stone Age customers sawing sandstone and limestone, despite growing competition from wiresaws. The monoblades offer accuracy and a good finish at a low cost per square meter.

James Turton, the Managing Director of New stone Age, says some companies that have bought wiresaws are reporting they are not getting the accuracy they had hoped for.

New Stone Age is also currently supplying various Bombieri & Venturi machines, including two TBV/1600M block cutters to a major expansion. One of the B&Vs is furnished with an AERO BV Automatic Unloader that removes each sawn-four-sided strip from the block and unloads it on to a conveyor or pallet.

There are also two IBV/600 M-1 automatic heading machines being supplied in Octoiber with laser measuring conveyors that allow the operator to define quickly where the heading machine will cut. The sawn strips then pass through a CALBV/600 calibrating and honing machine.

A third IBV/600 M-1 with the optional laser measuring conveyor has been sold to D Gillson & Sons to replace the company's existing heading machine for sawing to length paving cut on the company's Bombieri & Venturi block cutter.

And New Stone Age has even entered the export market with its Special Automatic Stone Dressing Machine for Pitching Walling Stone. One of the machines will be delivered to Spain and and an Automatic End Dresser & Dressing Machine is going to Australia.

New Stone Age has also been particularly successful in the water treatment and recycling sector with its OMEC systems. James says: "We are still receiving many requests for the OMEC water treatment systems and are looking to install a 1500 L/min system later this year, which includes an OMD30 cleaning silo & OMF814 filterpress." More about that in November issue of Natural Stone Specialist.

"We have several other projects in the pipeline that will hopefully be delivered by the end of 2015 or early 2106… watch this space."

All the manufacturers represented by New Stone Age will be attending the Marmomacc stone exhibition in Verona as usual and James says: "We look forward to seeing you there."