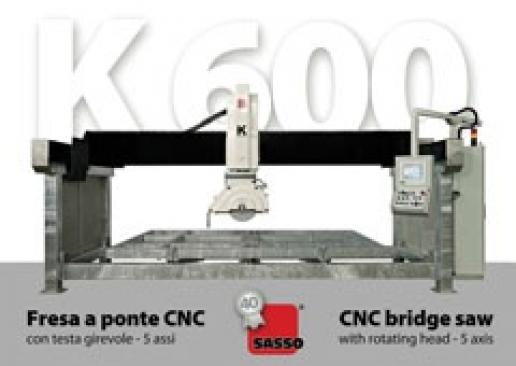 Pat Sharkey Engineering has just added Sassomeccanica to the range of machines it sells in the UK.

Italian company Sasso is best known in the UK and Ireland for its edge polishers, but as you probably saw at the Natural Stone Show in London earlier this year, where Sasso had a stand of its own, the edge polishers complement a range of saws.

Sassomeccanica is well established – it celebrated its 40th anniversary last year. Thomasso Caoselli formed the family company in 1974, and was joined later by his son Mario.

The smallest of the edge polishers is the Flying Flat. Its vertical drive belt means it takes up the minimum amount of factory floor space, although it still has the capability to produce quality work with minimum effort, thanks to the micro-oscillating polishing heads more commonly seen on larger machines. It has galvanised steelwork, aluminium components and stylish composite covers to combat corrosion.

If you are looking for more, there are the Flat 6-2, Flat 8-4 or Flat 10-4. The numbers refer to the number of main polishing heads followed by the number of multi-function heads.

Sasso has machines with choices for calibrating, water drip and even bush hammering. The TE Experience is the largest in the family.

The saws start with the Flying Cut with a 600mm blade through to the Extrema at 1200mm. These are uncomplicated automatic saws for everyday needs. The range goes up to the K-Series of CNCâ€ˆsaws working in 3, 4 & 5 axes.

Once again, corrosion is tackled by the use of hot galvanized steel, stainless steel and composite covers. The saws are available as mono-blocs or with separate gantry walls for multiple table options.

And there are some particularly attractive prices during the current launch period as well as a 24-month warranty(normally 12 months) on the first machines bought in order to give you an added incentive to take a look at the Sasso range.

Pat Sharkey Engineering had long held the ambition to expand its machinery offering in the UK from the German Spielvogels it has been selling for 26 years – and is still selling, especially the Spielvogel Pelican that Pat describes as “a stone mason’s dream machine”.

In a dust-suppressing wet process it is used to saw, mill, drill and polish. It is worth watching the video of it going through its paces on the Pat Sharkey website. It can make a lot of pneumatic tool work obsolete, reducing masons’ exposure to injury-inducing vibration.

There are Pelicans in use around the UK – Hutton Stone, Dunhouse, Border Stone and (soon) at Weldon Stone.

Pat Sharkey and his son Neil have a well-established reputation as engineers installing and maintaining machinery and were often asked for their advice by customers about what machines to buy. So they decided to take on some more agencies themselves, with Sasso being just the latest of them.

They now also sell Mondial Mec bench and multi-axes saws, Canigo wire saws, Dazzini quarry saws, Gilbert saws from France and a new machine from Lovato Evo of Italy that cuts irregular pieces of stone into flats and corners in a continuous process for walling and cladding. They also have water treatment and dust suppression systems.

As they said when they first started taking on more agencies, investment decisions by stone extractors and processors had been put on hold for so long there was a pent up demand. They were a bit ahead of the curve but now the floodgates have opened on that pent-up demand Pat Sharkey Engineering is in a strong position to benefit from it.

And, like other companies that exhibited at the Natural Stone Show in London in April, Pat says the exhibition provided a tremendous boost to business this year. “I was so busy at the Stone Show I didn’t have a second to look around.”

He says he took orders at the Show and has been taking orders resulting from it ever since. The only machine he is still waiting for the first order for is the Lovato Evo, but as it is a new concept he is not entirely surprised. He expects someone with the vision to exploit its possibilities to purchase one eventually.

Pat and Neil will be at Marmomacc in Verona this year along with most of the companies they represent in the UK – only the German Spielvogel and French Gilbert brands will not be there.