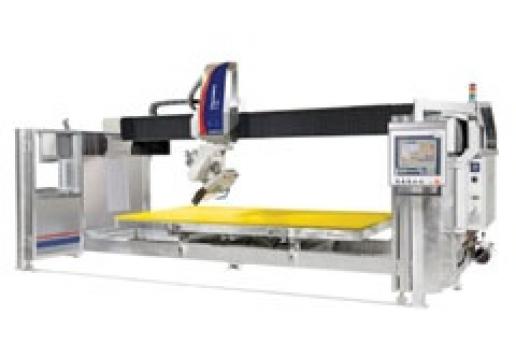 There is a new version of the three axes Emmedue Fusion that Andy Bell, who runs Stone Equipment International, Emmedue’s UKâ€ˆagent, attributes to his customer Richard Beales of Bespoke Stone inâ€ˆIpswich.

Bespoke Stone, which employs six people including Richard Beales, already had a four axes Breton NC260 CNC workcentre, a MarmoMeccanica edge polisher and a Weha saw. Richard wanted the simple three axes Emmedue saw to go along with the other equipment but asked why it could not also be used for drilling tap holes or milling upstands without the workpiece having to be moved to the CNC workcentre with all the setting up and positioning of suction cups that required.

“I spoke to Andy about it and a light bulb came on in his head. It was bang on,” Richard told NSS.

Andy asked the Italian manufacturer if it could put a four-axes style head that could flip through 90º on to the Fusion to allow it to perform drilling, milling and polishing functions as well as sawing. And Emmedue obliged.

Being a saw, there are no suction cups to position, which makes the production of a straightforward worktop simple: the slab is sawn, the head of the machine turned, the tap holes drilled and drainer grooves milled without having to move the workpiece.

The new version Fusion is due to be delivered to Bespoke Stone this month (September). It will then go on general release.

Andy Bell says: “There are a lot of people buying four and five axes machines just for doing work like this. Why spend up to £60,000 when you could have this version of the Fusion for just over £40,000?”

Emmedue see this as an adaptation particularly for the UKâ€ˆmarket and it will not be appearing at the stone show in Verona. There, Emmedue will make its debut to the CNC workcentre sector. Details are being kept under wraps until the show but this magazine hopes to bring you more details afterwards.

But modifying the Fusion for the UK was something Emmedue was happy to do. Andy Bell: “I’m always interested in listening to a customer who is on a certain budget and to find a way of doing things within that budget. In this case Emmedue has gone away and done what Richard wanted at a sensible price.”

As well as Emmedue, Stone Equipment International represents MarmoMeccanica edge polishers in the UK and, says Andy: “This is already the best year for sales of MarmoMeccanicas I’ve had since I took over the agency in 2009 – it had beaten my previous best year by the end of July.”

He attributes that not only to MarmoMeccanica being the brand that a lot of masons want but also to ‘no brainer’ part exchange prices he is offering.

When Stone Equipment International sells a MarmoMeccanica edge polisher it gives the customer a buy-back price for two and three years later as long as the machine has been looked after. It means someone with a two-year-old edge polisher now can part-exchange it for a new one and will only have to pay about £8,000 for a new one once the tax relief from the Annual Investment Allowance is taken into consideration.

Stone Equipment International has a thriving used machinery business, selling the machines all over the world through its newly redeveloped website. “There are still a lot of people who can’t afford new machines,” says Andy. “We’re still on top of the game in used machinery sales.”