Pencil round edge polisher from Marmo Meccanica is an instant hit 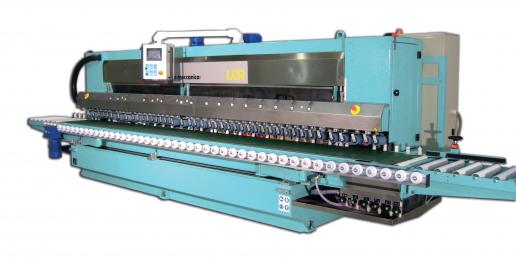 The new Marmo Meccanica LCR that can produce pencil rounds quickly and at a reasonable price was just what some companies in the UK were waiting for.

The new Marmo Meccanica LCR edge polisher has proved an instant hit for Stone Equipment International, which represents the Italian manufacturer in the UK. Within two months, three of the machines that produce pencil rounds have been sold.

Cardiff Marble and Stone Connection in Leeds went for the 7233 – that is: seven polishing heads, two bevel heads, and three-plus-three (top and bottom) cantilevered oscillating cams for producing the pencil rounds. The third company does not want competitors to know it has the machine.

Kevin Roche at Cardiff Marble explains what attracted him to the new machine, which is the seventh Marmo Meccanica he has had and which he part exchanged for an earlier version.

He has always had a policy of replacing machinery well before it is worn out and says Stone Equipment International offers exceptionally good part exchange terms.

Kevin says most worktops these days have flat edges with bevels. But because bevels chip, Cardiff Marble always finished them by hand. An edge polisher that could produce that pencil round without having to move up several price brackets was just what he was looking for.

When he saw the new LCR previewed at Marmo+Mac in Verona last year he was delighted. “I said to Andy” – Andy Bell owns Stone Equipment International – “if they can get this right they are going to be way ahead of the game because no-one else does a machine that will do pencil rounds. It’s going to reduce the time it takes us at present by 80%.”

Earlier this year Kevin went over to Italy to see a more developed version of the LCR. His only concern was that not enough water was being delivered to the polishing heads, which could be a problem with quartz. He mentioned this to Stefano Amagliani, who owns Marmo Meccanica and who understood.

“He listened to what I said and a few weeks later they had done it,” says Kevin. “Stephano is a great guy – he’s just full of knowledge on engineering.”

The water feed was elongated to solve the issue Kevin had identified. Cardiff Marble has also had a further adaptation of its machine with a separate water feed for the flat polishing heads and the counterbalanced cams that produce the pencil rounds.

Kevin argued that the oscillating heads and the fixed heads were really two separate entities. If something went wrong with the oscillating heads, he wanted to be able to isolate them so he could continue to use the edge polisher for flat edges rather than have the whole machine out of commission.

Not that he expects too much trouble from the oscillating heads. “You put your hand on the casing and its like a decent car – it’s so well made there’s no vibration.”

Cardiff Marble has a fully digitised workshop, including laser templating and CNC saws and workcentres. “We haven't got a waterjet (yet) but we have everything else and the LCR fits in just fine.”

Clive Ingledew, the Managing Director of Stone Connection in Twickenham, explains why he choose the LCR.

“Our existing Comandulli edge polisher, which had served us extremely well, was approaching nearly 15 years old and we decided that we needed to upgrade to a more modern machine and take advantage of the latest advances in technology.

“We wanted an edge polisher that produced a good finish on both quartz and granite and produced material that required little attention thereafter. We were also keen to have the option of producing pencil rounds in the same process. More complex edge details can be produced on one of our Breton CNC machines if necessary.”

Stone Connection was initially keen to stay with its Comandulli / Breton mix, but it looked at what else was on the market and felt the Marmo Meccanica LCR 7233 best suited its particular needs.

“In order to cement our decision Andy Bell kindly invited us to visit the factory in Ancona and once we had seen the manufacturing plant and had several questions answered we were convinced this was the machine for us.

“One important factor was Andy’s commitment regarding the speed of engineer response in the unlikely event of a breakdown, as any downtime can be very expensive to a business like ours.

“The new edge polisher will mean that we can easily pencil round all edges, avoiding any potential damage that can sometimes occur on the more traditional chamfered edge.

“The LCR 7233 is due to be installed in early July and we are all eagerly awaiting its arrival and it becoming part of the latest investment in our modern factory.”