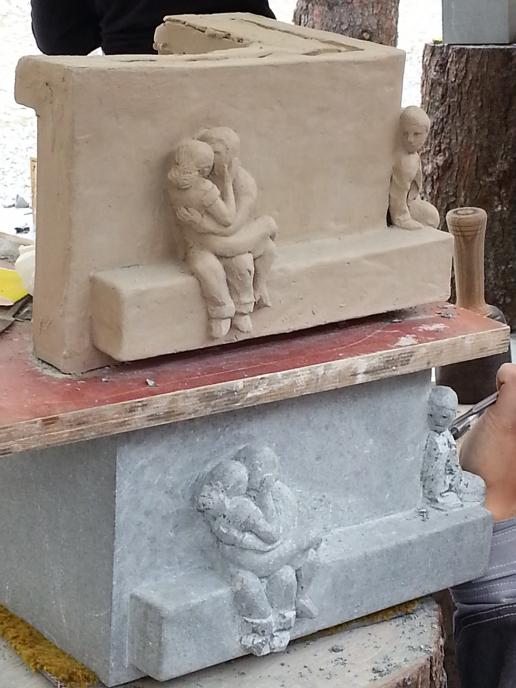 Henrik Størksen from Norway produced this carving from the clay model on top of it that he also fashioned. It will go into a bench in the new Torvet Square due to open in Trondheim next year. Although Henrik is an apprentice, his carving was judged to be the best work overall in the European Stone Festival this year.

More than 100 stonemasons and apprentices, including a good showing from the UK, had fun interpreting the theme of 'games' in soapstone at the European Stone Festival this month (21-23 June).

The Festival was back in Trondheim in Norway this year, in the courtyard of the Bishop's Palace, where it was previously held in 2012.

This was the 20th anniversary of the Festival as well as the 150th anniversray of the Restoration Workshop of Nidaros Cathedral (Nidaros Domkirkes Restaureringsarbeider), which hosted the event.

As well as the European Stone Festival, Trondheim invited the masons to produce carvings to go into benches in the new Torvet Square being created in the city that is due to be opened next year. The masons chose one or other of the projects.

There were no first place winners from the UK in the European Stone Festival this year, after several years of having taken major honours. The stand out work this time was by apprentice Henrik Størksen from Norway, who was judged to be best overall and had his bench carving chosen for inclusion in the benches in the square. But all the carvers, from wherever they came, acquitted themselves well during the weekend and a British competitior, Samuel Matthews, was runner-up in the 'Games' Carvings in the senoir class, while British apprentices took second and third places in the apprentices category.

The resuts of the 'Games' theme carvings were:

The carvings chosen to be included on the beches were from:

There will be more news and pictures from the European Stone Festival in the next issue of Natural Stone Specialist magazine. Order your copy here.