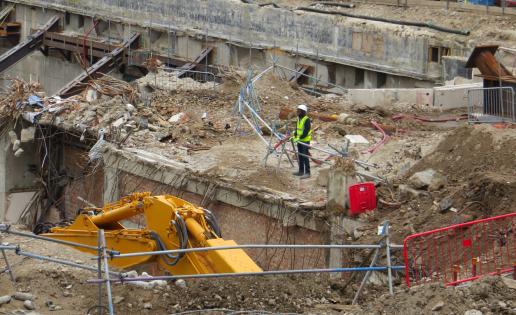 Modern slaves in the construction industry can be invisible in plain view. A good day for them is to be paid any wage at all, avoid violence and not be badly injured in a workplace accident, says Zak Garner-Purkis, Head of Content at Construction News.

Modern slavery in the UK construction industry is a reality. This is a comment from Zak Garner-Purkis, Head of Content at Construction News:

"Why should we speak to you? We’ve not eaten in three days,” a worker shouts in Romanian.

His cry prompts a group to round on me and stare.

They have a point: why should they talk to a journalist; how will it improve their situation?

Working on CN’s investigation into construction’s black market, I was consistently forced to justify why my presence would be anything other than harmful.

I met numerous men waiting for work at pick-up points in builder’s warehouses and DIY stores around London.

The reason they challenged me was simple: talking to a journalist was seen as a waste of time.

I met one man whose life was in danger from criminals who he said had kidnapped his wife’s friend and forced her into prostitution. He had tried to rescue her and been beaten.

Other workers told me how some weeks the only food they would have was soup from a homeless shelter, as they lived off £1-£2 a day.

The grim reality was that for them, a good day was to be paid any wage at all, to avoid violence and not be badly injured in a workplace accident.

It’s a life of dangerous uncertainty that most of us in the UK don’t have the first idea about.

But the other tragedy I witnessed, aside from these people being exploited, was the sheer waste of potential.

The construction industry is a sector in the midst of a skills crisis. The failure to convince young British workers to join this sector pushes labour prices higher every day.

Yet here are all these workers that harbour no such reservations; they simply want to work in safe, legal conditions.

Of course, difficult situations and economic disparities in their home countries compared with here are driving factors behind their desire to work in UK construction.

But does that make them any less valuable?

Many of the pick-up locations I visited for this investigation were places where Irish migrant workers had waited for work in the 70s and 80s.

While the situation for Irish workers has improved significantly, the legacy of those that sought work to provide for their families decades ago remains.

How many of the most celebrated names in this business are of Irish origin, and how many companies have been forged from that same upwardly mobile ambition?

I challenge you to create the platform to help these Romanian workers follow that same path.

Scrutinise the way in which you source your labour and see how you can help these workers help the industry.

Greater vigilance over how workers on your site are supplied will also ensure you are not lining the pockets of organised crime and people traffickers.

An executive in a different industry once told me one of his mottos: “doing right and doing well can be the same thing”.

We can prove that motto right.