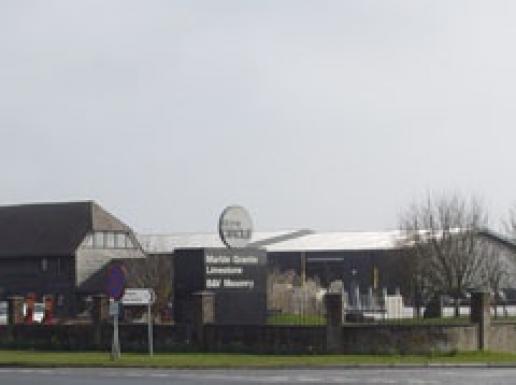 The new extension behind the existing premises of stoneCIRCLE.

Changes to the planning codes have at last brought stoneCIRCLE the expansion to its production capability it has been seeking for more than a decade. Now it can satisfy even more of the market.

When the government decided to cut planning guidance to local authorities from 3,000 pages to 50 in 2012, stoneCIRCLE was suddenly given an opportunity to carry out the expansion to its business in Basingstoke it had been trying to obtain for a decade.

Steve Vanhinsbergh and his brother Jeff had bought a field behind their premises in 2004 in order to expand, but permission to build a major extension to their factory there had always been denied.

What changed in 2012 in particular was paragraph 28 of the new guidance. It says that in order to promote a strong rural economy, authorities should “support the sustainable growth and expansion of all types of business and enterprise in rural areas, both through conversion of existing buildings and well designed new buildings”.

There were some physical issues to overcome – notably the removal of 70,000tonnes of chalk in order to bring the height of the field down 4m to the same level as the rest of the stoneCIRCLE site.

But Steve had spent 10 years sorting out these matters in his mind and arranged to supply the chalk to local farmers.

The plans he submitted for the new building were basically for a 2,050m2 rectangle. The planners did not like that. They wanted the expanse of roof to be broken up by different levels. “They practically designed it,” says Steve, but he went along with all they wanted in order to obtain the planning permission he required. And he is glad now for their input. “Otherwise, in a couple of years, I would have wished I had done it better,” he says.

The building he has now was built to BREEAM standards of insulation and energy efficiency. The planners even wanted a vacuum test carried out on the factory to ensure it was airtight, but in the end were satisfied for the test to be carried out on the offices only, given the huge volume of air in the factory.

As well as the building itself, the yard has been extended by 3,000m2 to allow for extra stock holding and easier handling.

The expansive roofs are used for rainwater collection into a 72,000litre tank and carry 300m2 of solar panels to generate electricity and add to the low energy requirement of the building. Not that the solar panels can produce enough electricity to run the four new GMM Brios, a waterjet cutter, the two Brembanas and Omag CNC workcentres and all the other equipment housed in the factory on their own. A new substation had to be installed to feed three-phase power into the factory. It has two sets of meters to record both how much energy it is using and how much it is feeding into the grid.

Steve believes the solar panels will have paid for themselves in five or six years and should continue to reduce his energy bills for the next 20 years while he receives the feed-in tariff. However, he says the panels were essentially about getting planning permission.

Steve: “I have spent hours and hours and hours on planning websites looking for advice – I did all my own research. I wrote to my MP and even the Prime Minister. I never gave up because we needed the extra space. I couldn’t employ any more people because there was no room for them – we were already running two shifts. We were really stuck for space.”

The company is in the enviable position of not having suffered a loss of earnings in the recession, although the work mixture has changed a bit. A quarter of stoneCIRCLE’s income comes through its own showrooms in Basingstoke and Newbury and the rest is evenly distributed among interior design studios, developers and work for specialist stone contractors. But its biggest client accounts for only 5% of its turnover and “that’s a great position to be in”, says Steve.

Before the economic crash, more work came from the worktop market, as it did for a lot of companies. But, says Steve: “We don’t need to be a worktop manufacturer – we’re a high technology masonry company. We’re trying to give UK architects and stone designers an alternative to going to Italy. We’re in the UK, we understand the way the UK construction industry works and we’re only 45minutes outside London.”

And stoneCIRCLE can do what companies in Italy can do, especially now it has the space and the machinery. Lately it has even been supplying 11mm stone, mostly onyx, on honeycomb backing for bar tops in A380 aircraft (the Airbus). From that has developed work on boats. “They weren’t getting great service out of Italy so they took the risk out of the operation by coming to us.”

And when architects and designers go abroad, they sometimes take stoneCIRCLE with them, so the company’s work can be seen in various parts of Europe, America, Russia… and now it is supplying curved and twisted string courses for a project in Shanghai that the locals couldn’t manage.

Steve and Jeff are proud of their company’s record, which they have worked hard to develop, seldom taking time off. “I don’t run a business for the perks,” says Steve from his office in Basingstoke. “I spend all my time here.”

But he has celebrated his 50th birthday this year and has started succession planning for 10 or 15 years’ time. The company employs 50 people, 12 of them in administration and management and the rest in the factory or templating and installing. He has started handing over more responsibility to his line managers.

“I have created team leaders for the sawing team, the CNC team and the polishing team. I talk to them at twice daily meetings and it’s their responsibility to make sure the work is done and schedules met. They are responding well to it and productivity has increased. It shows we recognise and value their experience and it creates a structure that gives others something to aspire to.

“We have seen the markets and the industry change so much, but I think it’s been for the better. Technology has given us faster, more accurate production, that allows us to offer more options, although the people are important for adding the finesse.”

The aim is to keep manufacturing in the UK so stoneCIRCLE can employ apprentices and pass on the skills. “I think there’s a reluctance of youngsters to come into the industry because of the way it’s perceived, but its hi-tec engineering these days. No-one entering this industry need ever be out of work.”