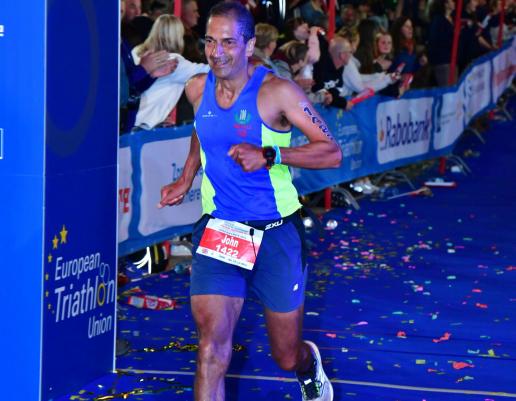 John Krause at the finishing line of the Challenge Almere-Amsterdam Triathlon, the third triathlon he has successfully completed.

London stone and terrazzo company Diespeker's very own marathon man, MD John Krause, has been at it again. This time he took part in the Challenge Almere-Amsterdam Triathlon, said to be Europe’s oldest long distance triathlon.

The Almere course is 25km from Amsterdam. It is 4.5m below sea level, at the bottom of what was once the Zuiderzee (the South Sea). The area is characterized by dykes, windmills and endless, straight polder roads with no shelter from the relentless wind.

John completed the Ironman-distance triathlon - his third so far.

He has represented Britain four times in his age group in Ironman, half-Ironman and duathlon events.

John started running marathons before he reached the age of 50 but has improved with experience. He still refers proudly to his fastest marathon run (number 115) in London two years’ ago, when he achieved an impressive time of just 3.08 hours. John says this was the most special run for him, not just because of the time, but because the marathon was in his home town.