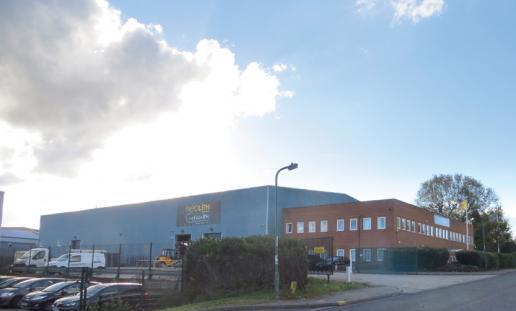 The Size spent last year preparing and filling its own 3,000m2 Neolith and Granith warehouse in Harlow, Essex. At the end of the year it also opened a showroom in London. Now it’s ready to rock.

This year marks the 10th anniversary of Neolith sintered stone – and the investments made by TheSize, which makes the material, in 2018 have positioned it for significant growth this year.

Part of that growth plan is a stand at the Hard Surfaces exhibition co-locating in ExCel London with the Natural Stone Show from 30 April to 2 May.

During the Show, Andreas Manero from TheSize Surfaces will also be presenting a case study under the title of ‘Enigma Variations’ during the Show’s ‘Marrying Tradition to Technology’ seminar. 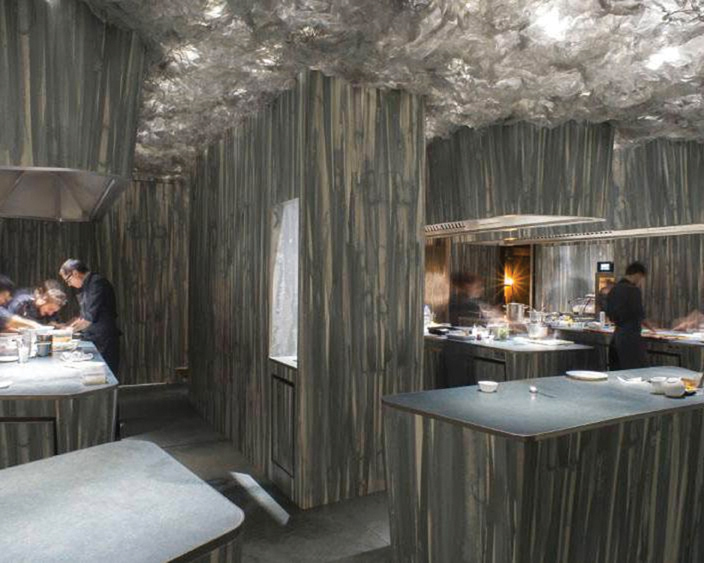 He will explain how Neolith extra large slabs have been used to create extraordinary interiors in The Enigma restaurant in Barcelona, the latest gastronomic expression of one of the world’s top chefs, Albert Adrià. Combining a kitchen, cellar, and cocktail bar, Enigma is a 700m2 labyrinth created by RCR architectural studio and designed to surround the diner in an atmosphere of mystery.

Exhibiting at Hard Surfaces comes a year after TheSize took direct control of the development of its business in the UK by opening a Neolith and Granith warehouse in Harlow, Essex. 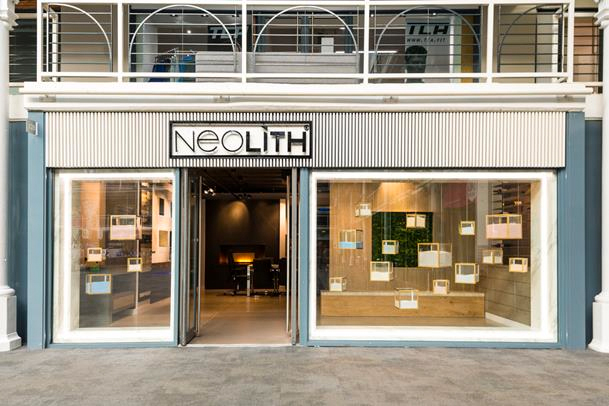 The company said then it planned to open a London showroom, which it has now done by taking over the unit in the Business Design Centre in Islington previously run by QF Distribution, which, until last year, represented Neolith in the UK. It has refurbished the unit and rebranded it solely with the name of Neolith.

Setting up in the UK was a significant move, but it was only one part of a major development internationally by the brand last year. The London showroom was one of 10 opened around the world. The others are in Madrid and Barcelona in Spain; Tokyo, Japan; Ramallah, Palestine; Singapore; and Manhattan, Phoenix, Dallas and Salt Lake City in the United States. Four more are opening this year, in Milan, Rome, Amsterdam and Düsseldorf.

At its factory in Spain, Neolith opened a fourth production line to satisfy the expected increase in demand. 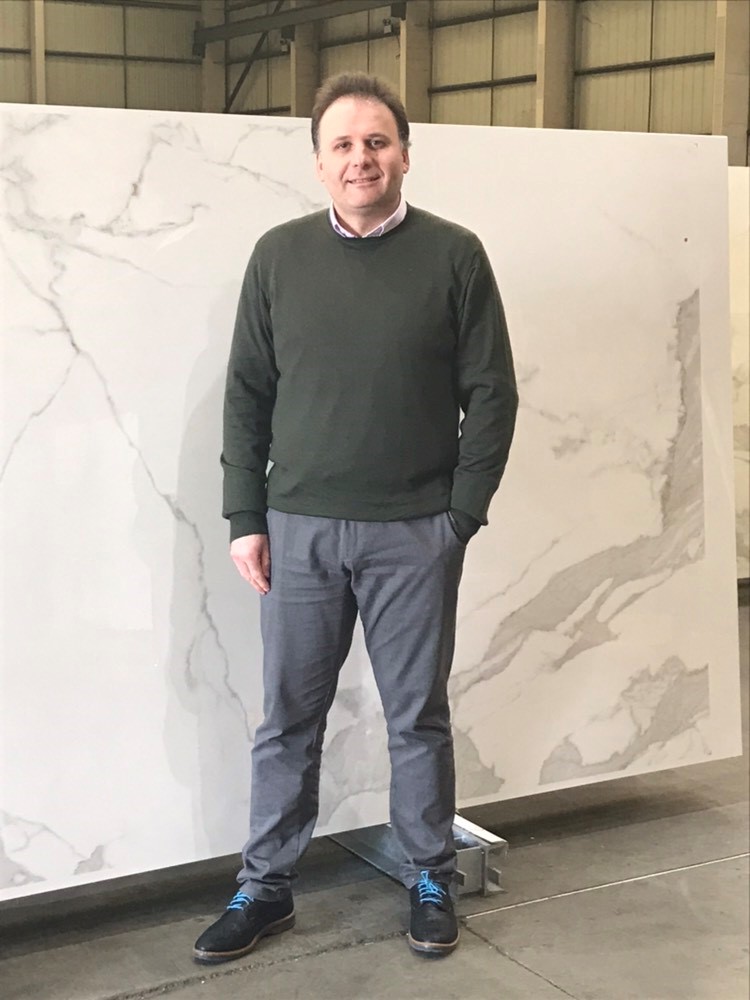 Francisco Sanchez was appointed this year to head Neolith in the UK.

In the UK, Francisco Sanchez, formerly the UK General Manager of stone wholesaler Ingemar – is now in charge with 10 people working alongside him. Jesús Esteve, from the family in Spain that owns TheSize, has moved to London to oversee the UK business as its Executive Director.

The warehouse in Harlow was kitted out with a 40m wide, 6.3tonne gantry to handle the 20,000m2 of Neolith in 55 designs, four finishes and four sizes, and the 3,000m2 of Granith slabs that it stocks. Granith is natural granite, some of it from quarries owned by an associate company of The Size in Brazil, Angola, Zimbabwe and one just opened in Mozambique. The Size has also sourced other granites from South America.

The warehouse has a floor area of 3,000m2 with a yard and parking area outside of a similar size. It has easy access to the national motorway network for UK-wide distribution. 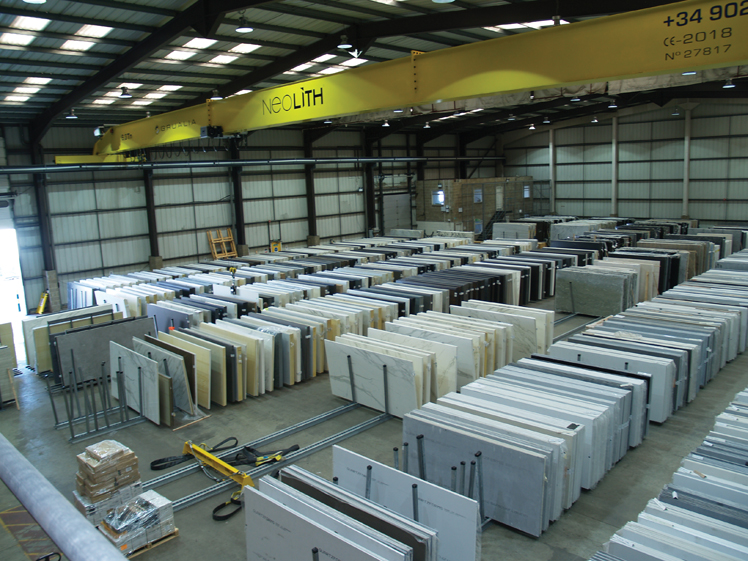 The Size (a name chosen because when Neolith was introduced it was as a large format slab of 3.6m x 1.2m) quickly developed ambitions beyond the capabilities of the makers of the machines it uses to produce Neolith. In order to satisfy those ambitions, The Size became involved in the development of equipment that could make Neolith in thicker formats than its original 3mm. Neolith is now available in thicknesses from 3mm up to 20mm, with 30mm material expected soon.

The company has just added four more designs for 2019. Various designs were shown to customers and the four most popular went into production.

The Size has always had cutting edge technology and the latest designs feature another innovation called HYDRO Neolith Digital Design 2.0 (HYDRO-NDD 2.0), which has been developed in response to the growing environmental concerns of customers. HYDRO-NDD 2.0 is a water based decoration technique that reduces the environmental impact of traditional printing methods, reducing the carbon footprint without compromising the quality of the finished product.

And The Size is proud of the quality of its product. Jesús Esteve says Neolith not only has the right look, but thanks to the company’s unique manufacturing process it also has uniform tension in the slabs to make them easier to cut, especially using the Terminator saw blades developed specifically for use with Neolith. 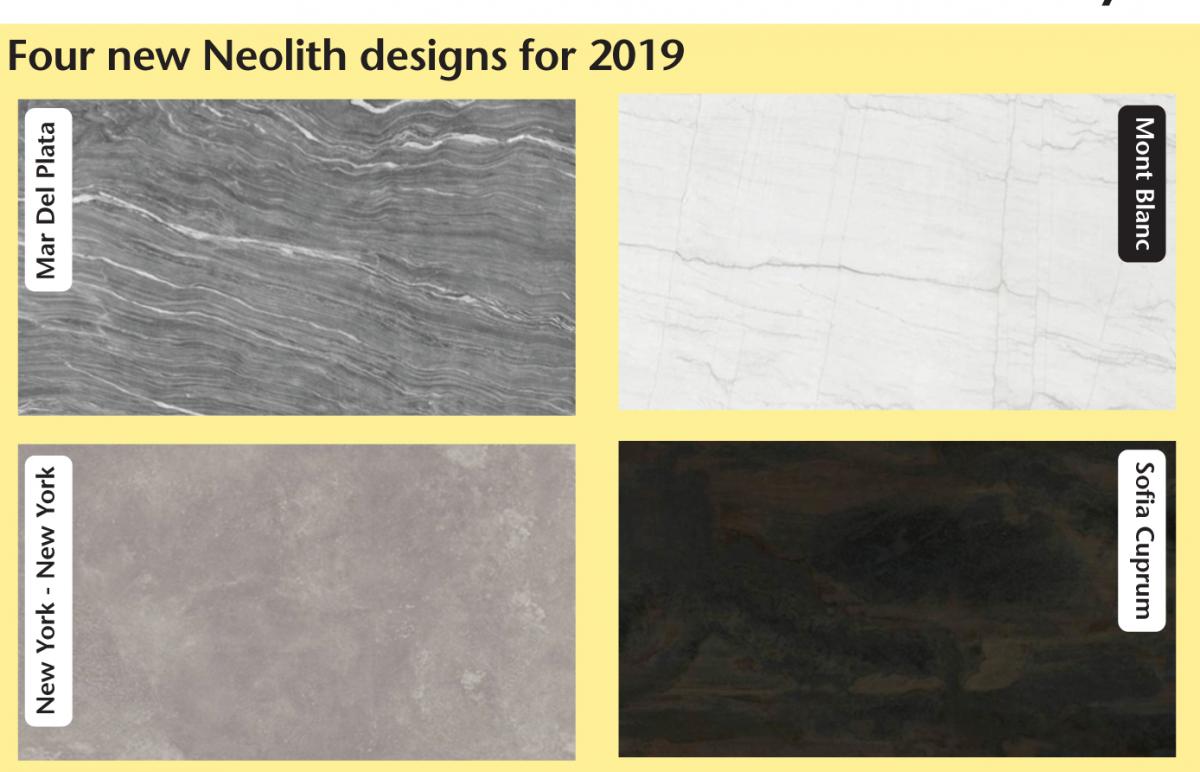 The aim of opening Neolith showrooms internationally is, says Jesús, to establish Neolith as “the reference brand”.

He says: “We want to establish the quality of the product, for fabricators as well as their clients. We were the pioneers in this category and it’s like flying a plane – the safest pilot is the one with the most hours.”

Francisco says that opening a showroom in the Business Design Centre on the edge of the Clerkenwell centre of architecture and design was “a no brainer”.

The warehouse in Harlow provides distribution back-up, not just to its own showroom but also to the distributors already stocking and selling Neolith in the UK, which the company will continue to work with. Being able to supply them from the Harlow warehouse means they will not have to carry so much stock. In Ireland, Stone Merchant will continue to buy directly from The Size in Spain using Euros.

The development in the UK might look like a response to Brexit but Jesús says Brexit did not originally form part of the company’s calculations in coming to the UK, although “it reinforces our aims of coming here”.

He says: “We thought the UK was such an important market that we didn’t have the resources here we needed.”

While there might be more uncertainty in the market as Britain readjusts to life outside the European Union, “Brexit or no Brexit we wanted to send a strong message to the market that they can get this product, that it looks good and it is durable.”

Francisco encourages stone fabricators to bring their clients to the showroom and the warehouse to see the range of Neolith and natural granite available. “Mrs Smith and her fabricator can come here and view the material, which is especially important with the natural granites. They can choose the slabs they want.”

Although exchange rates are possibly more volatile around Brexit (and if the value of the pound falls, the price of imports increases, of course) Jesús does not believe price is as important to domestic customers, at least, as getting a surface they want to live with.

“The UK is a very demanding market,” he says. “People know what they want and they want it fast. We try to deliver next day, especially in London.” Francisco adds that nowhere should be waiting more than five days for a delivery.

Neolith was not originally intended for use as worktops, and the different thicknesses mean it is still widely used as flooring and wall linings as well as worktops.

But it is also used as an exterior cladding, which is an application the company would like to see expand. To help it do so, it has developed a façade material it calls PURETi. This includes an ingredient developed by NASA to help remove unwanted gases from the air in the International Space Station.

On the façade of a building, each 2m2 of Purity is the equivalent of taking a diesel car off the road because it is said to react chemically with nitrous oxide to nullify it.

The Size also has its own, patented aluminium frame fixing system called Strong Fix. And because Neolith is not made with resins and does not include any petrochemicals in its manufacture, it has a Gold Certificate for LEED points.

Pictured below are some of the uses of Neolith internationally. 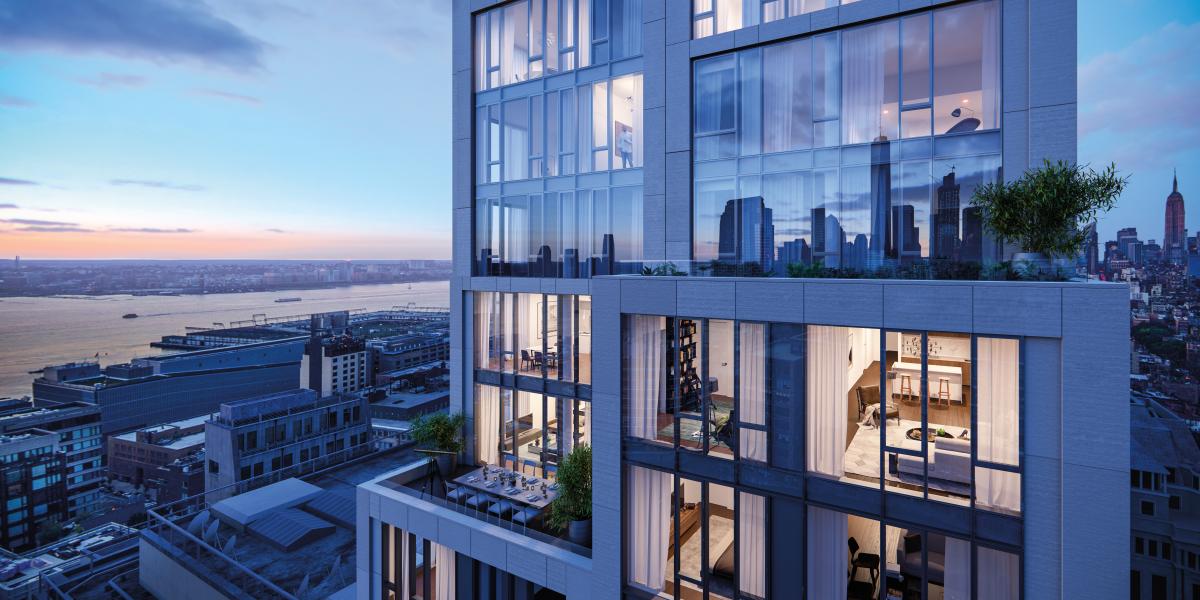 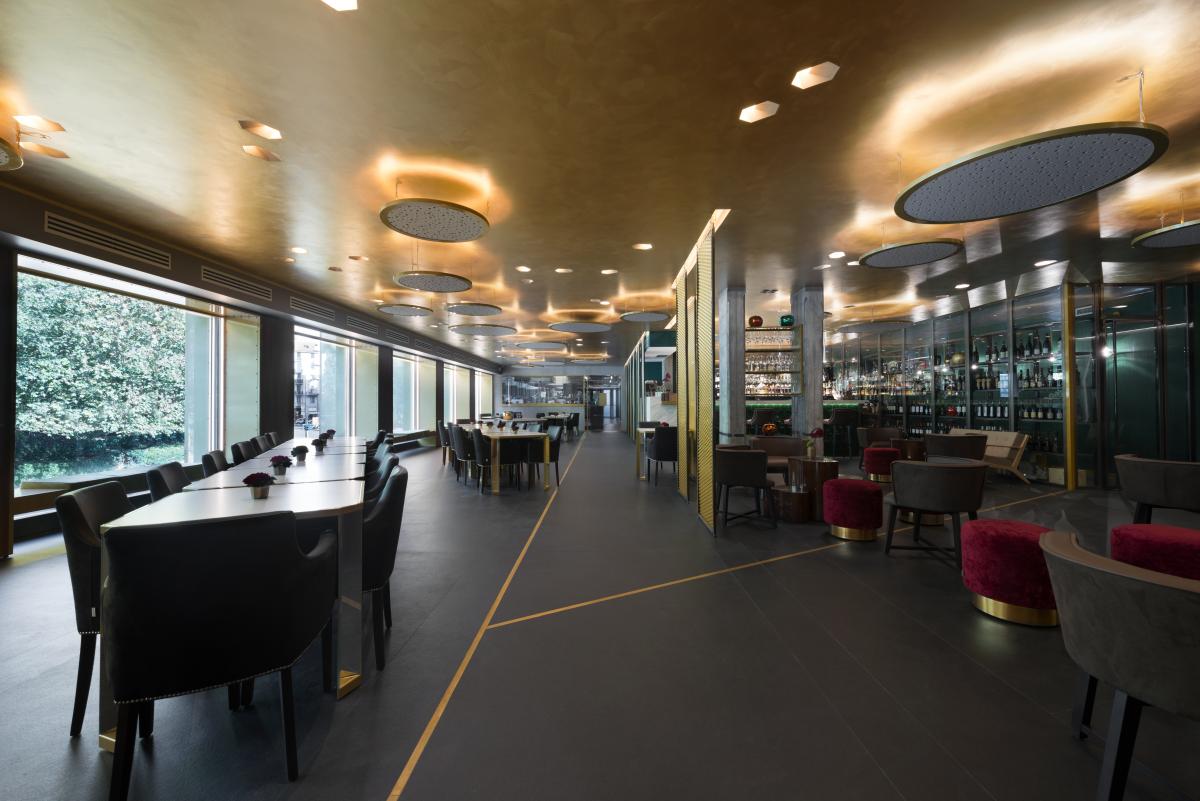 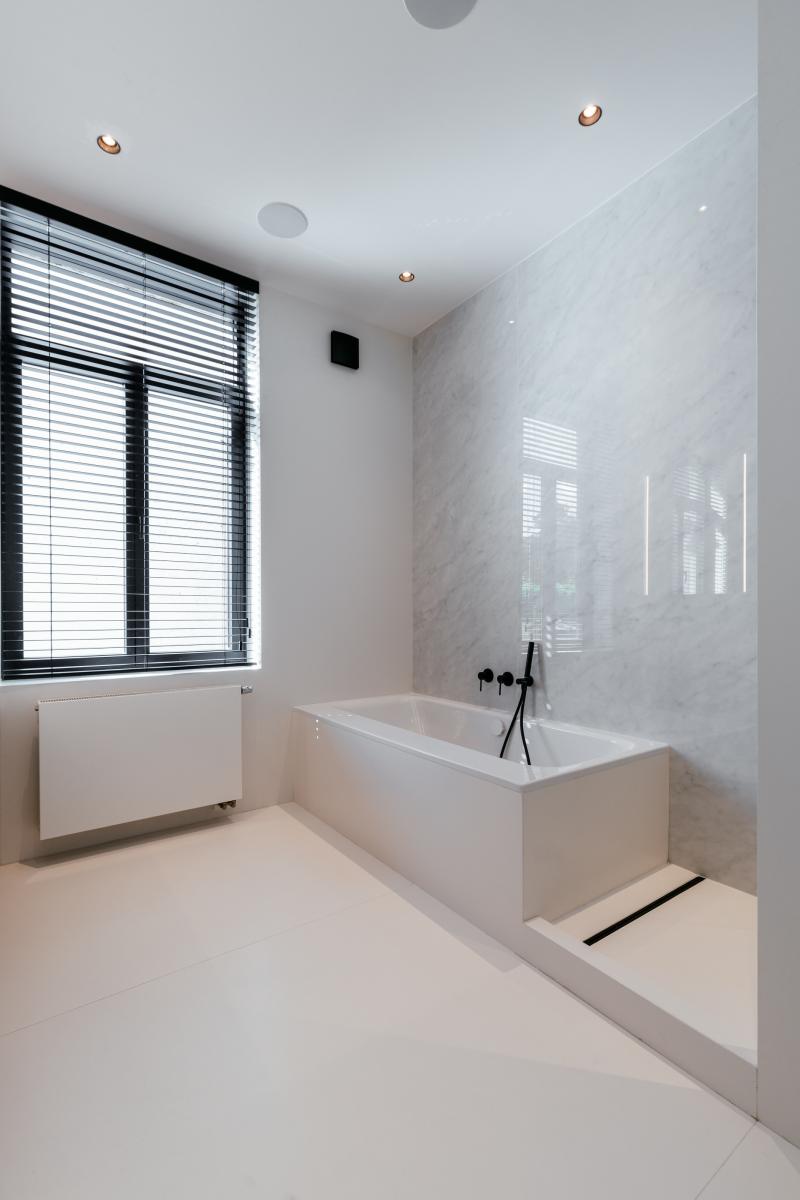 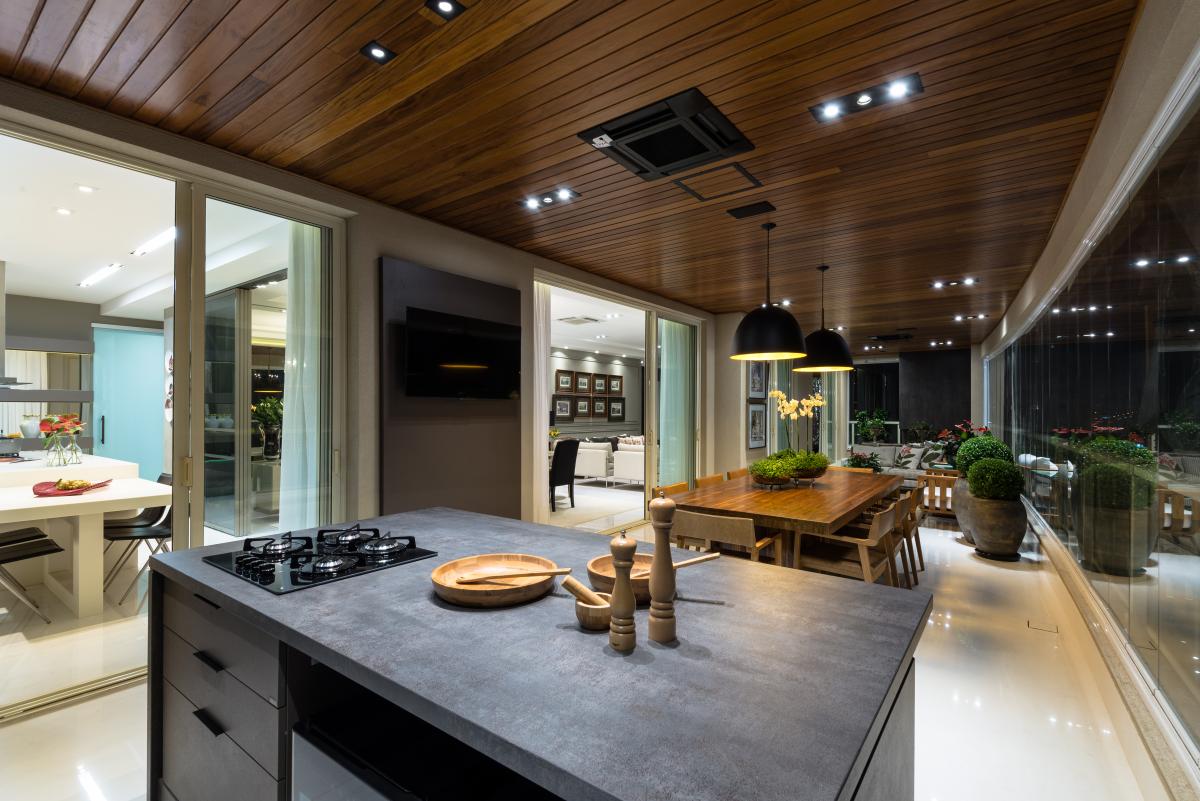 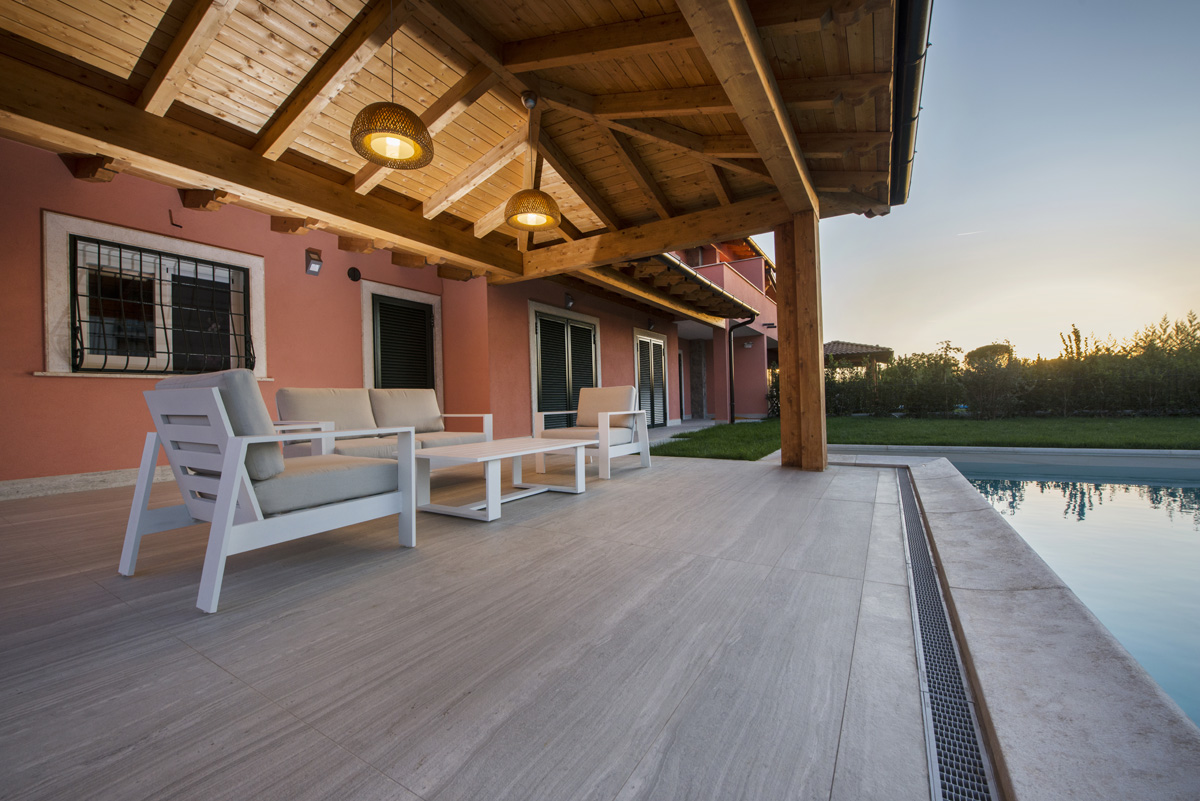