'Grave error' of using memorials as a footpath 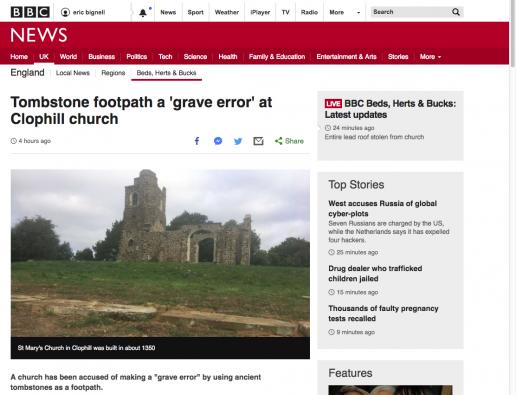 Click here to visit the BBC website, which was one of the places where the story was reported.

It might have more to do with the 'grave error' headline they can use than the story itself, but the consumer press have been reporting (on 4 October) that some people are upset about the re-use of gravestones as a path, even though it is a 'Poetry & Peace Path'.

The path was created by a trust that manages the derelict St Mary's Church in Clophill, Bedfordshire. It seemed like a good idea and the trust said it came about as a result of "professional advice" on saving the gravestones for the future.

The stones no longer marked graves. They are all more than 100 years old and had been moved in the 1960s when the church closed. It is now a ruin. The BBC quoted Church Society Vice President Alison Ruoff as calling the path "brilliant".

The idea was to create a remembrance garden along the path.

The trust said the stones had been vandalised from time to time, which was why Alison Ruoff was pleased they had been "used for something that can be made beautiful".

She added: "You can go to many churches and actually walk on people's gravestones in the aisle. You don't go leapfrogging around them, you just walk over them normally. They're there as a reminder of people who have lived their lives well (or not) in the past. Why should we worry about it? We get hung up on all sorts of strange things."

Apparently a number of people had called the path "disgraceful" and "disrespectful" on the BBC Three Counties Radio Facebook page.

One man said the path, which features poetry from young people, showed an "astonishing lack of respect".

He said it was a "Grave error, bearing in mind the villagers were not consulted and many are in uproar after only finding out about it yesterday".

The Trust is quoted by the BBC as saying it has followed best practice by re-using the stones and "the Poetry & Peace Path was seen to be the most appropriate and positive way of keeping and denoting respect" for the stones.