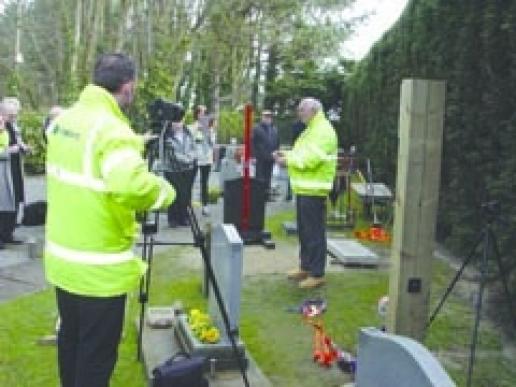 The memorial fixing test being videoed. The video has been posted on YouTube.

The National Association of Memorial Masons (NAMM) says it will not talk to Anton Matthews, who made a video of a memorial fixing system being tested (you can watch it here), until it hears from its solicitor.

Anton, who makes his own Stone-Safe memorial fixing system, has been trying to get the British Standards Institution to require standardised test conditions for the lawn memorial fixing systems to be included in BS 8415 . He wants a 1m square hole 600mm deep filled with sand to be used for the test, which is how the ground anchor fixing system is tested in the video.

Anton was invited to attend the latest meeting of the BSI Technical Committee responsible for BS 8415 to put his points.

Phil Potts says: “On behalf of the National Association of Memorial Masons I would like to express our surprise at the amount of influence Mr Matthews is trying to assert on the BSI Committee and on the Association, which are driven by his own commercial interests.

“After watching the video, NAMM has received numerous phone calls from confused and concerned members of the memorial trade that now believe that currently accredited ground anchors are unsafe to use.

“We believe there is no BS specification for the design of an artificial sand testing pit" [referring to the way the test has been carried out in the video].

“We have also asked for the BS 8415 committee’s view of this quite extraordinary behaviour by Anton Matthews, and how we can now redress the harm done to both BSI and NAMM by his actions in releasing this video.”

The Technical Committee agreed that test conditions needed to be consistent and reproducible at different sites and it was decided that existing conditions in cemeteries should be determined using a Mackintosh Probe and by soil sampling. NAMM should review data and carry out tests to determine fixing conditions in various cemeteries, said the Committee.

Phil says NAMM will always adhere to British Standards’ requests and that NAMM calls on Anton Matthews to await the results of the soil tests and data analysis requested by the Technical Committee.

Phil Potts: “He [Anton Matthews] is continuing to undermine current legislation in favour of his own commercial interests, as a direct result of this NAMM will no longer communicate with Mr Matthews until either the BSI Committee respond or our solicitors have advised us on the legal implications of the video he has placed in the public domain…”

Phil points out once again that since ground anchors have been used there have been no recorded incidents of memorials causing injury.