Notre Dame after the fire 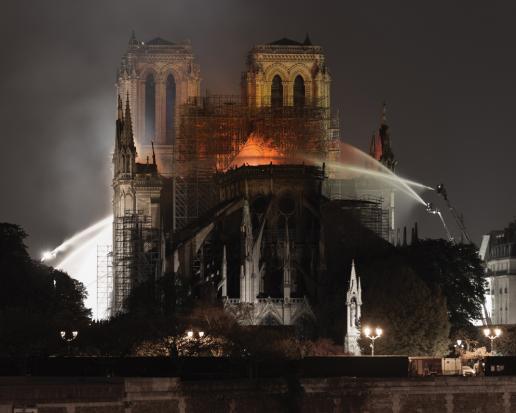 The fire at Notre Dame Cathedral last year shocked Paris and the whole world. President Macron promised the building would be restored within five years. This is the story so far.

Say ‘Notre Dame’ in Britain and what generally comes to mind is Paris and the white limestone pinnacle of French medieval construction that is the Cathedral of Notre Dame de Paris at the east end of the Île de la Cité.

It is an indication of the affection in which the cathedral is held in Britain that after the fire there last year the Master of the Worshipful Company of Masons wrote a letter to The Times describing it as ‘deeply upsetting’ and commending the skills of British masons to assist in the repairs.

The cathedral stands 90m tall to the top of its spire – or it did until the spire collapsed in the conflagration that engulfed the roof of the cathedral on 15 April last year.

The cause of the fire is not confirmed, although as the cathedral spire was surrounded by 500tonnes of scaffolding as part of a £5million renovation project when the fire started, uninformed speculation has tended to involve the work that was being carried out there at the time. Others believe it was an electrical fault.

The French President, Emmanuel Macron, has promised the cathedral will be restored to its pre-fire splendour within five years. If it is, it will be a monumental achievement.

There has been good and bad luck involved in the fire. The fact that it caught hold in the first place was bad luck. A fire alarm was activated, but the search for the fire started in a neighbouring building and it was half-an-hour before the blaze was discovered. By then, the fire alarm was superfluous because smoke was rising from the roof.

The fire brigade arrived but did not have suitable access equipment to reach the roof above the 33m high walls and the fire progressed through the oak frame of the roof, which had not been fitted with fire barriers.

Since then, the French have visited York Minster to see the fire barriers fitted in the roof there and to look at the method of protection used for the stained glass of the Great East Window, where a second layer of clear glass has been used to protect the medieval material. The plan is to use the same method at Notre Dame.

On 15 April 2019 the fire at Notre Dame had been heading towards the bell towers at the front of the building where heavyweight timber frames hold 10 hefty bells. If the frames had caught alight and the bells had fallen, it is believed the damage would have started a chain reaction that would have lead to the collapse of the whole building.

The fire officers could not reach the top of the 68m high towers from the outside, so bravely took hoses inside to prevent the fire  from spreading to the timber in the towers, which they succeeded in saving.

The medieval masons who constructed the massive cathedral had put the lead-covered wooden roof structure above a vaulted ceiling constructed of 800m3 of limestone, intended to protect the interior in case the roof ever did catch alight. It was largely successful. Below it, rattan chairs, priceless paintings and stained glass windows were largely undamaged. A gold-plated cross above the altar and the Pietà, a statue of the virgin Mary cradling the body of Jesus, were among many priceless works of art that were protected from the effects of the blaze.

Although the firefighters had known not to pour water on the medieval stained glass windows, which could have caused them to shatter if they were hot, some suffered minor cracks from the heat, although the degree of damage was remarkably small.

Two large areas of the vaulted ceiling and a number of smaller areas did give way due to the heat and the weight of the collapsing spire and roof.

The burning lead made the atmosphere deadly with lead fumes and dust and coated some of the stained glass with the dust.

However, it is proving uncomplicated to remove because the windows had not been cleaned for a century. The lead settled on the layers of accumulated dirt, which has made it simple to remove with cotton wool and distilled water.

Much of the limestone under the roof has remained essentially unharmed by the heat, which might surprise anyone who has ever burnt limestone to make lime putty or mortar. But to burn limestone takes a temperature of about 800-900ºC. And it  takes time. Once lime has been burnt, it turns to powder in contact with water and gets hot enough as it does so to produce water vapour. More water turns it to putty.

It is estimated that the fire at Notre Dame reached a temperature of up to 800ºC in places. That is well above the 327.5ºC melting point of lead and also well above the 600ºC at which lead oxidises into a dust.

It is anticipated that it will be possible to re-use some of the 15% of stones that collapsed from the vaulted ceiling, although some new stone will also be necessary.

The limestone that gives the cathedral its brightness in the sunshine was quarried from what subsequently became catacombs beneath Paris. The catacombs today hold the bones of more than six million people and are a tourist attraction.

An alternative source of stone will have to be found and to make sure it is compatible with the original the geologists of the Laboratoire de Recherche des Monuments Historiques (LRMH) are among the organisation’s scientists tasked with leading the restoration of Notre Dame in the wake of the fire.

The LRMH scientists work in the former stables of a 17th century château in Champs-sur-Marne, in the eastern suburbs of Paris. They have contributed to the preservation of some of the best known and most important monuments of France, such as the Eiffel Tower and the Arc de Triomphe.

Véronique Vergès-Belmin is a geologist who heads the LRMH stone division and has been sorting the stones of the cathedral. If heat has damaged any of the fallen stones clearly they cannot be re-used and Véronique has found that the colour of the stones provides clues about how hot they became.

She says that at 300-400°C, iron crystals in the stone begin to break down and turn the surface red. At 600°C the colour darkens as the crystals become black iron oxide. Above 800°C the limestone starts to lose its iron oxides and becomes quicklime.

Another stone conservation scientist, Jean-Didier Mertz, discovered micro-cracks  in the vaulting stones, which has increased the porosity of the stone.

Although the firefighters carefully avoided the stained glass windows, they had no choice but to drench the stone vaulting. The porous limestone increased its weight by as much as a third.

In the laboratory, Jean-Didier discovered the stone could absorb 2kg of water and take six months to dry completely. In the cathedral it will never dry completely because there will always be some moisture in the air. For now it is exposed and continues to be made wetter by the rain falling on it. And it cannot be covered until the now deformed and precarious scaffolding erected for the original renovation under way when the fire started is removed.

Another of the LRMH geologists is Lise Leroux, who determined that the stone used in the vaulting was a limestone from a less dense bed of stone than the walls and flying buttresses to make it easier to use.

She identified the bed in the catacombs from which it came by a certain plankton fossil found only in that bed.

The collapse of about 36m2 of the vaulting under the spire has weakened the roof. If it collapsed there would be a danger that the walls would fall inwards, again leading to a cascade failure and the collapse of the whole building.

The ideal solution would have been to erect a frame under the roof to hold the walls up and stop them falling inwards. But the area was too precarious for people to work in.

Instead, wooden supports were erected under each of the external buttresses to hold them up and stop them exerting an inward pressure on the walls .

Of course, when the cathedral was built 850 years ago the stone was worked by hand and the exact shapes under the buttresses were all different, which meant each timber support had to be made individually to fit the space.

The fact that the previous restoration work had already led to the erecting of scaffolding at Notre Dame was a major problem after the fire.

As new stone needed for the renovation work can no longer be taken from the mines under Paris, the conservators will probably source stone from the quarries still active around the capital, like those of St Maximin, Vassens, La Croix Huyart and St Pierre Aigle just to the north of Paris. All these stones have been used on heritage buildings in Paris. They are also available in the UK from Steve Turner’s companies of Pierre Heritage and Amarestone.

Last year, Steve supplied some St Maximin to a project in London that had originally been clad in one of the benches of St Maximin and wanted matching stone for some additional work. Amarestone also made a stone altar using St Maximin for a private customer in the UK who wanted to recreate a chapel that Matisse designed in Vence, near Nice (pictured below). 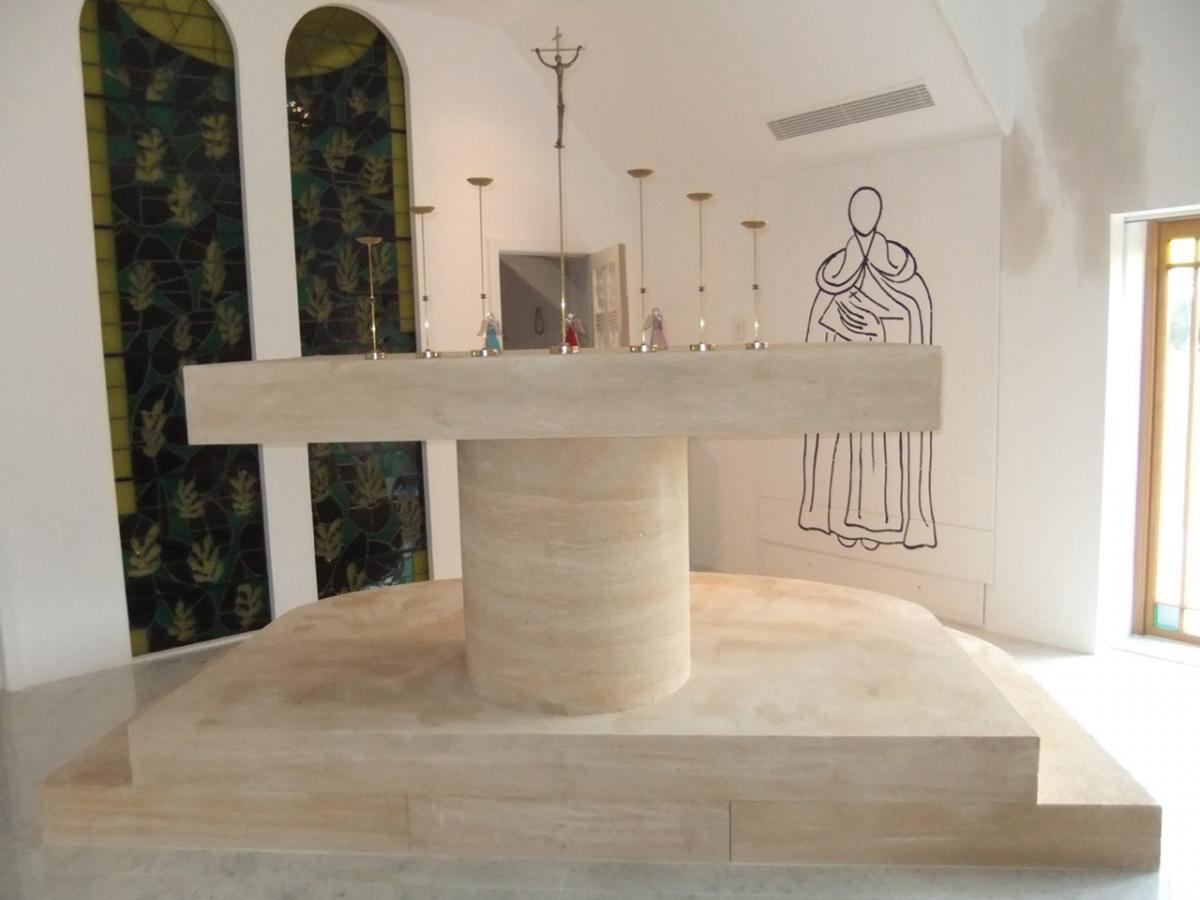 The famous Parisian limestone of St Maximin was used by Amarestone of Arborfield, Berkshire, to make this altar as part of a private chapel. The customer wanted to build his chapel in a barn in his garden in the style of Chapelle du Rosaire, created by Matisse in the hilltop town of Vence, overlooking the Mediterranean on the Cote d’Azur. The flooring of the chapel was easily identified as Italian Carrara marble with green slate cabochons, but the stone for the altar took a bit more detective work. It took Amarestone’s network of contacts throughout the French stone industry to identify it as St Maximin, a stone widely used in Paris that could be a contender for use in the renovation of Notre Dame Cathedral.