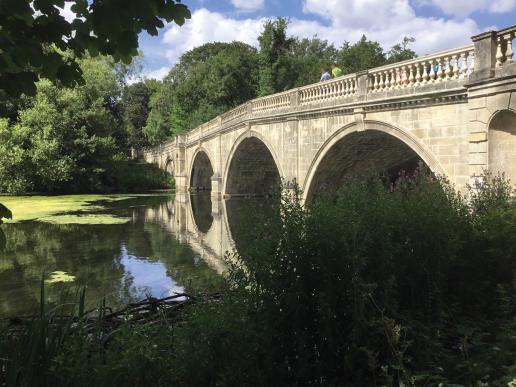 The repaired and renovated ornamental bridge at Clumber Park in Nottinghamshire, one of the National Trust's most visited parks. Photo: Claire Santry

In the late snows of March 2018 somebody decided to take a joy ride in a car around Clumber Park, a popular National Trust property in Nottinghamshire that is one of just a handful of Grade I listed parks in England. For no apparent reason, they concluded their drive by repeatedly ramming the car into the stone balustrades of a Grade II* listed ornamental bridge more than 200 years old.

Part of the extensive damage caused can be seen in the photograph below. The main picture shows the bridge as it now appears, thanks to the National Trust, the architects of Rodney Melville + Partners, and the specialist contractors at Croft Building & Conservation. 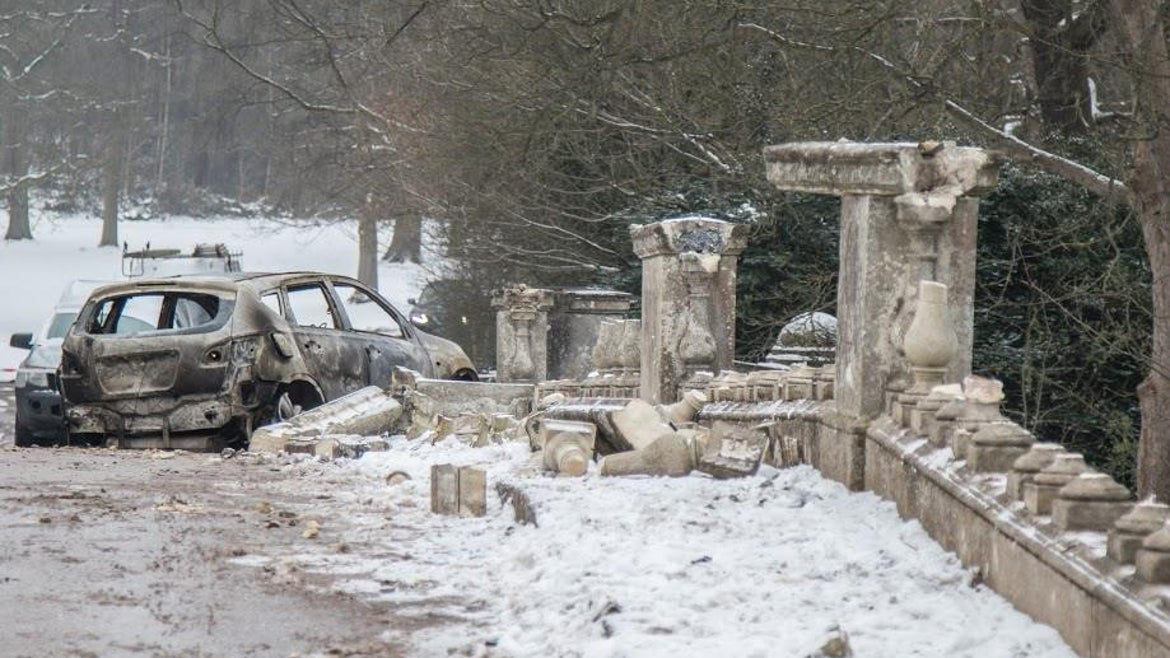 The bridge as it was found on the morning of 3 March 2018 after a car had been repeatedly driven into the stone balustrades and then set alight. Photo: National Trust

And the fact that the bridge needed such extensive repairs as a result of the vandalism, has actually benefited the structure as a whole because it meant other work could also be undertaken, notably the removal of earlier hard cement repairs and pointing under the arches.

Some of the balusters, originally made from the stone of Steetley Quarry near Worksop, like the rest of the bridge, had even been replaced in the past with concrete replicas, because this was not the first time the bridge had been hit by vehicles. At one time it was part of the route of the famous RAC Rally.

The bridge dates from the 18th Century and crosses an ornamental lake that was created by the damming of the River Poulter as the Dukes of Newcastle, who owned the estate for more than three centuries, successively left their mark on a landscape that had originally been part of Sherwood Forest of Robin Hood fame. The Duke of Newcastle decided to take 3,800 acres of the forest for himself to create a hunting park for Queen Anne in 1707. The views the landscaping created are now being recreated in a 10-year programme.

Although there is no longer a house in the park, most of it having been demolished after a devastating fire in 1879, the ornamental bridge, built by Stephen Wright, the same architect who built the house, and the lake it crosses are features that help make Clumber one of the National Trust’s most visited attractions.

The damage to the bridge in 2018 was seen by Beth Dawson, National Trust General Manager at Clumber Park. “The morning I saw the bridge had been vandalised in such a way it was completely heart-breaking,” she said.

To determine how a few minutes’ mindless destruction could be rectified the National Trust referred to the architectural practice of Rodney Melville + Partners, which specialises in the conservation, repair and alteration of historic buildings and the design of new buildings in historic settings.

Director Mark Balkham was in charge, with Heather Boxhall the pre-contract architect on the project and Simon Revill the post-contract architect. Stafford Holmes, a consultant with the practice, was also involved in the selection of stone and mortars.

A lot had fallen into the water, but a concrete deck under the bridge, added at some point to stabilise it and stop it subsiding, extended out either side of the bridge under the water and most of the stone had landed on that.

A police diving team assisted the National Trust in recovering the stone and Heather Boxhall recorded which side each piece was found so it might be restored to its original position. In the stone yard she recorded every fragment salvaged.

The stone itself was in generally good condition. Some of it had survived intact and could be re-used. Other elements had broken into some pieces. A decision was made that where a pilaster was in only two pieces it would be dowelled back together, otherwise it would be replaced.

These incompatible earlier repairs were discarded, leaving Croft Building & Conservation responsible for replacing nearly 300 of the balusters as well as 16 linear metres each of plinths and copings and various other inserts and replacements, including about 5m2 of Yorkstone paving.

It was not clear what the stone was that had been used for the original construction of the bridge, so samples were sent to the British Geological Survey at Keyworth on the outskirts of Nottingham for analysis.

It was determined that the stone used was magnesian limestone from the nearby Steetley Quarry, near Worksop, which is not surprising as the Duke of Newcastle owned the stone and mineral rights in much of north Nottinghamshire and north-east Derbyshire, and it is understandable he would have wanted his bridge to be built of materials to which he held the rights.

Unfortunately, the stone was no longer available from Steetley, but other quarries in the vicinity produce a similar stone and, after testing various samples, the stone from bed four in Cadeby Quarry was chosen and bought from Blockstone. Bed heights of 800mm were required so the 660mm balusters could be made oversize and dressed down on site according to their location on the sloping balustrade plinth.

To determine the formulation of the lime mortar mixes to be used, samples were taken from various locations on the bridge to analyse. Stafford Holmes, who is on the Committee of the Building Limes Forum (click here to read more about the Building Limes Forum) added his expertise. Hot mixed mortars were used with locally sourced aggregates and Calbux 90 quicklime produced by Tarmac in Buxton. Different areas of the bridge required mortars with different levels of hydraulicity. Croft produced more than 30 mortar mix samples, five of which were selected for the project.

The contractors worked on the outside of the bridge from scaffolding on pontoons supplied by Pontoon Hire. Matt Davis, the Crofts Director who was Contract Manager for the project, says the pontoons were remarkably steady.

So the repointing could go ahead through the winter, Croft constructed enclosures big enough to work in that could be heated. The masons appreciated that because a microclimate in the valley where the bridge is meant it could be several degrees colder than the surrounding parkland.

Stone for the balusters was sent to Ranco to be turned on the company’s CNC lathe and returned to the Croft bankers yard at Lichfield to be finished by hand. There are locating squares top and bottom and the balusters are dowelled and resined into the plinths and copings.

Cementitious repairs carried out over the years were replaced using lime mortars by Croft masons Ron and Mick Sinclair, who are brothers, using their own ‘potions’ to blend the repairs into the original stonework. Croft employs 78 people in total and those working at Clumber also included masons Richard Hunter (the Site Manager), John Pilgrim and Ryan Carter, and conservator Abi Bestwick.

Before the Covid-19 lockdown, the masons were answering an inquisitive public’s questions about the project through the Heras fencing. When lockdown came, Croft was four or five weeks from completion. The company was also locked down, returning to site after the Spring bank holiday, maintaining distancing, washing in the Oasis cabin that had been onsite from day one, but taking breaks in their own cars.

With the repairs and renovations now finished and the bridge looking better than it has for decades, thanks to the removal of the previous ad hoc repairs, it is now open again to pedestrians. However, cars are banned and both ends are blocked off to vehicles by logs and barriers. There are plans to keep cars off permanently by installing bollards.

Pictured below. The restored bridge is now open to pedestrians again but vehicles are being kept off by temporary barriers, even though the final part of the project involved repairing the damaged road and surfacing it with tar spray and stone chips. There are plans to install bollards at either end to ensure there is no repeat of the vandalism in 2018 when a car was repeatedly driven into the balustrades.

The pictures below show some of the stone recovered from the water, and the pontoon with scaffolding from which the masons worked. It was decided that original stone would be replaced if it was still in one piece, or in two pieces that could be joined back together. That still meant nearly 300 new stone balusters had to be made. 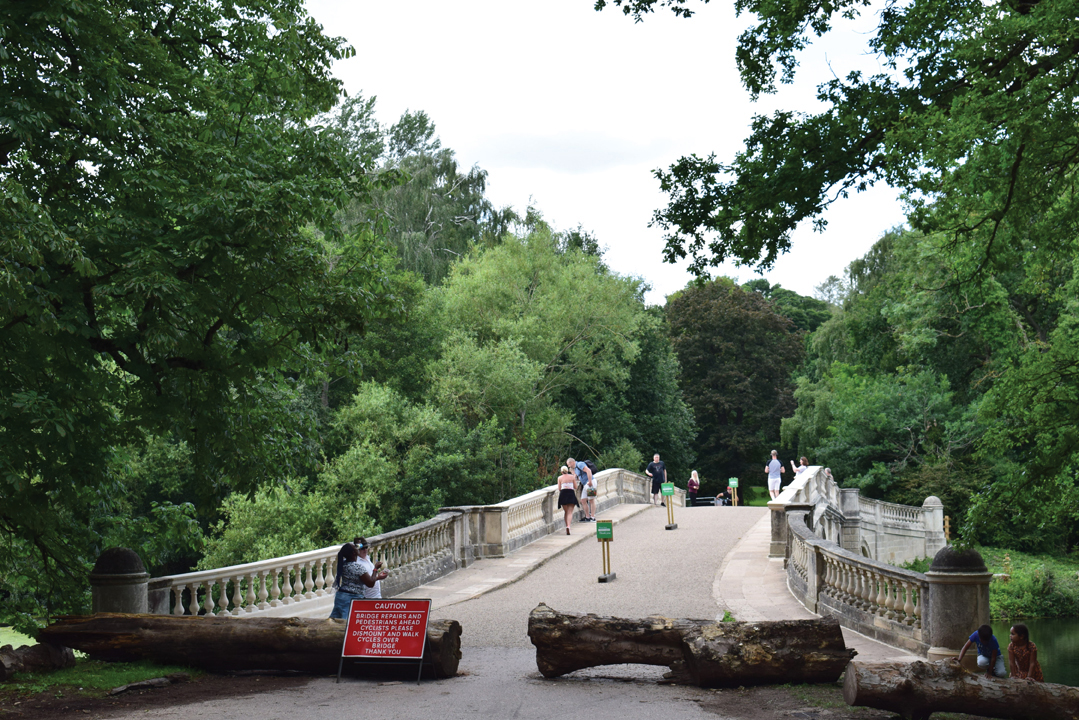 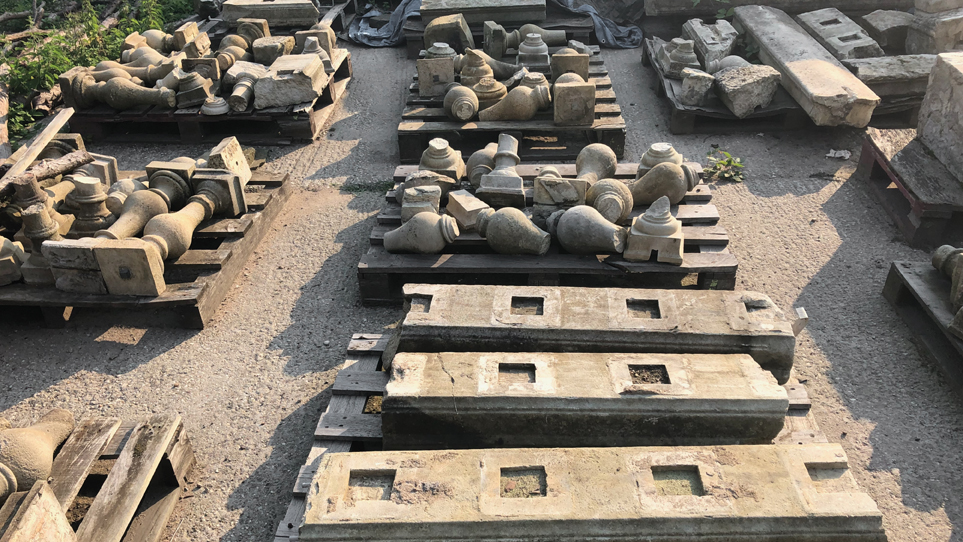 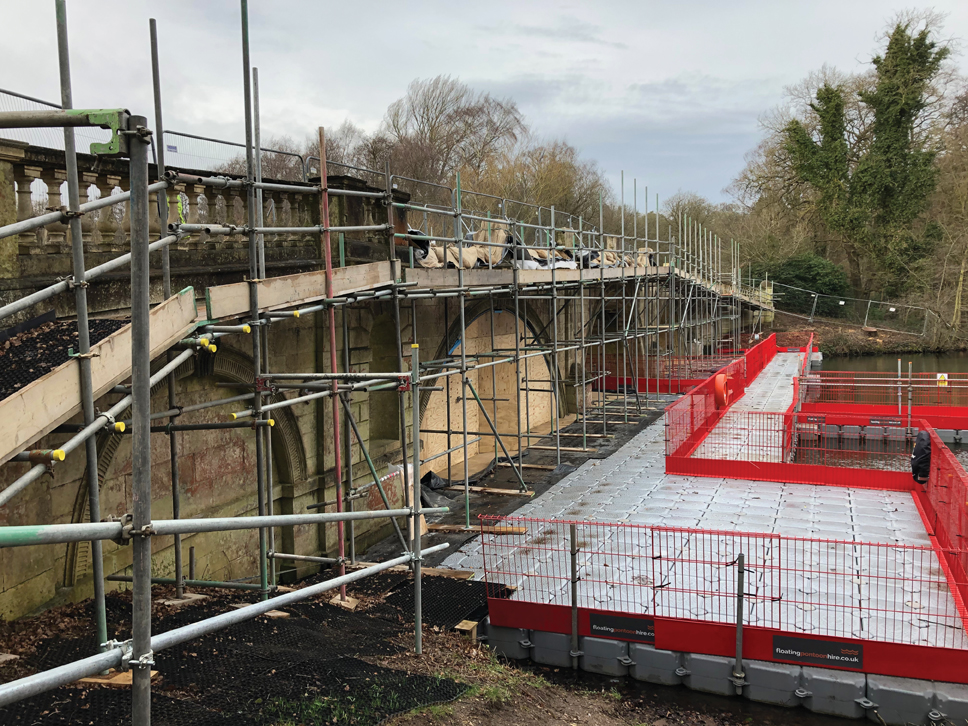 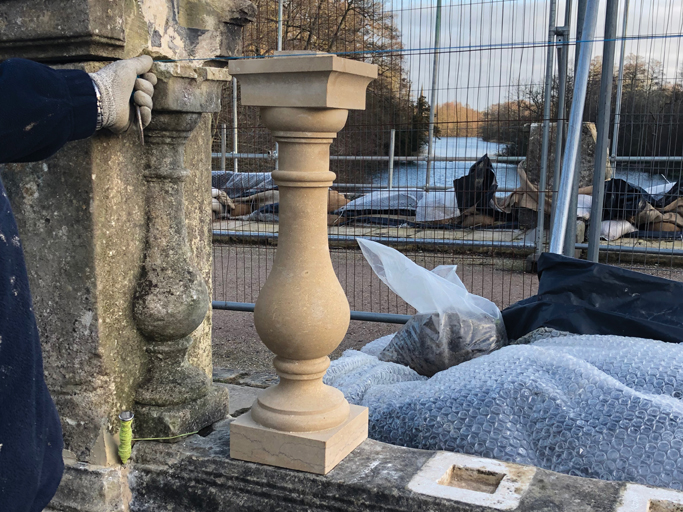 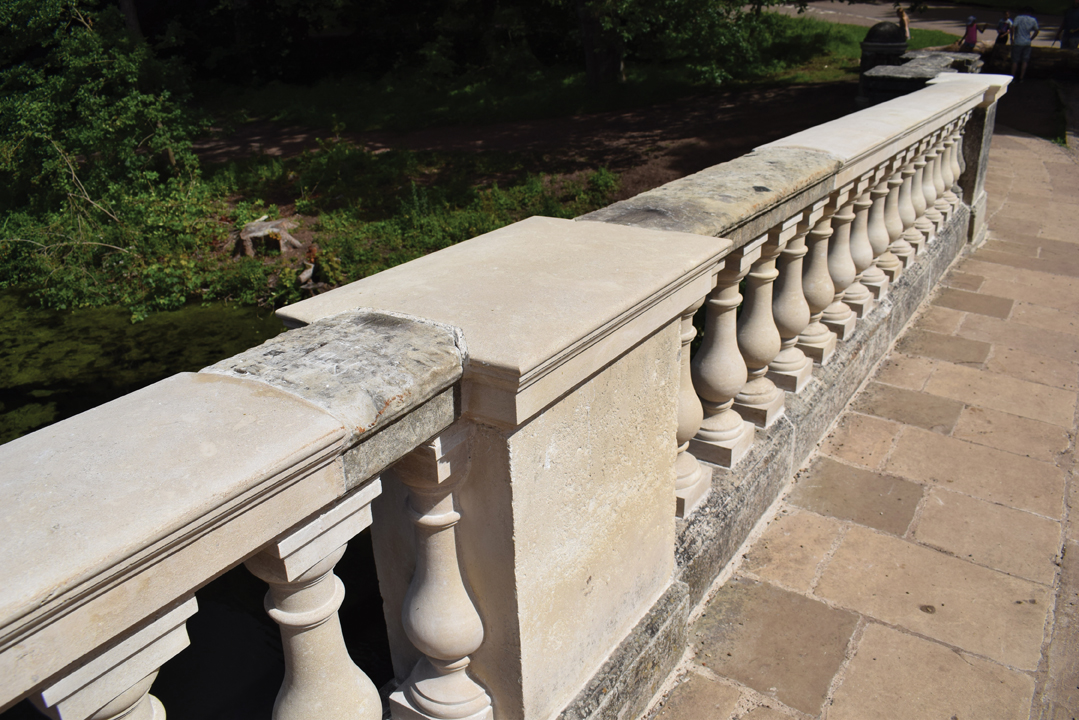 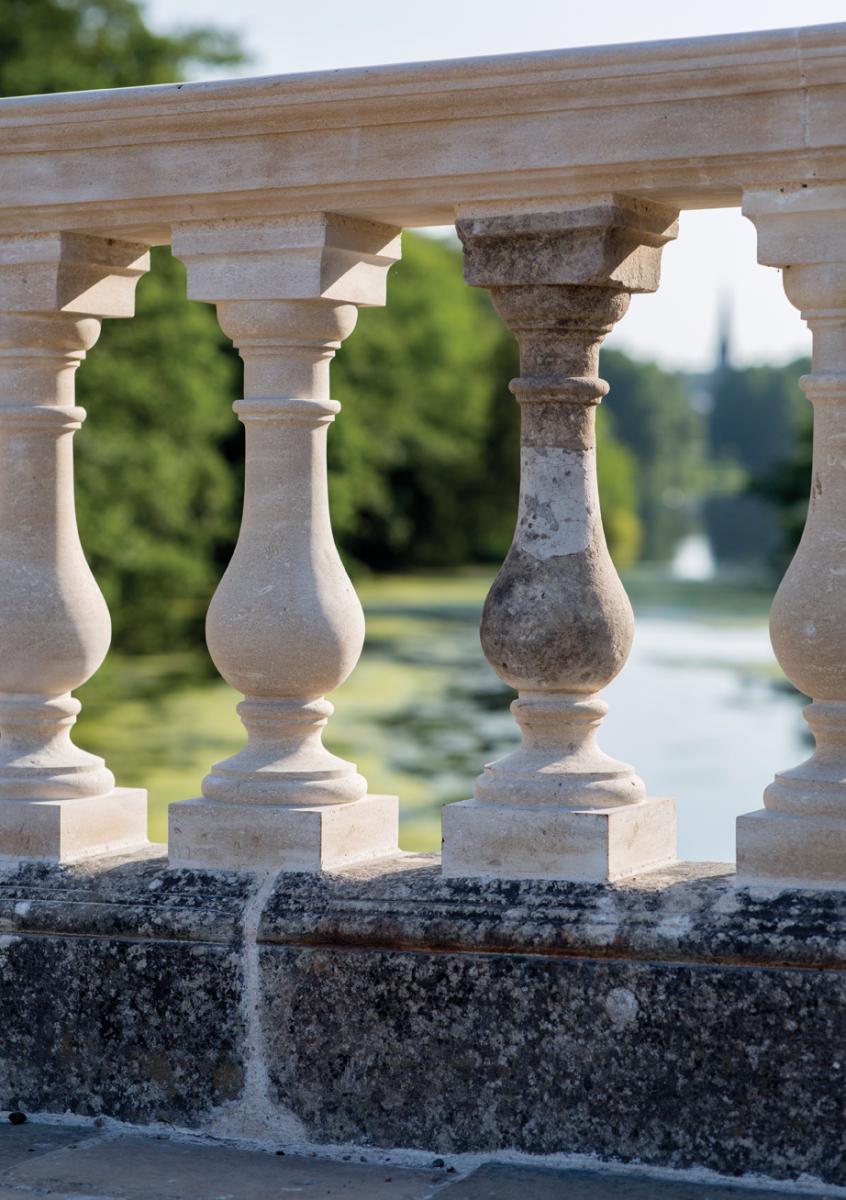