The time of tests : Frost Resistance 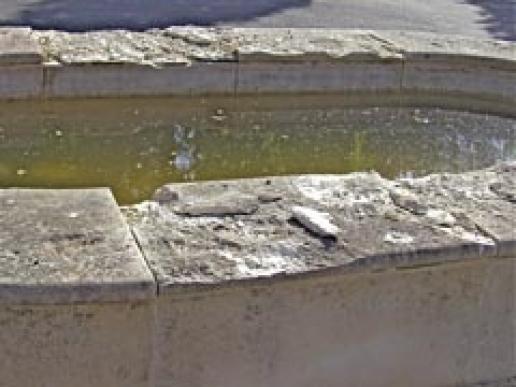 Led by Europe, more tests are being devised all the time to try to evaluate stone. In this column Barry Hunt explains the tests and discusses what the results show… and what they don’t. This time he looks at frost resistance testing.

If there was ever a test that might be described as contentious, the frost test is probably the one that comes closest. There have been many years of research across different continents to try to determine the seemingly impossible: having a single frost test that predicts the potential durability of stone in cool climates.

This research has floundered because of the inherent natural variability of stone, the limitless subtleties of construction and the local environments created… and, of course, the fickle nature of the weather controlling how damage to stone actually occurs.

There are different theories of damaging ice formation and no real consensus as to what is truly going on. Commonly, an engineering view has been taken and, typically, frost tests that employ a set of repeatable test conditions have been designed, regardless of whether these conditions will ever be encountered in real life.

The problem with all frost testing is the conditions you select to begin with. Account must be taken of sample size, shape, texture, saturation, humidity, freezing rate, thawing rate, air circulation, orientation, water quality, immersion time, insulation properties, pore networks, geological structures such as veins or large fossils… and so the list goes on. Change any one of these factors and the test changes.

In the past, some countries produced many different variations of frost testing, leaving things open to great misunderstanding and abuse. Once you are running a frost test there is then the problem of assessing what is happening and determining when to terminate the test and comment on the findings.

The European Standard for frost testing is EN 12371 and involves freezing samples in air and thawing them in water. During the testing the samples are regularly inspected and assessed against a number of visual criteria. They are weighed to determine any mass loss and, finally, subjected to dynamic elastic modulus testing which can be used to suggest the initiation of microcracking or other hidden damage.

For what is known as the ‘Identification Test’, the cycling is continued until at least two of the test samples exhibit cracking greater than 0.1mm in width, detachment of small fragments greater in area than 10mm2, alteration of material in veins, a decrease in volume greater than 1% or a decrease in dynamic elastic modulus of at least 30%.

The number of cycles completed until any of the above criteria is reached is recorded, along with any measurements up to that point.

These must be regarded as arbitrary limits, but a halt has to be called at some point.

Nevertheless, this test may go on for hundreds of cycles without significant changes, making it time consuming and expensive, especially when it is obvious at a much earlier stage that a material is showing good resistance.

Many opt for the alternative ‘Technological Test’, which is usually instigated by a requirement to meet one of the product standards. Such testing involves subjecting samples to a set number of cycles and comparing before and after performance, usually via a mechanical test such as compressive or flexural strength.

With insufficient research data it remains difficult to assess what any changes in strength actually mean and where criteria have previously been set, these are likely to be removed.

If there is a big change in strength is it due to the vagaries of the test or the stone itself?

A stone may perform much better or worse in use where, say, freezing occurs only in one direction or saturation is from a hidden persistent source.

Thus it would appear that frost testing is doomed to be labelled as having minimal benefit. Certainly it should be playing second fiddle to good geological and environmental appraisal.

Furthermore, in consideration of this and the energy required to run such testing, the frost test would appear to be environmentally unfriendly. It would be straightforward to adopt minimum strength and maximum water absorption limits based on the performance of many types of stone already known to offer satisfactory resistance and to accept that, while this may not be perfect, it is certainly a lot easier to do and understand.

The advice offered here is intended to provide helpful insights but should not be regarded as complete or definitive. Professional advice should always be sought in respect of each specific stone-related issue.