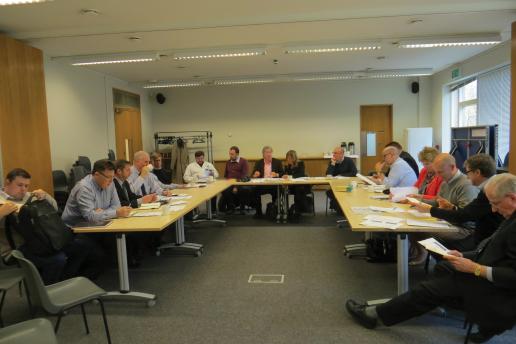 Discussing training in the stone industry at a meeting in the Building Crafts College.

It has to be said: there was not a lot of evident enthusiasm for the government’s new apprentice programme when a group of those interested in training in the stone industry met to discuss the proposals at the Building Crafts College this month (22 March).

The meeting was losely under the auspices of the Natural Stone Industry Training Group (NSITG) and was chaired by Michelle Turner of Stone Restoration Services, who is vice-chairman of NSITG.

There were 22 people there, including representatives of Stone Federation Great Britain, CITB and the Cathedral Fellowship, as well as seven stone companies. They agreed to submit an expression of interest to BIS (the Government Department for Business, Innovation & Skills) for approval to develop a new suite of stonemasonry Trailblazer Apprenticeships.

The apprenticeships have to include what are already being talked about as KSBs (knowledge, skills and behaviour requirements needed for a trainee to be considered competent) and ‘rigorous end point assessment by testing’ (which is what we used to call an exam). The aim is to achieve consistency, increasing confidence in (and value placed on) the apprenticeship, both by the apprentice and potential future employers.

One other criterion is that the apprenticeship period has to be more than a year long.

The government wants its new apprenticeships to be simple, straightforward and adaptable to be of maximum benefit to employers as well as giving employees a sound basis for a career by learning skills that are transferable.

The apprenticeships will be open to anyone over 16-years-old, no matter how much over that age they are. However, simply calling them apprenticeships means they are likely to attract youngsters in the main and when the government says, as it does, that it wants to reach 3million starts by 2020, it is hard to imagine this is anything other than a policy aimed at getting youngsters into work.

Some companies NSS has spoken to say they find it hard to justify the costs of training when eastern Europe offers a plentiful supply of already skilled people willing and able to work efficiently and without much supervision.

As ever, the cost of the training will be paid for by a levy, which will start to be imposed from April next year (2017). It has been set at a rate of 0.5% of a qualifying firm’s wages bill. It will be paid through PAYE so will presumably be based on the PAYE wages bill rather than including what is paid to subcontractors or others in other ways (although the government has not confirmed that yet). The levy kicks in initially when a wages bill reaches £3million a year.

England, Scotland, Wales and Northern Ireland all have separate arrangements, but the aim broadly is that employers will be able to reclaim their contributions through a digital voucher system that can be used to pay for apprenticeship training.

The government could not quite convince itself to cover the whole cost of training (unlike now) and will expect companies to meet a third of the cost of courses themselves – and the apprenticeships are required to include some off-site courses. The government describes this as ‘empowering’ companies by giving them control of the training budget.

If companies paying the levy do not use their digital vouchers, the money will be transferred to companies that do take on apprentices.

And that, in a nutshell, is what the government is proposing for its new apprenticeship programme.

For a sector to take responsibility for its own apprenticeship programme it has to find 10 companies prepared to be Trailblazers. To date, the stone sector does not have 10 companies committed to being Trailblazers but Ian Major, who manages Stone Federation Great Britain’s training arm, StoneTrain, is confident when it comes to it 10 will be found.

If they are not, colleges or others might step in to create the apprenticeships. At the stone sector meeting it was generally felt, albeit somewhat reluctantly and with some confusion about quite what would be involved, that it was probably better if the industry created its own apprenticeships rather than having to accept those produced through another route.