Centre of excellence opens its doors for second annual competition 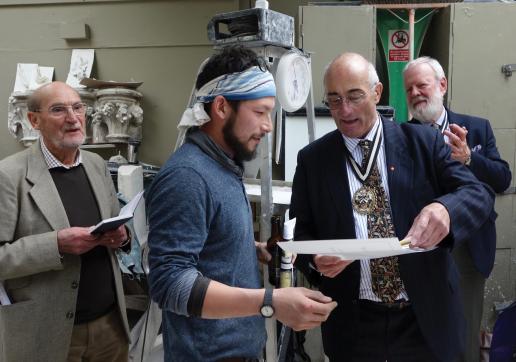 Left. The Worshipful Company of Masons, the stonemasonry Livery Company, donated a £300 prize for the carving competition. Nicholas Payne, Master of the Company, is pictured here presenting the prize for Best Carving to Akira Inman. Judge Tony Webb is on the left.

The carving competition started last year at the world-renowned City & Guilds of London Art School was so successful it was decided to make it an annual event. This year’s contest was held 5-6 May.

For the second year running the Historic Carving Department at the City & Guilds of London Art School has opened its doors to the public as a contribution to London Craft Week, which took place at the beginning of May.

This annual event showcases exceptional craftsmanship through a journey-of-discovery programme that features hidden workshops and unknown makers demonstrating their skills, as well as more established masters, famous studios, galleries and shops that celebrate all that is hand-made. 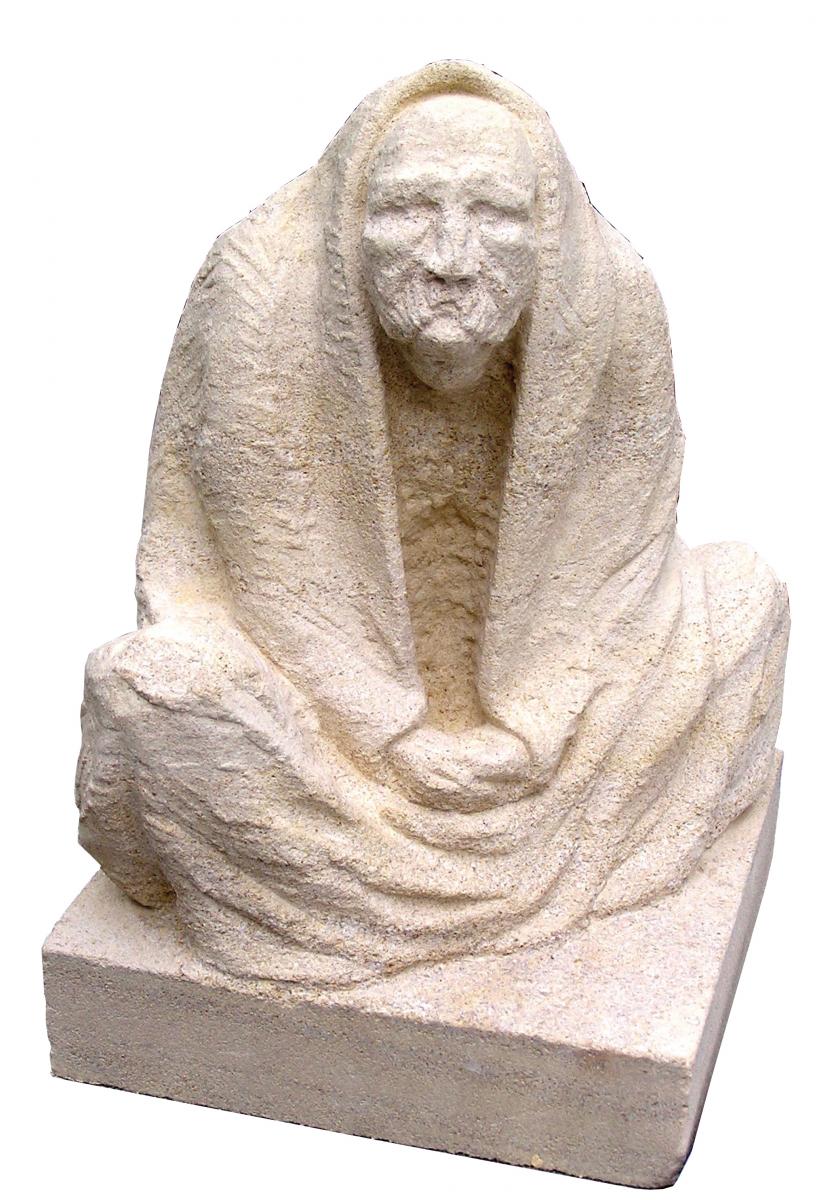 Events at the City & Guilds of London Art School took place over the weekend of 5-6 May and featured an exhibition of carved lettering, demonstrations of gilding and open woodcarving studios. The weekend also saw the first visit to the UK of master woodcarvers and gilders from the world leading Buddhist Sculpture research laboratory at Tokyo University of the Arts.

Particularly popular with the public was a Carving Competition organized by Senior  Stonecarving Tutor Nina Bilbey. It was along the lines of the carving festivals run at York, Lincoln and Gloucester in recent years with participants being given a theme around which to design original pieces in advance. They then have 11 hours during the two days of the event in which to realize their ideas as  completed stonecarvings.

The theme at the Art School was ‘Overground – Underground: London stations past and present’. It was a theme that elicited some exciting results, from the literal to the puzzling and cryptic.

The competition was generously supported by the Worshipful Company of Masons, the livery company of stonemasons, who funded a £300 prize for the best carving.

The contest was judged by Tony Webb, for many years Master Carver at  St Paul’s Cathedral. He works in both wood and stone and trained at the City & Guilds of London Art School back in the 1950s as part of the drive to train people to restore London’s war damaged historic monuments and buildings.

Stone for the competition was donated by Syreford Stone Ltd, the company that supplies the stone used for St George’s Chapel, Windsor. The School is associated with Windsor Castle through its ongoing annual Imaginative Grotesque Carving programme.

The winner of the award for best carving  was third year student Akira Inman, with his representation of the Blind Beggar of Bethnal Green. The beggar is known through a folk ballad telling the story of a medieval knight from the area who returned destitute from the Crusades. It is an obscure and little known story, despite the character appearing on the Coat of Arms of the local council. Akira felt the image, apart from being of historical interest also has a contemporary resonance, given the increasing incidence of homelessness on the streets of London.

There were two further chances for recognition in the competition, with both visitors and the carvers themselves choosing their favourite pieces. But the winner in both cases was… Akira Inman.

Despite strong competition from many other imaginative and professionally executed carvings, Akira’s piece was a clear favourite with the public, and tied with a woodcarving in the peer vote.

The carving competition has become such a success that the City & Guilds of London Art School has made it a regular fixture in the School year. “This is a tremendously popular event with the students,” says Tim Crawley, Head of the Carving Department, who is a celebrated stone carver in his own right.

“Following the success of last years’ stonecarving competition, the woodcarvers demanded to participate this year and the results were fantastic. Although it’s not part of the curriculum, it’s actually a hugely valuable exercise, given what the students learn about design and working to a tight deadline. Many are amazed by what they can achieve in the short time available and this can be a great boost to confidence. But above all its great fun and the atmosphere is contagiously upbeat and enthusiastic.”