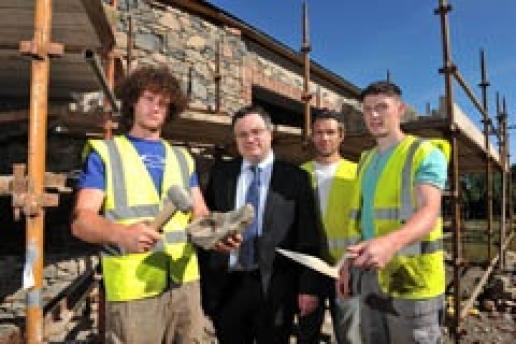 Northern Ireland Employment & Learning Minister Dr Stephen Farry has visited a building site in Cultra to see where two youngsters on the YES with stone specialist Art of Stone were working.

YES stands for Youth Employment Scheme, an initiative which is specific to Northern Ireland. It encourages people between the ages of 18 and 24 who have been unemployed for at least 13 weeks to work by giving them their benefits plus an extra £45 a week and travel expenses if they get a job.

That lasts for between two and eight weeks. Then, if they are up to the job and the company wants to keep them in a full-time capacity, the employer is given more than £5,000 for the trainee’s first year with them, effectively changing the unemployment benefit to an employment benefit.

Art of Stone has two youngsters on the scheme, Mark Lappin and Michael Brannigan, who chatted with Dr Farry about YES when he visited the Cultra site.

Fergus Rooney, who owns Art of Stone, is enthusiastic about YES. “It’s actually one idea that works,” he told Natural Stone Specialist magazine.

He has had trainees before, but says it can be a difficult decision to take them on because a skill such as stonemasonry is not something that people can be taken off the street to get on with. They have to be trained and while they are learning the skills they are not always contributing much to the company.

Providing training is a prerequisite of YES, so the youngsters obtain skills that will stay with them for the rest of their lives. Mark and Michael will go on courses to achieve their NVQs and Fergus is confident they will both reach Level 3.

He recruited Mark and Michael, who were keen to learn stonemasonry, then applied to the Youth Employment Scheme to get them on it. “It gives you a bit of buffer whilst you're bringing them up to speed,” he says.

The YES was launched by Dr Farry in July 2012 but Fergus says he only became aware of it this year when he was told about it by another employer in Downpatrick, where Art of Stone is based. He’s glad he did find out about it.

Having met the Art of Stone trainees, Dr Farry said: “I commend Mark and Michael on their success with Art of Stone and the way they’ve adapted their skills into the art of stonemasonry. It’s clear how YES has assisted them both into employment and it’s through employers like Art of Stone offering opportunities that young people can find employment or gain the employability skills.”

Since the launch of YES, more than 4,400 young people in Northern Ireland have participated in the scheme.

One of the trainees, Mark, said: “I have gained experience and many new skills. I’m more confident going forward and I would encourage other young people to get involved in this initiative. This has been a very positive experience for me.”

And Michael added: “I’m delighted to be in full time employment and would encourage others to get involved with the YES programme.”

Fergus Rooney says the two youngsters “have had a positive impact on my business”. And he is enthusiastic about providing training for them. “As an employer it has become clear in today’s market for my employees to need to have, or be working towards, an accreditation as this is beneficial when competing for tenders and up-skilling my workforce.”

If you are in Northern Ireland and want to get involved, further information about participating in YES can be found on NI Direct and there is information for employers at NIbusinessinfo.