Australian mason sues suppliers for not warning about silica dangers 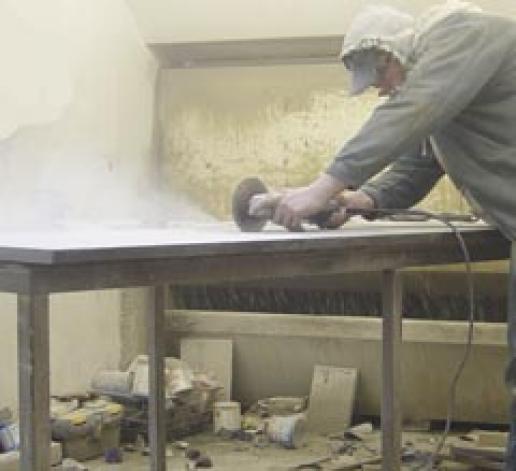 In Australia, a stonemason is suing 10 engineered quartz distributors for diseases he says he has contracted from dry cutting quartz for worktops, which is what is happening in the picture above taken in a workshop in England. The man cutting the quartz is not wearing a mask and is working away from the water wall so the dust is going into the factory where other people were working.

A stonemason in Australia is suing 10 distributors of engineered stone. He says working the high silica content materials has left him debilited with disease.

He is seeking compensation, alleging he was not warned by suppliers about the risks.

The matter is reported in the Gold Coast Bulletin of 9 August.

According to the report, 39-year-old Karl Bartosek, the father of two, has developed rheumatoid arthritis and silicosis, for which he has to take a daily cocktail of medications.

Karl Bartosek links his illnesses to long-term exposure to the respirable crystalline silica in quartz dust that he breathed when cutting the products dry. Engineered quartz contains more than 90% silica.

There have also been cases brought against quartz companies in America and some of the quartz manufacturers have reported provisions for law suits and/or compensation in their annual reports.

All natural stone contains silica but in engineered quartz, widely used around the world for kitchen and bathroom worktops, the silica levels are even higher than in almost all natural stones, including the granites that were commonly used for worktops before quartz entered the market.

Karl Bartosek told the Gold Coast Bulletin he had had to employ more people to cover his workload as the arthritis and lung disease became more debilitating.

“I used to coach my young fella in football. I can no longer do that and everyday stuff, you know. They’re boys and it’s a struggle.”

In March, an inquiry into coal workers’ pneumoconiosis in Queensland, Australia, concluded silica was “more dangerous than coalmine dust”.

Karl's lawyer is dust diseases expert Roger Singh from Shine Lawyers. He more commonly deals with asbestos cases. He believes this is the first time rheumatoid arthritis been linked to engineered stone but he says he is confident Karl's case will not be an isolated incident. Anyone who has experienced this problem can let him know – click here.

A report by John Cherrie of the Institute of Occupational Medicine, Edinburgh, on RCS states: "Epidemiological data also supports an association between RCS exposure and autoimmune diseases such as scleroderma, rheumatoid arthritis and systemic lupus erythematosus. Although, there was no clear exposure-response relationship evident for these diseases. The biological mechanisms linking RCS exposure to kidney or autoimmune diseases are unclear."

Karl Bartosek urges all stonemasons to get tested for rheumatoid arthritis as well as silicosis.

He says: "It would be good if anybody is starting to get these things (symptoms) to go see a doctor. The practices of cutting dry should be changed to cutting wet. No-one ever told me about the dangers of getting these diseases from the dust and (I want to) warn people you can get sick from it. It isn’t good. A lot of companies still do cut dry."