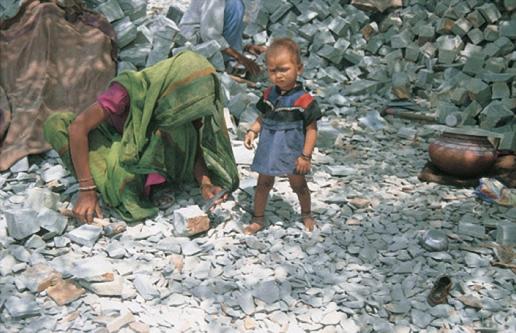 Update: On 3 September, the Observer newspaper reported that John Lewis and Habitat are among retailers that have stopped selling kitchen worktops, tiles and headstones made with Indian stone because of the slavery in quarries in India. Read more...

The move follows a report published by Dutch non-governmental organisations (NGOs) on 23 August saying conditions in some Indian quarries are deplorable.

The Dutch NGOs said half the granite and 10% of all stone exports in the world come from India, where quarries still have bonded and child labour.

The NGOs are Stop Child Labour, India Committee of the Netherlands, and Kerk in Actie (Church in Action). Their report is called The Dark Sites of Granite (download it here), which tracks child labour, bonded labour and other labour rights violations.

For the report, surveys were undertaken in 22 quarries. Among these were quarries in Chimakurthi of Prakasam district of Andhra Pradesh, where Black Galaxy is produced. Surveys were also undertaken at quarries in Karimnagar of Telangana, where Maple Red and Tan Brown granites are extracted, although they go mostly to China. Quarries in Mudugal in Raichur district of Karnataka were also surveyed.

Children were found at worksites and many adult workers said they had started work while just about 15 years old. Even though child work has declined over the years, this is still a concern, especially in Karnataka. Researchers also found that wage advances of up to 20,000 Rupees were used as a means to bind workers to quarries, so bonded labour (also known as 'modern slavery') was rampant.

The report says customers of the quarries include UK suppliers Beltrami, Blyth Marble, Grantech, KSG UK, Mistermarble and Nile Trading UK, as well as Cosentino and Levantina in Spain.

In a response to a draft version of the report offered to those mentioned in it, Beltrami states that in spite of its campaigning and sensitisation efforts towards its Indian suppliers, there is still a lot to be done to be able to obtain sustainably produced natural stone from India. According to Beltrami, gaining insight to supply chains at the level of quarries is challenging, as suppliers are reluctant to provide information about quarries due to competitive advantages they are afraid to lose. However, Beltrami says it urges its Indian suppliers of granite to be transparent about their supply chains and take effective measures to improve conditions in granite quarries.

In April last year the Modern Slavery Act came into force in the UK. It requires businesses with a turnover of more than £30million a year to include a report on what they are doing to tackle slavery in their supply chains in their annual reports. Although that will not directly impact most stone companies, it does impact companies they supply. And those clients, developers, architects and other specifiers expect their stone suppliers (and others) to contribute to the completion of their modern slavery statements by having checked their supply routes. Stone Federation Great Britain is helping its members supply the information required by creating an Ethical Stone Register.

The Modern Slavery Act was produced by Theresa May when she was Home Secretary and enacted after she became Prime Minister. She is proud that the UK is leading the world with legislation to help tackle modern slavery.

It is not easy to be sure stone from India, China and other parts of the world does not include modern slavery somewhere in the supply chain, but the more people who ask the questions the more producers in countries involved will realise international opposition to the practices is growing.

“Finding either child labour or modern slavery in the supply chain are two of the biggest reputational risks that any company will ever face,” says Ethical Trading Initiative (ETI) spokesperson Cindy Berman as the ETI publishes more free business guidance on Child Labour and Modern Slavery.

The guidance was posted on the ETI's website on 3 July and includes advice to help companies develop a deeper understanding of key concepts and legal responsibilities. Importantly, it also lists tools, tips and techniques for reducing and mitigating risk.

Companies are told how to:

"Understanding and addressing child labour can be a minefield for companies," says Cindy Berman. "Universally agreed and legally binding rights of the child are enshrined by the UN. Yet, while international standards are clear, the reality in some countries is too often different."

Depending on a country’s development status, the age that a child can officially start working full time may be as young as 14, and 13 for part-time work.

However, ETI regards the lower age range for full-time work as unacceptable.

When negotiating with suppliers, ETI is advising companies to set clear red lines that are consistent with its Base Code of labour practices and the highest international standards.

Cindy Berman said: “Child labour is a business-critical issue and addressing it is essential for a company’s credibility and legitimacy.”

With 80% of those working as slaves found in the commercial sector, ETI and Anti-Slavery International strongly advise companies proactively to look for 11 indicators of forced labour.

The indicators include, but are not limited to, retention of identity papers, withholding wages, abusive living and working conditions and restriction of movement.

Originally identified by the International Labour Organisation, a single indicator when taken on its own may not constitute slave labour. But, ETI and Anti-Slavery International believe, that when several are present they almost certainly do.

“The statistics are stark,” said Cindy Berman. “Not only is modern slavery a predominantly business issue, companies recognise it as such. Well over three-quarters believe that there is a likelihood of modern slavery occurring in their supply chains.”

The guidance not only lists the indicators but goes further by outlining what to look for within each indicator as well as cataloguing mitigation strategies.

Cindy Berman said: “It is important that companies exercise their leverage to reduce the risk of slavery in supply chains and influence suppliers’ employment practices. But they can only do this if they know what to look for and how to end exploitation.”