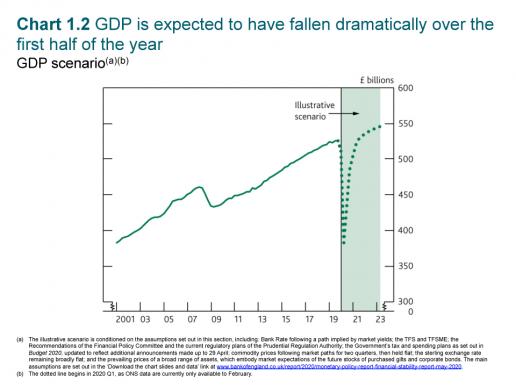 The Bank of England last week warned of the fastest and deepest recession in the UK since the 'great frost' of 1709.

Parliament was given more details on 11 May of the three-point 'roadmap' to a return to work from the Cornavirus lock-down in England. Scotland, Wales and Northern Ireland are going their own ways.

The Prime Minister presented the outline of a three-stage plan to get Britain back to work in a television Broadcast on Sunday (10 May). On Monday he faced Parliament as the government published more details of its plans in a 50-page document.

On television, PM Boris Johnson abandoned the 'stay at home' message in favour of 'stay alert' and outlined a plan for a return to work, with shops, restaurants and leisure facilities (but not pubs) re-opening and children returning to school.

In Scotland, Wales and Northern Ireland the message was not well received by the countries' administrations, which retain lock-down policies.

Ireland is still in lock-down but on the first stage of a five-stage plan for returning to work. It started its lock-down while the UK was still talking about 'herd immunity' and has already published a detailed plan for bringing it to an end. In Northern Ireland discussions are based on re-opening shops in June but requiring the wearing of facemasks in public.

The moves to return to work in England follow the publication of the Bank of England's Interim Financial Stability Report and Monetary Policy Report last week, which predicted a fall in GDP of 30% in the first half of this year, recovering to an overall fall of 14% for the year as a whole and getting back on track next year. For comparison, the 2008 crash saw GDP in the UK fall just less than 6.5%.

The Bank of England also predicted unemployment would rise to 9% (about 3million people), which has increased the call by business organisations for a continuation of the 80% furlough Job Retention Scheme but without the furlough, so companies still get the state support when staff return to work.

It probably will not happen because once it had started it would be difficult to end and the change in relationship between government, citizens and industry would, like a lot about this virus, be unprecedented.