Getting nasty at NAMM 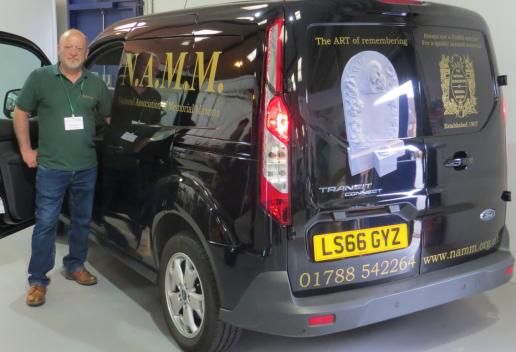 Peter Hayman of NAMM with the van he uses to deliver training. He has been more involved with NAMM management since Phil Potts resigned as National Executive Officer nearly three years ago.

NAMM (National Association of memorial Masons) does seem to have more than its fair share of internecine conflict.

The latest has stemmed from a three-day industrial tribunal last month (22-24 January), when former employee Louisa Cooper complained of sexual discrimination, breach of contract, unfair dismissal and not being paid while she was off suffering from stress. The tribunal found in favour of NAMM and dismissed the case.

Louisa Cooper claimed a procedure she had received training to carry out was given to a man (Peter Hayman) and that she was owed for the months she was off work suffering from stress when she was not paid.

Diane Gregory, the former Office Manager of NAMM, says a case she was bringing against NAMM that was due to be heard in September has been settled out of court so there will not be a Tribunal hearing.

At the same time, NAMM members were sent a letter telling them about the tribunal and asking if it was going to cost them an extra £1,000 each in subscriptions this year to pay for it.

It also asked other questions, such as why the memorial wholesalers chose not to exhibit at the NAMM trade exhibition in Warwickshire Event Centre last year (you can read about that here...) and why NAMM has not had a National Executive Officer since Phil Potts left nearly three years ago.

It asks why NAMM Management paid £40,000 for a website that "looks the same as the previous one".

It asks if it is true that NAMM Management does not speak to ICCM, the largest burial authority organisation, and "why does NAMM management seem to rub everyone up the wrong way, when we want them to represent us?"

On the final point NAMM responds that NAMM stands up for its members with "honest straight talking" and "if that rubs some people up the wrong way then that is not our problem".

Natural Stone Specialist magazine has also received several letters in a similar vein to the one sent to NAMM members.

NAMM has responded to the letter sent to members in a newsletter it sends to members. It tells members they will not be responsible for the cost of the tribunal. NAMM quotes its Memorandum & Articles, which state the liability of members is limited and every member undertakes to contribute such amount as may be required but not exceeding £10.

About its website, NAMM says it and the RQMF register for qualified memorial fixers paid separately for their new bespoke websites. The previous NAMM website was cut and pasted into a WordPress site, which is why it looks similar.

In a statement, NAMM President Russell Brooks says: "NAMM has overcome many challenges over the past 18 months and I am pleased to say that we have now put in place many improvements that put NAMM in a strong position moving forwards.

"We have made changes to the NAMM admin and office infrastructure which has drastically improved and streamlined the way we work, whilst we have also developed new City & Guilds assured training, which offers the opportunity for continued growth. The changes I believe show that NAMM has a very positive outlook for the future."

If anyone has anything to add, please do send us your comments using the form below.