WFF meets in the Midlands 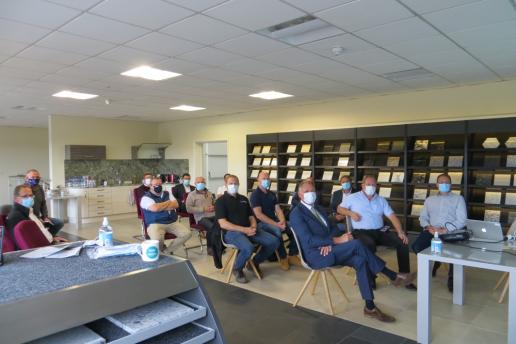 The Worktop Fabricators Federation (WFF) that was launched at the KBB exhibition at the NEC, Birmingham, in March just before the Coronavirus lockdown, was trying to resume the momentum of the launch at its first post-lockdown meeting yesterday (10 September).

The meeting took place at the premises of Beltrami, the stone wholesaler, in Halesowen, Birmingham, which will shortly be changing its name. The Belgian company of Beltrami 'merged' with fellow Belgians Brachot-Hermant in 2017. Brachot-Hermant also has a depot in Birmingham (in Erdington). Since the merger the two companies have continued to trade under their own names, but now Brachot-Hermant is rebranding and the Beltrami name is being dropped. The Beltrami depot will be re-named Brachot Halesown. It is expected Halesowen and Erdington will combine in one place in due course, possibly into new premises, although that will not happen for a year or two. Brachot says it wants to see what Brexit brings before it decides. The Beltrami name will continue to be used on the Continent for tile and road construction products.

In order to maintain social distancing at the WFF meeting there were, in fact, two meetings: one in the morning and one in the afternoon. The windows in the first floor meeting room were open (it was a warm day in any case) and Beltrami supplied masks and hand sanitisers for those who did not have their own. It also recorded all the names and telephone numbers of those who attended.

The day ended with the WFF having signed up some new members and others commiting to join.

The WFF has lately lost two of its five founding directors as their businesses, Prima in north London and Granite UK in Hertfordshire, have been sold to the rapidly expanding Birmingham company NeoGranite (you can read more about NeoGranite here). The remaining directors of the WFF are Mark Mills of Stone System of London, Andy Phillips of Affordable Granite in Surrey and Simon Souter of LBS in West Sussex. You can read about the founding of the WFF here.

There will be a report from the WFF meeting, as well as news about the Brachot-Hermant plans and the expansion of NeoGranite in the next issue of Natural Stone Specialist magazine. Click here to subscribe to NSS.