Caesarstone chosen for 3,000 Bloor homes - but who will make the worktops? 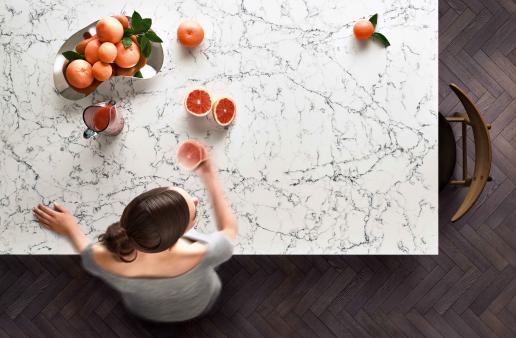 Caesarstone's White Attica, one of nine finishes chosen by Bloor Homes for kitchen upgrade offers in 3,000 new builds in the next 12 months.

Caesarstone has been chosen by Bloor Homes as the exclusive kitchen worktop upgrade supplier for more than 3,000 new builds to be completed in the next 12 months.

Caesarstone has signed a contract giving it exclusivity on the Bloor properties when buyers want to upgrade from standard laminate to quartz kitchen worktops.

Nine Caesarstone designs have been selected. They include 4141 Misty Carrera, 2003 Concrete and 5143 White Attica. Caesarstone products will be displayed in 90 marketing suites and show homes across the Bloor Homes estate, allowing prospective buyers to see how they could upgrade their kitchens.

Gareth Lowden, Commercial Manager Housebuilders & Developers at Caesarstone UK, says: "We are delighted to be working with Bloor Homes. This contract is another in a growing list of similar, very successful Caesarstone partnerships within the housebuilding sector. The kitchen is a key space for consumers when buying a new home and the worksurface is one of the largest components within it. As the UK quartz market continues its rapid growth, there is an increasing expectation for the material to be an option for buyers and its inclusion in a property’s specification drives consideration."

Caesarstone products are available in five price groups, making it a viable option for all developments.

Mark Powell, Group Sales & Marketing Director at Bloor Homes, says: "We are very pleased to be able to offer Caesarstone quartz worktops. Buyers today want a stake in the design of their new home, which means presenting them with choices that allow them to personalise it. Caesarstone will sit alongside the other high-end components and cabinetry offered by Bloor Homes."

Bloor Homes, which lays claim to being the UK’s largest privately-owned housebuilder, is celebrating its 50th anniversary this year. It has been awarded five-star builder status in the Home Builders Federation (HBF) annual Customer Satisfaction Survey.

Founded in Measham, Leicestershire, in 1969, Bloor Homes currently has 60 developments in progress or coming up from Lancashire to Devon and into the South East of England. It has seven regional offices. In its five decades of development, Bloor Homes has created hundreds of communities, building not just houses, but schools, transport infrastructure and green spaces as part of its developments.