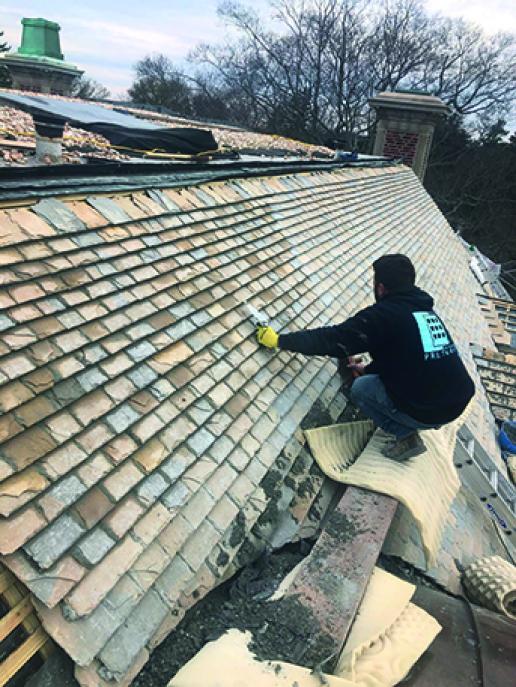 The new Collyweston roof going on to Westbury House.

Possibly the only place Collyweston slate roofing has been used outside of the UK is on a mansion in New York’s Long Island called Westbury House.

And about 55 more roofing squares of it (around 500m2) have now gone there to comlete the renovation of the roofs of the building as part of a major refurbishment.

The limestone roofing comes from the mine of company Claude N Smith, run by Nigel Smith, in Northamptonshire, one of only two remaining producers of the stone.

Four of the company’s roofing experts went to Long Island to lay the new roofs because of their experience of using the Collyweston stone. One of them was Arthur Osborne, the great-great-grandson of a slater who sailed from England in 1905 for the installation of the mansion’s original roof.

The reason the mansion was given a Collyweston roof was because the man who paid for it, John Phipps, who was associated with the Carnegie empire, had promised to build his wife, Margarita Grace a Restoration style country house.

Margarita's family, which owned the shipping line that became the Grace Steamship Company, had moved to America from England and she wanted built to the style to remind her of her homeland.

To keep his word, Phipps turned to the Londoner George Crawley, a passionate student of design but with no formal architectural training. To help him realise his vision, Crawley was paired with Grosvenor Atterbury, who was an architect.

Between them, they created the symmetrical elegance of Westbury House, with its red Virginia brick, cream-coloured Indiana limestone and terracotta cornice. Its crowning glory was the gold-hued Collyweston slate.

Unfortunately, says Nigel Smith, it was bedded in with hard cement. How that accelerates the decay of limestone is well recorded, which is why it needs to be replaced after only 115 years. This time, says Nigel, it will be bedded properly with lime mortar so it will last longer. Nigel and five of his roofers have returned to complete the project they started in the autumn now the weather has improves. Nigel says the work will be finished in time for the building’s re-opening to the public in April.

The slate is made from a limestone found in a narrow, metre-thick seam 12m beneath the earth in Collyweston.

Below. Westbury House on Long Island, New York. Possibly the only property outside the UK to have a Collyweston roof. 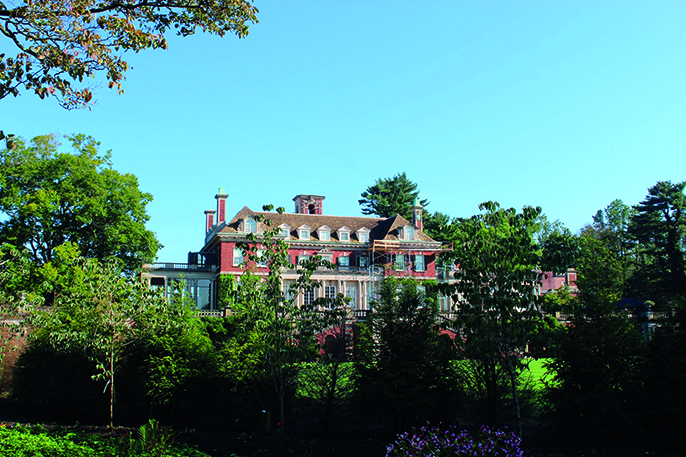