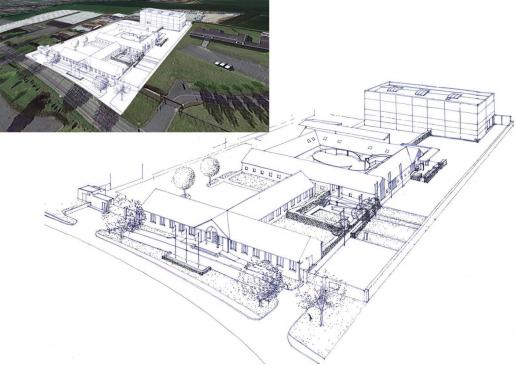 The Commonwealth War Graves Commission’s first visitor centre is due to open in France next spring.

A year from now visitors to the war cemeteries of northern France will be able to gain a fascinating insight into the work of the Commonwealth War Graves Commission (CWGC), which maintains graves and monuments to 1.7million men and women of the armed forces who died in action around the world.

For the first time visitors will be able to see the Commission’s team of skilled craftsman, including its stonemasons, at work. They will be able to tour the workshops and watch as the task of caring for some of the world’s most impressive and recognisable monuments and memorials is carried out.

This is being made possible by the construction of the CWGC’s first ever visitor centre at Beaurains in France, an hour’s drive from the channel ports.

The centre is being built with the help of £700,000 from the fund established by the government to redistribute fines paid by the banks for illegally fixing interest rates.

The visitor centre will provide a snapshot of the work of the Commission at more than 23,000 sites worldwide where it continues to commemorate the final resting places of the war dead.

During tours, visitors will be able to watch the headstone production team using 21st century computerised Accurite saws from the UK machinery supplier and Incimar machines that cut the carefully crafted regimental badges and personal inscriptions into the distinctive headstones. It is this work that ensures the names and legends of the men who died remain legible.

The highly skilled team of blacksmiths, stonemasons, carpenters and horticulturists based at the visitor centre will offer visitors demonstrations showing how the restoration and conservation of CWGC sites designed by some of the 20th Century’s most influential architects is carried out.

The work of the Commission is far from over. As well as maintaining the monuments and memorials, the CWGC team in France still help local authorities recover newly revealed dead from the battlefields of two World Wars on an almost weekly basis. A fascinating exhibition will show this work, from the recovery of the body to the final reburial.