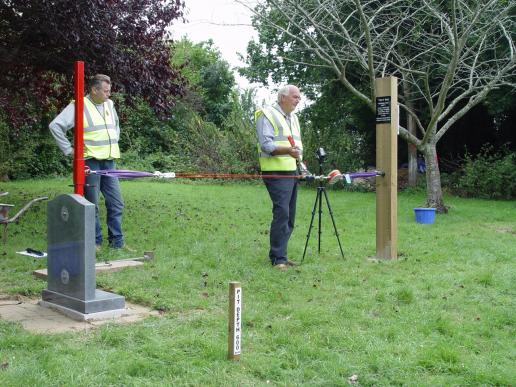 Now BSI has said this is how memorial fixing systems should be tested, in a pit 1m x 1m and 1m deep. It is written into the new British Standard 8415.

The 2018 version of BS 8415, a specification for memorials in burial grounds and memorial sites, has been published.

It has taken longer to produce than had been intended because some of the issues involved were controversial, particularly the fixing of memorials and the testing of systems used to fix them.

When the standard was put out for public consultation at the end of last year there were more than 160 comments. Even after they had been considered and the proposed standard amended as necessary, there were more comments.

The draft standard included a testing method for fixing systems that involved digging a pit and filling it with medium / coarse sand and fine gravel. At one point it looked as if that might be changed (read more...), but the method is included in the standard as finally published.

This is the system used by Anton Matthews to demonstrate the efficacy of his Stone-Safe memorial stability system compared with ground anchors simply hammered into the ground through a foundation, like those approved by NAMM. The Stone-Safe type of fixing using dug holes filled with mortar to support a metal reinforced concrete beam through which bolts pass to secure a headstone and its base is included in the new standard as an example of fixing.

Anton says the dug pit method of testing fixing systems was what he was advised to use by the British Standards Institution (BSI), which oversees the standards. You can watch one of his demonstrations here.

This is not how the National Association of Memorial Masons has tested the fixing system that it has approved and included on its list of approved fixings. That list is available as a PDF on its website here.

In order to comply with the new version of the British Standard, fixing systems will have to be tested again under the conditions now specifically outlined in the standard. The Blast Shop, which supplies some of the ground anchors used by memorial masons, has already said it might reduce the number of alternatives it offers so it does not have to get so many re-tested.

The Standard is advisory rather than obligatory, although most insurance companies require work to be carried out to current best practice and a BSI standard will often be considered to constitute best practice. Some memorial authorities also require memorials and their fixings to comply with the Standard.

NAMM has always said ground anchors are not supposed to prevent headstones from moving but are intended to avoid them failing catastrophically – in other words, collapsing on someone.

So although they might lean, and might eventually be pulled flat on the ground, they will not suddenly topple on to people and injure them.

They have consistently argued that since ground anchors were introduced as the accepted method of fixing headstones there have been no injuries resulting from the failure of the fixing system.

Copies of the standard cost £198 from BSI (£99 for BSI members). They can be purchased on the BSI website here.